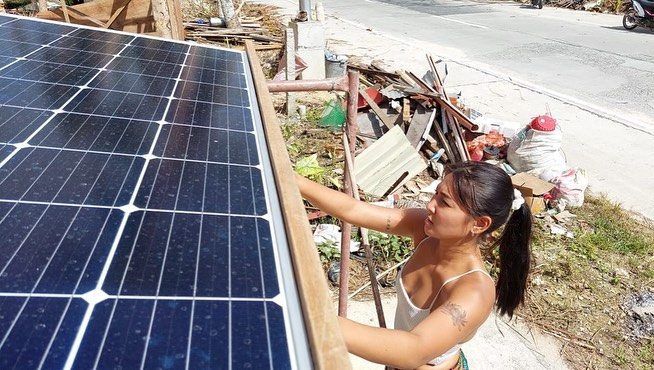 MANILA, Philippines – Nadine Lustre made her way back to Siargao Island on Thursday, December 23 to help with relief operations in the aftermath of Typhoon Odette, which razed the island and other areas in southern Philippines.

Nadine, who had been living between Manila and Siargao in the past few months, helped install a solar charging station along with members of Greenpeace. The station was put up in Barangay Malinao, allowing residents to charge gadgets and lights while electricity has yet to be restored on the island.

The actress was also seen in photos posted on Facebook by Christophe Bariou, Nadine’s rumored boyfriend and founder of Siargao resort Maison Bukana.

In his post, Christophe said they were “working day and night here to set up, coordinate and secure distribution points for reliefs goods especially rice and canned goods.” Christophe himself was in Siargao when the typhoon hit, and said in a previous post that he will be staying there “to help as much as possible.”

According to and Instagram story of beauty queen Rachel Peters, Nadine also delivered letters to Rachel’s family on the island.

Typhoon Odette made landfall in Siargao on December 16, leaving behind a trail of destruction – homes and shelters destroyed, trees and electricity poles uprooted, communication lines down, and at least 19 people dead.

While tourists and other residents have been evacuated, many locals remain on the island, with limited water and food sources, no shelter, and no electricity. – Rappler.com