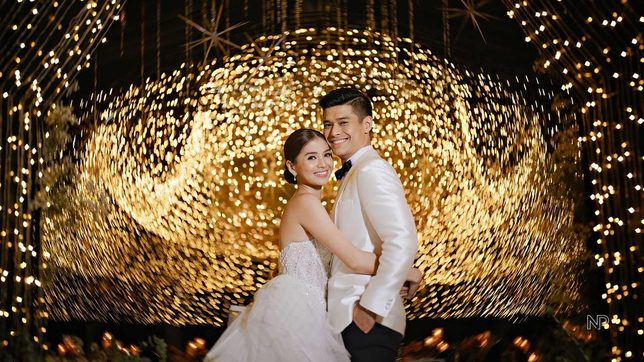 Nice Print Photography shared the first official photos of the ceremony on Tuesday, September 21. “The stars finally aligned for @akosijcdeberat and @rikkahdevera,” they wrote in the caption.

In separate posts, the newlyweds were also seen posing at their grand reception area, with the official photographer saying that the wedding was “celestial themed.” The actual date of the wedding ceremony remains unclear.

JC also took to his Instagram stories to share some well wishes and snaps from the ceremony. In one of his posts, the actor said that the wedding was “three years in the making.”

In March 2021, JC revealed in a vlog with actress Erich Gonzales that he’s been married to Rikka since 2018, before the arrival of their daughter Lana.

(What happened is we had our civil wedding then she gave birth to Lana. We were supposed to have a church wedding after Lana was born but then the pandemic happened. So it was moved to this year.)

The actor added, “Hindi talaga ako iyong ma-announcement. Pero hindi naman siya secret (I’m not the type of person to make announcements but I didn’t keep it a secret). I always tell everyone (if they ask if I am married).”

JC and Rikka have a three-year-old daughter named Lana Athena, whom JC first shared photos of in July 2018.  – Rappler.com