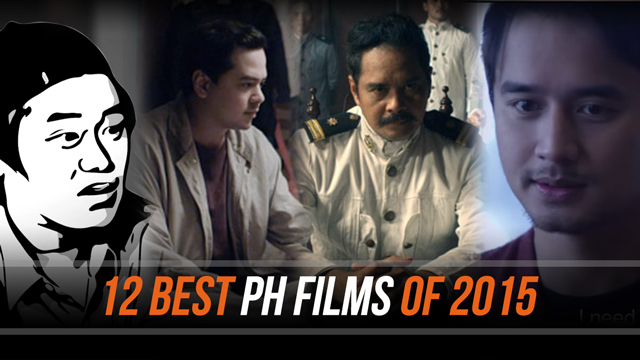 MANILA, Philippines – It was a year brimming with good films.

As with 2014, a bulk of the Filipino films worth watching came from the annual film festivals that give grants to filmmakers.

From the first edition of Sinag Maynila, audiences were offered a wild experiment in time and space in Remton Zuasola’s Swap, and a simple parable that is well told in Zig Dulay’s Bambanti.

From QCinema International Film Festival, there is Lem Lorca’s Water Lemon, a somber examination of rural boredom, and Chuck Gutierrez’s Iisa, a daring look into the lives of leftists at the time of tragedy.

From Cinema One Originals, there is Ara Chawdhury’s Miss Bulalacao, an offbeat tale of a gay man who miraculously got pregnant.

From the New Wave section of the Metro Manila Film Festival, there is King Palisoc’s Tandem, a well-crafted crime thriller.

Interestingly, the bigger film studios, infused with a renewed openness for innovation, perhaps as a result of the success of Antoinette Jadaone’s That Thing Called Tadhana (2014), came up with films that manage to mix commercial intentions with some semblance of inventiveness.

Chito Roño’s Etiquette for Mistresses takes a spin at the very tired genre of mistress movies by separating the paramours from their lovers, turning them into the human beings they were before they were exploited for ticket sales.

While Jadaone’s All You Need is Pag-ibig is utterly delightful as it plays around various manifestations of love, Dan Villegas’ Breakup Playlist dissects the dissipation of love in a romantic relationship.

Finally, there are the films that are produced outside any of the established systems.

As mentioned, it was a year of good films, and there is simply not enough space to discuss in detail each of the several films mentioned. The following 12 films, however, would summarize the astounding quality and diversity that the year offered in terms of films:

The journey of Kidlat Tahimik’s Balikbayan #1 Memories of Overdevelopment Redux III is an admirable story of perseverance. What started out as a film about the adventures of Enrique, the first person to circumnavigate the world, mutates into something completely different, something absolutely bizarre and wonderful. As its offbeat title suggests, the film is a monster that is stitched from all the remnants of Kidlat Tahimik’s illustrious career. The original Memories of Overdevelopment, originally a short film that has the filmmaker narrating what could have been the feature length film about Enrique over footage, is framed within the story of a man who is searching for a mysterious man he met on the beach. The not-so-traditional narrative gives way to performance art. It all works marvelously, resulting in a film that serves as a valedictory for one of the world’s most important filmmakers ever.

While On the Job, its thematic predecessor, has codes of action films to sustain being an adroit piece of entertainment despite its grave explorations, Honor Thy Father is austere and almost humorless. It consistently carries a severe tone of desolation from start to finish, badgering its protagonist, played with adamant conviction by matinee idol John Lloyd Cruz, with a barrage of conflicts that put him in an overwhelming state of despair. Its unflinching depiction of a world where all men differ only in the gravity of their sinfulness can only shock and batter the senses up to the point of absolute fear, not for the fate of the father whose only wish is to protect his daughter, but for this nation, whose state isn’t that different from the fictionalized one the film is set in.

The pleasures of Sherad Anthony Sanchez’s Salvage are apparent. It is first and foremost a horror film, one that sufficiently uses almost every cliché in the book to deliver a respectable amount of scares. The film also operates in a different level. By pitting a television crew with the unknown dangers of Mindanao, it probes on the abject cluelessness of imperialist Manila with the affairs of the South they only know of from sensationalized news. Sanchez’s film is bewildering because it can only aspire to be strange and unusual as it works best when it puts its viewers in the same position as its characters who dared to invade territories their egos do not allow them to comprehend.

Dayang Asu paints a very bleak portrait of a country thriving in corruption. The anger and frustration director Bor Ocampo harbors for a culture that can’t seem to separate itself from evil is felt in every frame, even the ones that have been painstakingly designed by cinematographer Albert Banzon to evoke a strange gleam of elegance that is rare in films that exploit a world drowning in amorality. The film examines the connections between top-tier criminality and everything else below, and the accuracy of the various sketches of people descending down the path of sin is as impressive as it is frightening.

Everything is veiled in snow in Lawrence Fajardo’s Imbisibol. The film expands Herlyn Gail Alegre’s one-act play to further tackle the lives of various Filipinos living and working in Japan but are now in danger of being deported because of new legislation. Fajardo and screenwriter John Bedia enlarge the characters, giving them stories that mold their humanity by magnifying their harsh imperfections. In the end, the film becomes a multi-faceted exploration of men and women who are forced to act in the face of self-preservation. Nationality and culture are thrown out the window, and everything is at once local and universal, because in this world that prospers in practicality, you can only be allied to yourself.

The connections between the various sounds and images of Pepe Diokno’s Kapatiran are more imagined than real. The film, which starts out with a lo-fi video of law students goofing around before surrendering into an anarchic montage of scenes featuring fraternity initiations, poverty, government corruption, bored rich kids, and other random events, only makes sense with the help of one’s own fiction. Perhaps Diokno’s goal was to discredit the fraternities that he originally chose to depict as organizations whose connections are as fleeting as his visuals are. However, the film’s ambitions are greater. His target is a nation and its inexplicable chaos, and by stringing everything that is tainted in the metropolis, Diokno has assembled a narrative of disarray that is but apt.

Mario Cornejo’s Apocalypse Child is a film about myths and the events that shatter them. The titular character, a grown man who as a child was led to believe that his father is a Hollywood director, is in between various loves and friendships. Everything feels transient. Even Cornejo’s direction is bolstered by the way it treats its narrative with the same level of commitment its characters treat each other. The film wanders in various directions until it just stops, with each of the characters who chose to become tangled in life’s foolish game getting irrevocably devastated. Things cohere, and one can’t help but be at awe at what Cornejo has achieved – a film as personal as it is grand.

Carl Papa’s Manang Biring is a feat of artistic integrity. The film, which plots the final few months of a cancer-stricken woman, is one that could have done away with the painstaking process of being animated. Papa nevertheless commits to his ambition, proving that it is not one borne out of creative whim but of principle. The world of Papa’s film is one that is purposely deprived of color, perhaps to evoke the monotony of life that only leads to certain death. Yet when the woman who cheats for a living is given news that forces her to first, attempt to cheat death, and later on, herself, to give happiness to someone dear to her, the film pops with the subtlest of colors, a miracle that would have been impossible if the entire thing was done in a traditional manner.

Prime Cruz’s Sleepless isn’t a romance, although it is draped with similar grooves and intentions. It is essentially a vigorous portrait of a city in a perpetual state of wakefulness. It focuses on the lives of two insomniacs who start out as co-employees and end up as each other’s could-have-beens. It aches as much as it delights. However, it is the call-center setting, aptly stylized by Cruz and screenwriter Jen Chuaunsu without losing its relevant social context, which gives the story of a painfully platonic relationship all of its poignant nuances.

Ari: My Life with a King takes its cue from Christopher Gozum’s Anacbanua in celebrating a language in danger of being obscured and the poems that serve as evidence as to why the language’s slow passing is an unfortunate thing. Catu treads a more familiar path and locates his advocacy within the story of an unlikely friendship between a teen and a celebrated poet. This allows him to explore his themes with great emotional heft, granting the dying art the same love and dignity that is usually reserved for loved ones.

Alvin Yapan’s An Kubo sa Kawayanan has a tight cast of 3 –  a woman who is far too in love with her house and her two suitors, a man who is leaving for opportunities abroad, and a documentary filmmaker who is returning to his homeland because of its wealth of subject matters. Despite its economy in characters and storytelling, it bursts with pulsating sensuality which it owes to its bizarre melding of folkloric charm and quiet visual splendor. Yapan, however, isn’t interested in empty eroticism. The film is more a critique of provincial mindsets in this contemporary age that favors convenience, than it is just an inert piece of sensuous art.

History is the most influential piece of fiction. Jerrold Tarog’s Heneral Luna takes that concept to heart as it uses one of the supporting characters of the Philippine revolution to wage its war against the nation’s suffocating addiction to complacency. The genius of Heneral Luna is that it molds the narrative into something that is accessible even to the most clueless of viewers. His protagonist is endearingly brash but virtuous. His antagonist is authoritative but conniving. That they are all familiar figures who most Filipinos know from lessons required in school adds to the scandalous flavor of Tarog’s further fictionalization of our grotesque national fiction. – Rappler.com