‘ML’ Review: History in the maiming 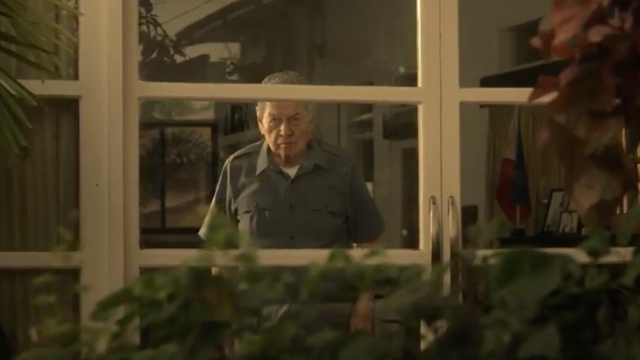 There is more to the old uniformed man played by a very intuitive Eddie Garcia than meets the eye.

Beneath the usual niceties of tipping his favorite barber before authoritatively dismissing him with a distinct hand gesture is a man with a story. He returns home only to be greeted by the incessant barking of a neighbor’s dog. He comes out with a bowl of dog food. What seems like an act of generosity that is consistent with what he’s shown his barber is actually a foil for the depraved act that he is about to commit. He has also brought out a hammer which he eventually uses to kill the poor dog.

Evidently, this old man is evil.

The film shifts from quaint suburbia to a classroom where an impassioned history teacher is trying to make his students understand the wrongs of the Marcos regime. The students however would have none of the highbrow explanations of their professor, insisting that the extreme methods of the late dictator are but necessary in a country that sorely needs a healthy dose of discipline. Instead of arguing further, the professor assigns them to interview any person who has lived through Martial Law. Poor Carlo (Tony Labrusca) decides to interview the old man and becomes one of his victims in his delirious reiteration of one of his torture sessions from when he was still an active military officer.

ML is blunt and brash.

It is also unabashedly didactic. It knows its intentions and doesn’t hide behind artful subtleties. Instead, it shocks and rattles, absolutely aware that the most effective way to portray the horrors of a history that is woefully being forgotten is through horror. Mique however doesn’t recruit ghosts and ghouls but instead molds an indelible character that becomes representative of a very conspicuous evil that is threatening to harm the very people who foolishly support it by virtue of their youth and ignorance.

The film is refreshingly direct, leaving no room for interpretations to the importance of its visualized brutality. There is very real and painful history in all of the film’s stylized maiming.

Even more interesting about the film is the motivation behind it. ML is a film that is a product of the times, a reaction to how a generation is conveniently being brainwashed into believing that there is a point to all the politically-motivated abuses. There is more than just a whiff of frustration in its depiction of clueless college boys about to experience the comeuppance to their disregard of the pains suffered by the nation in its not-so-distant past.

Thankfully, Mique doesn’t rely on just his motivations. Even without its political implications, ML is a fine example of transgressive horror.

There is consistent and palpable tension. The performances are all credible, with Garcia contributing the most to the consistent build-up of anxiety that Mique masterfully orchestrates with his clever plotting. Even more importantly, ML has a very apt cruel sense of humor. The film knows that it is audacious, that there is a certain ludicrousness to its twists and turns, and that there is an incredulousness to its exaggeration of the generational clash.

ML is a thoroughly engaging film.

It pushes the envelope, sometimes to the point of being distasteful. However, it doesn’t do so irresponsibly. There is reason to all the madness. – Rappler.com