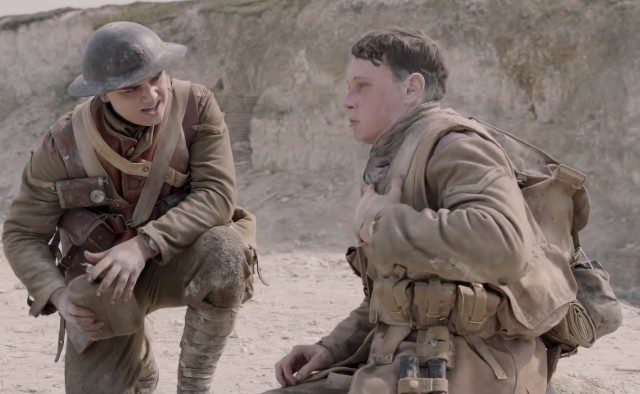 Facebook Twitter Copy URL
Copied
The movie, directed by Sam Mendes is inspired from the tales of his military veteran grandfather told to him as a child

LOS ANGELES, USA – Sam Mendes’s 1917, an innovative and deeply personal portrayal of World War I, has exploded into Oscar contention following its dramatic wins at the Golden Globes.

The movie – inspired by tales Mendes’s military veteran grandfather told him as a child – follows two British soldiers on a perilous mission across no man’s land.

They must risk near-certain death to deliver a vital message ordering a calamitous planned attack on German lines be aborted.

The film won best drama, the Globes’ most prestigious prize, on Sunday, January 5 as well as best director for Mendes – fending off frontrunners such as Martin Scorsese (The Irishman) and Quentin Tarantino (Once Upon a Time… in Hollywood.)

“It’s the biggest team effort ever,” co-lead actor George MacKay told AFP moments after the top prize was announced, adding that he was “thrilled, proper thrilled.”

In a radical filmmaking experiment, Mendes and cinematographer Roger Deakins shot footage that glides from trenches to crater-filled battlefields and through a devastated French town, in what appears to be almost one continuous shot stretching for two hours.

“They’ve never made a film in one continuous take. None of us have,” Dean-Charles Chapman, the film’s other leading actor, told AFP at a Beverly Hills event hosted by BAFTA, Britain’s version of the motion picture Academy.

Chapman and MacKay described how they rehearsed the scenes for 6 months, “reading the scenes in an open field” as they paced out their movements and dialogue until they became muscle memory.

Meanwhile, an intricately detailed set of exactly the right scale was constructed around them.

“Slowly the set would become a trench, and then we’d adjust the size of the set around the scene. And we’d do that with every single scene – it took 6 months to do.”

The bold approach clearly paid off as victory at the Globes, which open Hollywood’s award season, has seen odds for 1917 at next month’s all-important Oscars slashed.

It is expected to compete for best picture, best director and multiple technical categories – although its relatively unknown stars are not in the awards conversation.

Mendes said he deliberately cast actors who were not “big movie stars” to help audiences empathize with them – and keep viewers guessing about whether they would survive.

“Maybe both of them will be killed – I don’t know. Whereas if it’s Leonardo DiCaprio, then perhaps you know he’s going to survive,” Mendes told AFP in Paris last month.

Chapman is best known for playing child king Tommen Baratheon in Game of Thrones, while MacKay had a supporting role in 2016 comedy Captain Fantastic.

While 1917 does feature British stars including Colin Firth, Benedict Cumberbatch and Andrew Scott, they are confined to smaller roles.

The basis for the plot was a particular story Mendes’ grandfather Alfred told him about serving as a messenger on the Western Front.

This was supplemented with other real accounts of the war taken from letters, diaries and other research.

“I suppose it is my most personal because it comes directly from me, although I feel that I never made a movie that wasn’t personal at some level,” said Mendes.

The film turned out to have personal connections for its actors too.

Chapman told AFP how his research for the role of Lance Corporal Blake led him to uncovering his own great-great-grandfather’s journal entry in a book called The Western Front Diaries.

The actors also visited France and Belgium to see the actual war sites. The film was shot in England.

The collaborative nature of shooting 1917 mirrored the subject matter, as the actors learnt about the appalling experiences their ancestors had endured together in the trenches, they explained.

“There was lots of themes emotionally and literally, about the story and what the characters go through, that were entwined in the making of the film,” said MacKay.

“It’s a wonderful thing where the specialness of that experience aligns with it being received so positively,” he added. – Rappler.com