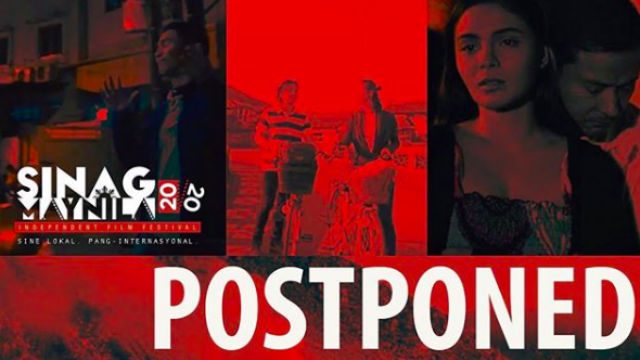 MANILA, Philippines – Organizers of Sinag Maynila film festival announced on Tuesday, March 10 that they’ve postponed the event as a precaution against the rising coronavirus cases in the country.

The festival was originally scheduled to open on March 17 and run until March 24.

“The screening of all these will be deferred to a still undetermined date. The organizers have also postponed the parallel events such as the film appreciation talks, post-production lectures, filmmakers’ fellowship, and the Gabi Ng Parangal at Conrad Hotel,” the organizers in posts on the festival’s social media accounts.

The Kingmaker, which was supposed to screened from March 18-24 will instead be released starting March 25 in selected cinemas.

“Sinag Maynila’s distributor Solar Pictures would like to thank all of the festival’s sponsors and partners for supporting the decision to postpone the festival at this time. The company assures the participating filmmakers, film enthusiasts, Sinag Maynila followers, and the Filipino film community that the independent filmfest will definitely be held at a more opportune time.”