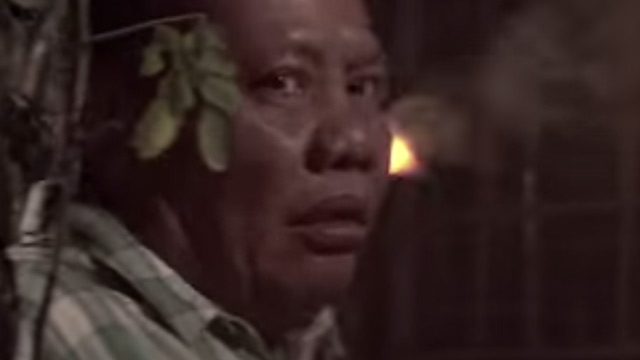 Facebook Twitter Copy URL
Copied
Entertainment writer Oggs Cruz says that while the film does look unappealing, its best asset is its humor

To completely appreciate the allure of Joven Tan’s Echoserang Frog, one has to understand the career of Shalala. Shalala, who presumably got his nickname from the erstwhile Vengaboys hit, rose to some sort of fame as the sidekick of German Moreno in his late night-early morning show Walang Tulugan. He left, causing a temporary rift between him and Moreno, and proceeded to make a name for himself against all odds.

See, Shalala is an unlikely movie star and an even more unlikely lead. His appeal is reliant on one’s tolerance to noise and kitsch. With his occasional shrieks and gaudy attire, he is most likely to offend than attract. Despite that, he seems to have clawed his way to some sort of success in the entertainment field. It is his particular position in current local show business as a curious anomaly that makes up the core of Echoserang Frog.

Shalala dreams of graduating from obscurity. When he learns of a possible inheritance from a very distant relative, he proceeds to borrow money and blindly initiates his quest to make his debut feature. For every step, his seed money gets smaller and smaller because of expenses both inherent to filmmaking and irrelevant to it.

Tan gamely borrows from television sitcom Two Broke Girls to document Shalala’s dwindling budget. He also takes some cues from Larry Charles’ Borat (2006) without of course the grand deception and accompanying pranks, with the flimsy tale of Shalala’s obsession overtaking his relationship with his best friend, played by Kiray Celis.

Let’s be honest however. Echoserang Frog is a horrendously crafted film. Despite having two cinematographers being credited for its look, the film is visually drab, with scenes seemingly lacking of any creative insight. The easiest thing to do is to accuse the film of being an amateurish effort, meant only to cash in on the bizarre appeal of its star, Shalala.

Fortunately, the film’s unappealing look, whether it be a product of creative design or not, is apt. Echoserang Frog is after all about Shalala’s attempt to make his film starring himself. Considering that the attempt involved a lot of sidesteps and blunders, a film that had some semblance of gloss or sleekness would feel both false and forced. There is a discreet charm to the film’s absolute lack of sophistication. It could perhaps even be the film’s biggest joke.

Humor is definitely Echoserang Frog’s biggest asset. A lot of jokes do not work, either because they require specific knowledge of pop culture references or simply because they just weren’t executed properly. The jokes that do work however are absolutely hilarious. More importantly, unlike Marlon Rivera’s Ang Babae sa Septic Tank (The Woman in the Septic Tank) which covered similar areas, Echoserang Frog does not feel like it is mining humor at the expense of others.

Self-deprecation is the key. Shalala allows himself to be the subject of ridicule. In fact, in the film’s post-credit sequence where he lampoons the anti-camcording ads that regularly screen in cinemas, he even pokes fun at the possibility that nobody would be interested to pirate his film.

All the other celebrities who had cameos in the film are in on the self-deprecation, playing caricatures of themselves all for the sake of fun. Odette Khan becomes the queen of overacting, while Jaclyn Jose exemplifies the opposite. Lav Diaz is the self-important savior of Philippine cinema, mumbling his goals for cinema to the detriment of Shalala’s very meager understanding.

Echoserang Frog is clearly not the film that Jose Javier Reyes is gushing about at the start of the movie. Echoserang Frog is not made to raise Philippine cinema to greater heights, or to cure poverty, or to win awards. It is what it is, a product of whimsical ambition by its titular hero. Thankfully, there is also quite a clever conceit underneath all the nonsense. – Rappler.com