‘The Amazing Spider-Man 2’ review: The enemy within

May 3, 2014 9:12 AM PHT
Zig Marasigan
Facebook Twitter Copy URL
Copied
Despite all of the film’s slips and dips, when it flies, it soars. And it does so in a way that few other superhero films have. MANILA, Philippines – Spider-Man’s greatest enemy has always been himself. Despite Spider-Man’s nefarious roster of villains, his underlying tension has always been between his life as Peter Parker and his responsibilities as New York’s web-slinging protector. It is this delicate balance between ordinary teenager and extraordinary superhero that has come to define both his comic book identity and his persona as one of history’s most recognizable superheroes.

While that theme plays a prominent role in The Amazing Spider-Man 2, it often stumbles on its way there, sidelined by a need to placate a superhero hungry audience and cram as much Spider-Man in the film’s two-and-a-half-hour running time. (READ: ‘Hipster’ Harry Osborn and what you didn’t know about ‘Spider-Man 2’)

This time around, Peter Parker (Andrew Garfield) is haunted by the death of police captain George Stacy (Denis Leary), the father of his now-girlfriend, Gwen Stacy (Emma Stone). After vowing to exclude Gwen from his life to protect her, Peter breaks his promise when he risks his responsibilities as Spiderman for his feelings for Gwen. But when Peter’s best friend Harry Osborn (Dane DeHaan) takes over his father’s company OsCorp, Peter finds himself at odds with Harry and a new super powered villain by the name of Electro (Jaime Foxx).

Peter’s relationship with Gwen is the obvious core of The Amazing Spider-Man 2. Unfortunately, the story is marred by so many contrivances, inconsistencies and petty meanderings that even a film enlivened with such capable actors just isn’t enough to keep the film from bursting at the seams. But while the film does suffer from its fair share of lows, its handful of highs still provide some of the best Spider-Man moments yet to be captured on the big screen.

Too much of a good thing

The film is a return to the web-slinger’s pulp comic roots. While other superhero movies have made a point to nail themselves to the guise of pretention and self-importance, Spider-Man isn’t too quick to damn himself into seriousness. Peter Parker is as charmingly clever as ever, keeping the wit and humor of the comic run largely intact.

Spiderman glides from one action scene to the next with a handful of juvenile puns in his back pocket. But while Andrew Garfield does succeed at being a crowd-pleaser, the film ends up slipping due to a heavy serving of mistimed melodrama. In one scene, Spidey is serving spirited punchlines by the fistful, and in the next he is dishing out entrees salted with his own tears. The result feels fairly uneven, if not wholly inconsistent.

But all of this is symptomatic to the film’s larger problem: gluttony.

The Amazing Spider-Man 2 tries desperately to serve a buffet of Spiderman storylines all in an effort to kick off a comic book universe centered on the web sligning crusader. There’s the secret of Parker’s parents, the return of Harry Osborn, the rise of the powermad Electro, not to mention Peter’s overly complicated relationship with Gwen. As interesting as these bits all are, the film’s inability to focus on any of them leaves most of them undercooked and underdeveloped.

Director Marc Webb does a commendable job of keeping the story mostly coherent, but even his more than capable actors are hard-pressed to keep the scenes moving when they are weighed down by indulgent amounts of exposition and backstory.

The film is a smorgasbord of all things Spider-Man. And while hawk-eyed comic geeks will definitely revel in the ocean of comic references, it’s not hard to question whether all of it is necessary. It’s particularly disappointing because all these convoluted and overly complicated storylines all distract from the heart of the film, Peter Parker and Gwen Stacy.

Andrew Garfield and Emma Stone convey an undeniable amount of electricity, and it shows in every scene between Peter and Gwen. While it does help that Garfield and Stone are real life beaus, their natural talent as actors does well to bring their characters to life and gloss over the many inherent problems of the script.

This all comes to a head in the film’s gutpunch of a climax. While the ending of The Amazing Spider-Man 2 should come as no surprise for comic fans, Webb does a spectacular job of cutting through the chaos and providing an overwhelming amount of heart.

“I’d like to think that Spider-Man gives people hope,” Peter tells Gwen. While that may sound like a crude attempt at self-congratulation, it’s that precise moment that Peter sees Spider-Man as someone outside of himself. But all that comes crashing down when Peter’s private life unavoidably gets tangled in his alternate one.

Despite all of the film’s slips and dips, when it flies, it soars. And it does so in a way that few other superhero films have. 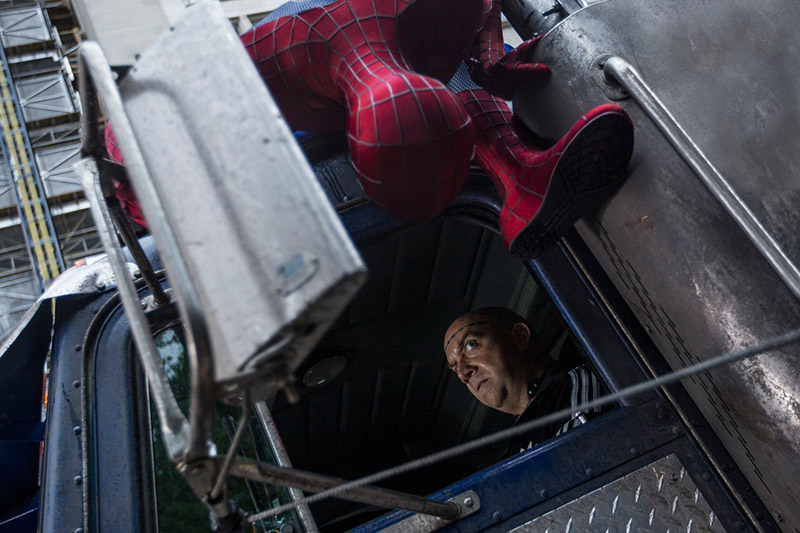 In today’s post-Avengers Hollywood, studios are scrambling to create universes out of what few franchises they have. In the case of Sony, the studio is already dead set at milking the Spider-Man franchise with an army of films based around many of Spider-Man’s infamous villains. It’s an odd but understandable concept that runs the risk of drowning Spider-Man brand in the process.

As superhero films become more ambitious, both in their set pieces and in their stories, it’s hard not to see each new movie as a business move. A season’s worth of television is literally crammed into two-and-a-half hours of cinema, and it’s all in an effort to fuel the next sequel, and create hype for the next movie.

Like Spider-Man, the film’s greatest enemy is itself. Its relentless need to offer too much and to pander to too many consequently robs the end product of a lasting place among one of the best superhero films in history. While that may sound like a heap of praise for an ultimately flawed film, that’s because a superhero as great as Spider-Man deserves no less. – Rappler.com