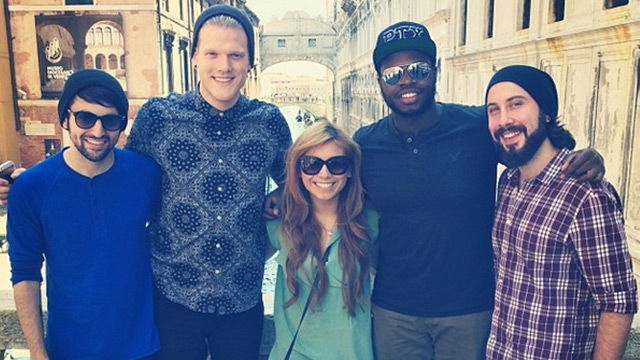 The group will play rivals to the Barden Bellas, headed up by returning cast members Anna Kendrick and Rebel Wilson, and the rest of the gang.

Pentatonix won season 3 of talent competition The Sing-Off, and shot to fame thanks to their unique, precise vocals, which often appear to mimic musical instruments closely. Members Scott Hoying, Mitch Grassi, Kirstie Maldonado, Avi Kaplan and Kevin Olusola have since enjoyed mainstream success, including best-selling albums and sold-out concerts. They also have written their own original music.

One of their most viewed videos, a medley of song by Daft Punk, has over 77.8 million views on YouTube.

Their “Evolution of Music,” another popular video, features snippets of music covering tunes from the 11th century to the jazzy tunes of the ‘40s, to the swingy beats of the ‘50s, to the contemporary songs of today.

The members of the group have confirmed to Entertainment Weekly that though they’ll be playing an a cappella group, they won’t be playing themselves.

Hoying also told EW that they arranged their own song in order to retain the group’s spirit. “They gave us a song, and we arranged it and sent it back, expecting them to say, ‘You need to change this, this, and this.’ But they came back and said, ‘Great, that’s it!’ That was really cool,” he said.

Pitch Perfect, released in 2012, was set in the world of competitive collegiate a cappella. In the movie, freshman Beca (Kendrick) reluctantly joins the group after being recruited by zany Chloe (Brittany Snow). The Barden Bellas learn to change it up and break away from tradition when their tried-and-tested routines fail to make the cut, especially against the rival all-boys group, The Treblemakers.

Here’s a scene from the first movie:

Most of the cast members from the first movie will be returning, including Brittany Snow, Skylar Astin, Adam DeVine, Rebel Wilson, and Anna Camp. Oscar nominee Hailee Steinfeld will be joining the cast.

Elizabeth Banks, who produced and starred in the first film, will direct; 30 Rock writer Kay Cannon will return to write Pitch Perfect 2. – Rappler.com