Jul 6, 2014 10:00 AM PHT
Oggs Cruz
Facebook Twitter Copy URL
Copied
'What Diaz has done is to distill centuries of the country’s sorrows and agonies into a fascinatingly fractured narrative that will never ever leave you,' writes movie reviewer Oggs Cruz 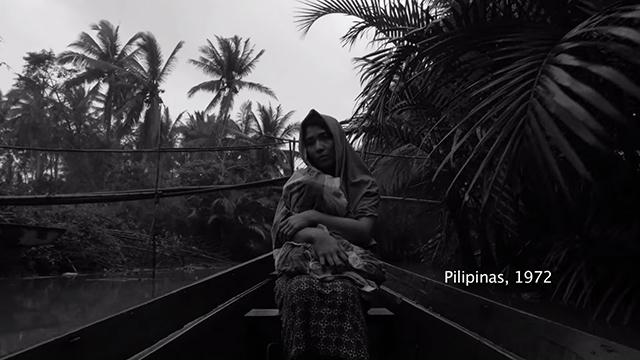 Mula sa Kung Ano ang Noon (From What is Before), Lav Diaz’s follow-up to his highly acclaimed Norte: Hangganan ng Kasaysayan (Norte: The End of History), opens with views of rolling hills and untouched landscapes.

From a forest of bananas, a little boy (Reynan Abcede), carrying a large bunch of bananas, walks towards the field. A voice, presumably of the invisible storyteller, breaks the peace established by the stretched minutes of Diaz’s monochrome vistas, saying that everything is but based on memory.

Memory, like history, is a malleable commodity in Diaz’s films. The memory spoken by the invisible storyteller is not the same memory that we commonly understand. In fact, the invisible storyteller may not even be the little boy, or Diaz himself, but of the film’s most prominent character, the town. Diaz has crafted a community, much like the Philippines, that aches and bleeds because of the acts and decisions of the people that comprise it.

Mula sa Kung Ano ang Noon works best as an allegory. The events that happen in the small town, although specified as though they have happened a couple of years prior to the events of the martial law era, mirror the vast history of the Philippines as a nation. From the pertinent connection of the people with the land to that connection’s slow but sure dissipation because of the subtle entry of religion and politics, the town’s harrowing experiences evoke a certain sense of familiarity that is discomforting.

Diaz, however, does not settle for just symbolisms and representations. The stories of the town’s dwellers are by themselves worthy of their own multi-hour features. The little boy from the film’s opening, believing all his life that his parents are lepers in a colony in Palawan, has been saving money to search for them. Sito (Perry Dizon), the boy’s ward and concocter of the grand lie, acts as the film’s central figure, the only person to completely witness the village’s transformation.

Itang (Hazel Orencio) and Joselina, her sister who suffers from cerebral palsy and has the power to heal some of the villagers’ many ailments, provide the film its moral dilemma. Through the rumors spread by Heding (Mailes Kanapi), the outsider who has suddenly started to sell various knick-knacks to the villagers, the sisters have become the center of suspicion as to why the town has been suffering. Tony (Roeder Camanag), the town’s winemaker, surreptitiously visits Joselina to ease his carnal longings.

The town, although far from perfect especially with its many tales of suffering and deceit, reflects the very same dilemma that plagues the Philippines. Diaz, by weaving together those tales into a single epic, has summarized a country’s painful history not with facts and dates but with impressions and emotions. Mula Sa Kung Saan Ang Noon is sustained by evocative tableaus of human beings in various degrees of personal, spiritual and political strife.

This country is built on the sins of its citizens, Diaz seems to be proclaiming with Mula Sa Kung Saan Ang Noon. Its history is carved from the lies, the duplicity, the greed, and the violence that have been constant tools for survival. Projected away from the film’s narrative and into what the country has actually experienced, it is the Philippines’ history of repeated exploitation that has allowed for certain evils to triumph. Marcos, and everything that has happened thereafter, are but products of our own inhumanity and complacency.

Mula sa Kung Saan Ang Noon, which deservedly won the grand prize in the ongoing World Premieres Film Festival by the Film Development Council of the Philippines,is five and a half hours long. It is short compared to Diaz’s other eight to eleven hour masterpieces. Let this not daunt you. What Diaz has done is to distill centuries of the country’s sorrows and agonies into a fascinatingly fractured narrative that will never ever leave you. This is a memory that is worth making your own. – Rappler.com