‘Guardians of the Galaxy’ Review: Fantastic trip to Neverland

Aug 2, 2014 9:00 AM PHT
Zig Marasigan
Facebook Twitter Copy URL
Copied
There's plenty to like for fans and casual viewers alike in this film based on one of Marvel's lesser known properties
Superheroes apparently grow up when they go to Hollywood. For box office superstars like Batman, Iron Man, Superman and Spiderman, it’s like they all hit puberty and decided to start paying taxes. For most of them, they’ve shed the camp humor and cartoon charm. 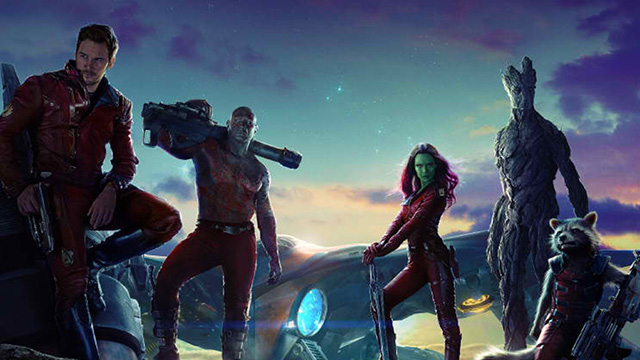 It’s afforded the genre some much-needed credibility, but while every other superhero film is desperate to be considered “serious cinema,” Guardians of the Galaxy doesn’t bother.

Set in the far reaches of space, Guardians of the Galaxy is based on Marvel’s admittedly obscure comic line of the same name. As if the idea of Norse gods and high tech robot suits weren’t unbelievable enough, Marvel Studio decides to take a gamble on one of their strangest properties yet.

A young Peter Quill (Chris Pratt) is abducted from his family by a mysterious alien spaceship. Twenty five years later, he’s become a Ravager, part of a rag tag group of interstellar thieves and smugglers who scour the universe for loot and booty.

But when Peter steals a mysterious metal orb in hopes of a big payday, he ends up becoming the target of Ronan (Lee Pace), a vindictive alien hell bent on unlocking the mysterious properties of the orb. Peter is a marked man, but when he teams up with the tough-skinned assassin Gamora (Zoe Saldana), the sharpshooting raccoon Rocket (Bradley Cooper), the sentient eight-feet tree Groot (Vin Diesel), and the blade-wielding Draxx (Dave Bautista), they all end up on a wild, action-packed and hilarious romp to save the galaxy.

Guardians of the Galaxy is very much like a child’s play pen, a smorgasbord of toys and trinkets that have no business being together. But as with any child’s imagination, talking trees and a gun-toting raccoon are all par for the course. This is a universe where cities are built inside the heads of celestial beings, and where astronaut dogs are no stranger than world-destroying gems.

But this is a universe that isn’t steeped on pretentious notions, nor is it weighed down by logic. This is a film from a child’s imagination. And if the Guardians anything to say about it, they are never growing up. 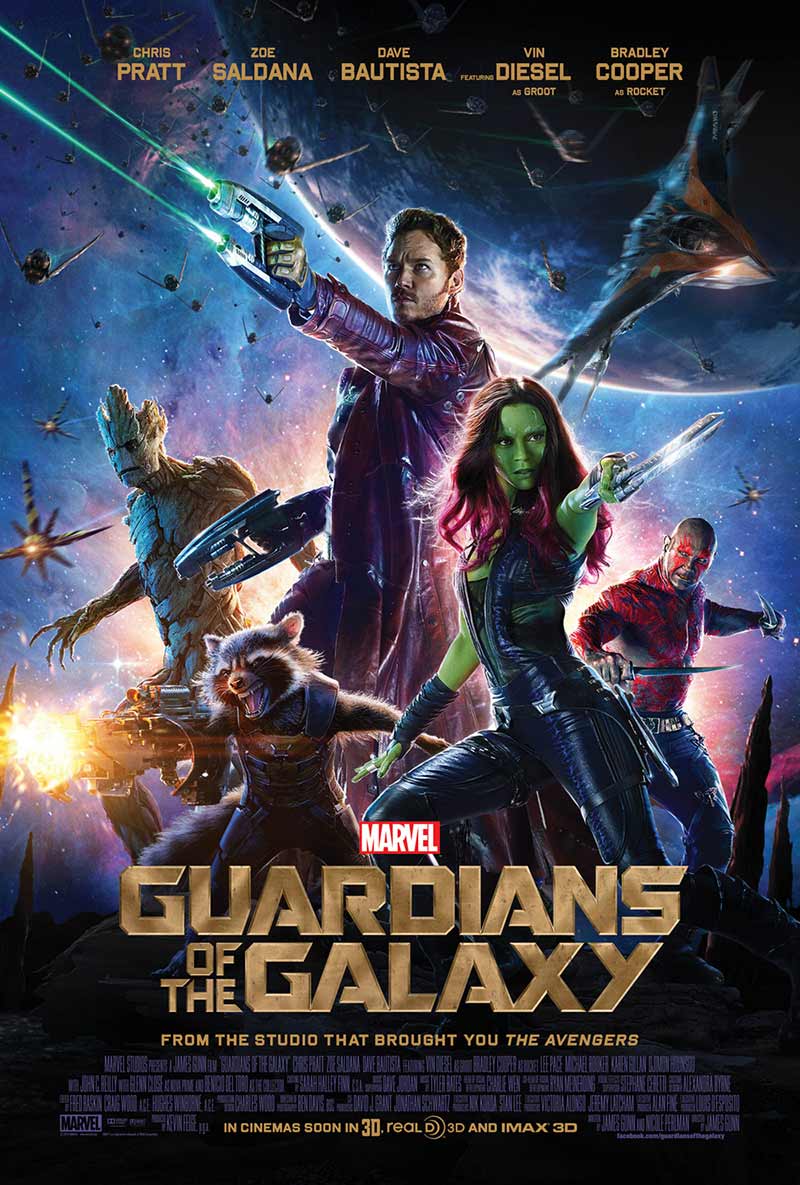 Marvel Studios has always injected levity into their films, but Guardians of the Galaxy takes that fondness to a whole other level thanks to the guiding and irreverent hands of director James Gunn.

Unlike other superhero films, Guardians of the Galaxy does away with a lot of the origin story fluff, and keep things tight and running at a near dizzying pace.

While The Avengers took a laborious (though satisfying) five films to assemble, Guardians of the Galaxy gets everyone in check by the very first hour. And just when things are about to tip over into heavy-handed seriousness, it always comes back to comedy territory.

When Rocket demands Peter for a reason to save the galaxy, Peter only snaps back at him saying, “Because I’m one of the idiots who live there!”

The story of Guardians of the Galaxy is admittedly convoluted and often confusing. It’s easy to get lost in the sheer number of outlandish things, places and characters that need to be set up. And while the story is held up astoundingly well through Gunn’s direction, there’s no getting around that the script is far from perfect. But that never gets in the way of the heart of the film: the five Guardians.

Chris Pratt may not be a household name, but like most of Marvel stars, that’ll quickly change when Guardians of the Galaxy takes the near-certain crown at the box-office. His performance as the loose-tongued, fast shooting Peter Quill, a.k.a Star-Lord, is undeniably magnetic and exceptionally charming. 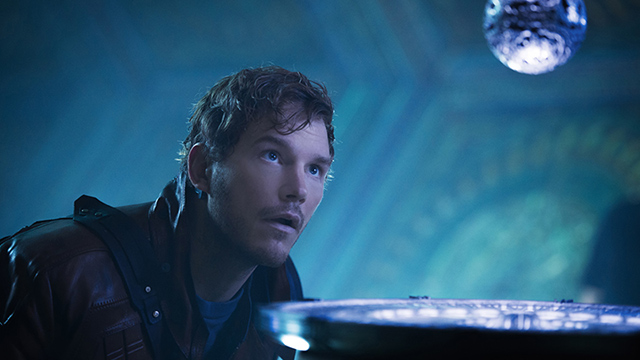 It’s a cross between Han Solo and Mal Reynolds that readily earns Star-Lord a place in the growing pantheon of lovable science-fiction rogues.

But the stand-out performance here goes to Bradley Cooper whose trash-talking space raccoon Rocket ends up with one of the film’s most brilliant scenes. It’s a moment that comes right out of nowhere, but reveals just enough to prove that underneath each of these alien-skinned Guardians is a character worth following for many years to come. 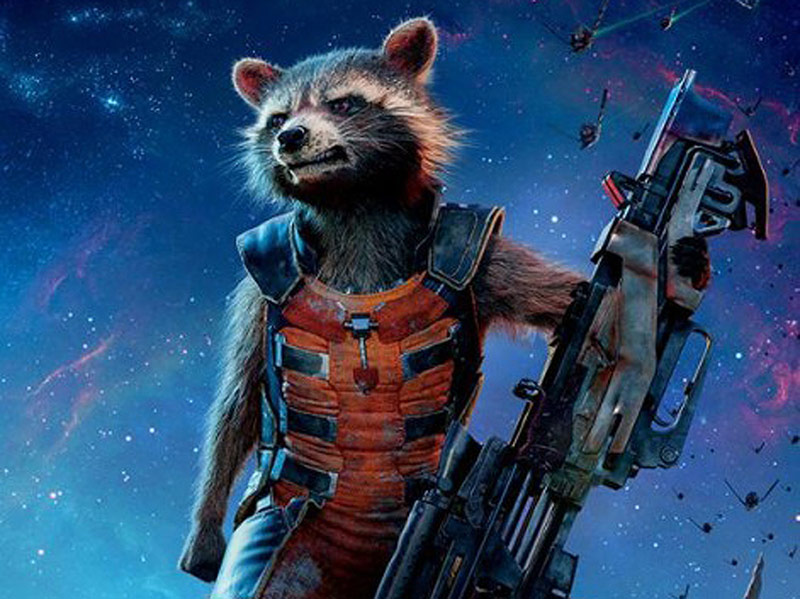 Guardians of the Galaxy is peppered with a delicious serving of humor, wit and action, while still being packed with a tremendous amount of heart.

While superhero films are hurrying to grow up, Guardians of the Galaxy is a reminder that we shouldn’t. It throws us back into that play pen and shows us that our toys have no rules, animals can talk and our worlds are infinite.

Although Peter Quill doesn’t end up the same selfish rogue he was at the beginning of the film, he’s still that same young boy who was kidnapped from his home 25 years ago.

Guardians of the Galaxy could very well be our modern day Lost Boys, with Peter Quill their revered Peter Pan. The film is a wildly fun and satisfying punch to the gut that serves as a reminder that comics are for kids, and that’s not a bad thing.

Guardians of the Galaxy is a trip to Neverland that transports its audience to a place of childlike wonder and pre-adolescent ridiculousness.

And for the sake of the millions of your newfound fans: never grow up, Peter Quill. Never grow up. – Rappler.com