WATCH: ‘Rurouni Kenshin’ stars on the making of ‘Kyoto Inferno’ Facebook Twitter Copy URL
Copied
Rappler talks to actors Takeru Satoh, Munetaka Aoki, and 'Kenshin' director Keishi Otomo about the inner workings of the characters and their translation from anime to big screen
MANILA, Philippines – A deep and lasting attachment to the characters, incredible attention to detail, and great respect for the material.

These were the overall themes that became apparent during Rappler’s interview with Rurouni Kenshin director Keishi Otomo, and lead actors Takeru Satoh (who plays Kenshin Himura) and Munetaka Aoki (who plays Sanosuke Sagara).

Takeru and Munetaka both said that they loved their respective characters, and internalizing their stories, understanding the way they thought, their histories, were critical.

“So the more and more I imagine about him, I realize what a sad life he’s had, what a great guy he really is – so all these things that just come up in my heart, and I can’t help but really cheer for him, empathize with him. And that’s how I ended up portraying who he is through me,” said Takeru of Kenshin, speaking in Japanese.

In the movie, based on the original manga by Nobuhiro Watsuki, Kenshin is a killer-turned-wanderer committed to his vow of non-violence. In the first Rurouni Kenshin live action movie (2012), he meets and befriends the feisty, sweet Kaoru Kamiya (played by Emi Takei), Yahiko Myojin, and Megumi Takani, and finds a friend and powerful ally in the jolly, wild, and fiercely loyal Sanosuke Sagara.

In the two-part sequel, set for August and September release dates in the Philippines, Kenshin faces off against Makoto Shishio, a bloodthirsty villain who picked up where Kenshin left off after Kenshin decided to stop killing. Kenshin must stop Shishio – but at what cost? 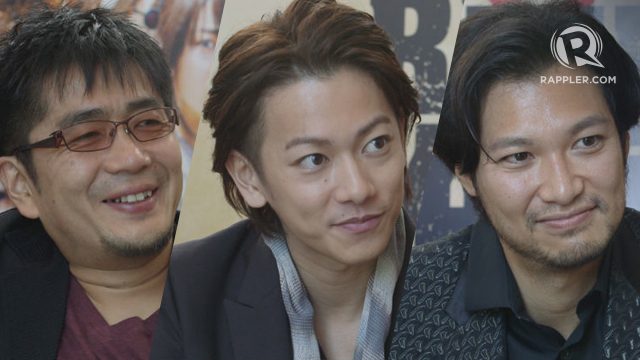 Munetaka says that there were parts of Sanosuke’s character that he studied well, particularly when it comes to the action scenes.

“So it’s very interesting that slowly, slowly, as I go through the character, it started to have its own skin and bones, and flesh, and slowly it becomes the actual character. It was a very interesting process,” he said in Japanese.

But there were parts that he did not overthink. When asked how he studied Sano’s facial expressions and how he prepared for that, this was his answer:

“I myself watched the finished movie and then I realized that I had those expressions!”

In English, Munetaka said earnestly: “I love this character, so much.”

Many insights about the film came courtesy of director Keishi Otomo, who stressed the focus on Kenshin and Shishio in both parts of the sequel. When it comes to the changes in the characters that you might have seen in the anime, he said that it was still important for him to be able to draw out the heart of the story.

“So with so many characters, actual characters that the Kenshin character has, it’s really difficult to be able to define or portray each and every character, all of them appear in the movie, which is why we had to make some creative license,” he said in Japanese.

The short interview with Rappler was one of several activities lined up for the Japanese visitors in their short 2-day visit to Manila.

On day 1, Munetaka Aoki, Takeru Satoh, and Keishi Otomo were joined by Emi Takei, who plays Kaoru in the film, for the movie’s Asian premiere at SM Megamall. Watch their red carpet interviews with Rappler here.

On day 2, they were named cultural friendship ambassadors by the Makati City Council, and also viewed a Rurouni Kenshin-themed jeepney.

Following media interviews, including this one with Rappler, the stars (without Emi Takei) greeted fans at a public press conference at Glorietta Activity Center. Watch the entire question and answer portion here.