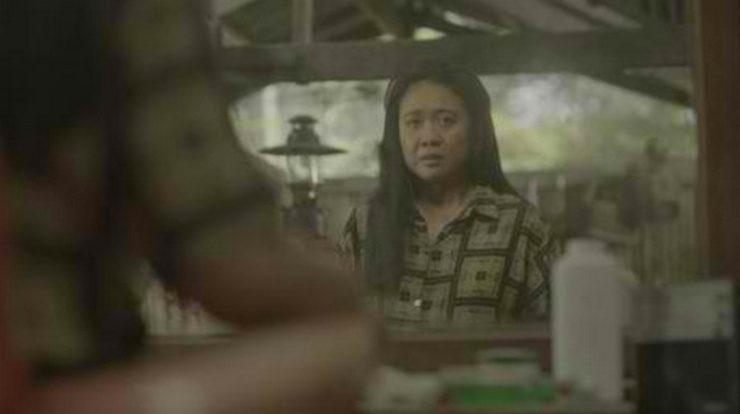 Facebook Twitter Copy URL
Copied
'Barber’s Tales' is a pensive tale of the self-discovery of a voiceless woman as propelled by personal crisis, in an age of political upheaval

“For most of history, Anonymous was a woman.”

The quote, attributed to writer Virginia Woolf, finds relevance in the first few minutes of Jun Lana’s Barber’s Tales. Marilou (an exquisitely subdued Eugene Domingo) is often seen in the background doing various chores while her husband (Daniel Fernando), the town’s only barber, goes about his business grooming his customers.

Marilou is quiet, taciturn, and unsure. She is an effigy of that familiar woman left suffering in the sidelines.

It is only upon her husband’s sudden passing that Marilou comes to the forefront. Her journey towards emancipation is slow and deliberate, starting with her hesitant exercise of the haircutting techniques she learned from her husband on her town’s parish priest (Eddie Garcia) and ending with her assured proclamation of her place in a society dominated by men.

Barber’s Tales is a pensive tale of the self-discovery of a voiceless woman as propelled by personal crisis, in an age of political upheaval.

The second part of Lana’s trilogy of films set in rural towns (2012’s Bwakaw, about a gay man who falls in love at the twilight of his life with the most unlikely man in town, being the first in the trilogy), Barber’s Tales is dedicated to Marilou Diaz-Abaya, whose films like Moral (1982) and Karnal (1983) represented women outside the typical depictions in most Filipino films.  (READ: Eugene Domingo’s ‘Barber’s Tales’ is audience favorite in Italian festival)

Lana, like Diaz-Abaya, incorporates other female roles into the fold, such as the prostitute (played beautifully by Sue Prado), the oft-pregnant best friend (Gladys Reyes), the doting old maid (Shamaine Centenera), the battered wife (played with such wayward fragility by Iza Calzado) of the philandering politico (a devious Nonie Buencamino), into his film only to break and twist them to suit his message.

Thankfully, Lana forgoes defining female empowerment as the incorporation of commonly conceived male traits by female characters. To do so would only be a case of missing the point and celebrating the wrong things.

Instead, Barber’s Tales has its main character maintaining her femininity, and allowing herself to be volatile to her emotions, whether it be guilt or anger. Marilou needs only to be liberated from the shadows of her husband to begin fully recovering everything she lost from being repressed.

Freedom is the theme here, not transformation. This is precisely why Barber’s Tales is set in a decade that is defined by government-sponsored repression. The seeming normalcy of life is just a veil that hides a system-inflicted suffocation, as shown by the various killings and disappearances of people thought of as enemies of the state. The nation is under the clutches of Marcos’ vengeful regime.

Lana plots Marilou’s escape from the clutches of traditional machismo alongside a country’s struggle for revolution. In Barber’s Tales, feminism is both a personal and social concept. Marilou struggles for an identity despite the male dominance the same way some revolutionaries struggle for freedom despite Marcos’ tight grip. The personal and social concepts merge, with Marilou committing one surprising act that signifies both her assertion of her power as a woman and her oneness with all the other rebels.

Lana tells his story with a courageous restraint. The music composed by Ryan Cayabyab is used sparsely, purposely during scenes that require emotional layers that are beyond what Carlo Mendoza’s precise framing and lighting may provide.

Its rhythm is gradual and measured, never rushing only for the sake of plot. The film is peppered with humor, which seems to poke fun at how men, who are depicted in the film as either weak or needy, are subservient to women despite their control.

Barber’s Tales ends with Marilou proclaiming herself with her new name. This is the first time she refers to herself, as she has never called herself anything, not even a barber, or the wife of a barber. The film’s single final line justifies her journey. She emerges as an independent person, capable of giving herself an identity that is not reliant on the men of her life. Marilou is no longer anonymous. – Rappler.com