‘The Giver’ Review: Thank you for your childhood Facebook Twitter Copy URL
Copied
'The real problem with 'The Giver' isn’t that it’s unfaithful to the book, but that it fails to do anything interesting with it,' writes movie reviewer Zig Marasigan
Young adult novels have been making quite an impression at the Hollywood box-office. And despite the relative age of its source material, The Giver wants in on the action.

Based on the Lois Lowry novel of the same name, The Giver is set in the supposedly distant future where humanity has been relegated to tightly controlled communities.

Citizens are assigned specific roles, and a mandatory drug robs everyone of any real emotion. It’s all in the name of control, or in the words of The Giver, “sameness.”

No one has any real memory of what came before that, but when Jonas (Brenton Thwaites) is assigned to become the Receiver of Memory, he learns that the world is a much richer and much more frightening place than he imagined.

Unfortunately, the only thing frightening about the film is how irreverently far it is from the original novel.

Although the now celebrated book predates a lot of today’s young adult science fiction, The Giver feels ironically derivative of what’s been showing in theaters over the past two years. A dystopian society, a reluctant young prodigy, and a sudden need to overthrow the system, all point towards films that have done it all before, and also, have done it all recently.

The Hunger Games and Divergent may have very well taken their cues from The Giver, but after so many years in gestation, the complete opposite seems true. But despite its inherent problems with timing, The Giver is still as readable today as it was more than 20 years ago. Its story still brims with the same lush insight as it did when it was first published, and continues to be relevant reading for both young and older audiences.

But for a story about identity, passion and humanity, The Giver is devoid of any of those key elements. And for a film that banks heavily on childhood nostalgia, it does the despicable job of ruining it.

The film makes considerable changes to its source material; key memories and characters have all been adjusted to fit the cinematic world of The Giver. Jonas still finds guidance in The Giver himself (Jeff Bridges), but now Jonas’ most formidable adversary is the community’s Chief Elder (Meryl Streep).

While there’s an understandable need to make a lot of the book’s more abstract elements more tangible, the changes seem more motivated by form than function. What should’ve been a nuanced exploration of emotion and memory is suddenly boxed into a Hollywood run for the young adult market.

But the real problem with The Giver isn’t that it’s unfaithful to the book, but that it fails to do anything interesting with it. For a novel as brief as The Giver (the paperback is less than 180 pages long), the film fails to seize the opportunity to expand on the book’s most pertinent themes. 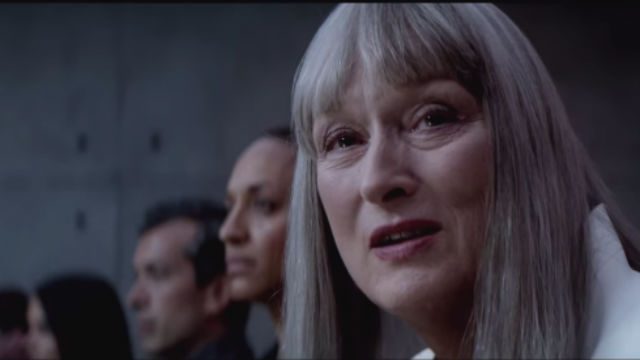 Instead, like the elders of the community, The Giver is content with sticking to what’s safe, conservative and formulaic. Meryl Streep is the unconscionable villain and Brenton Thwaites is the world’s shining hero. There is no middle ground and no room for discourse, even when the film’s story desperately begs for one.

The only time The Giver hits any real emotion is when the film cuts to raw footage of the world’s memories. Video clips of childbirth, disease, death, war, triumph and revolution, surge into Jonas’ memory, and suddenly, we are bathed in our own history, the history of humanity.

Suddenly, we aren’t watching manufactured scenes from a Hollywood set. We are witnesses to the collective memories of humanity. It’s the film’s inability to sustain that rush of emotion that cuts itself right at the knees.

Jonas’ most sincere connection is made with his friend Fiona (Odeya Rush), but even that relationship feels more like a check box in a list of young adult prerequisites.

The film speaks highly about the importance of experience and emotion, but fails to deliver on either of them in a way that feels fresh, innovative and inspired. Sadly, the story ends up as cold as the community it tries to rebel against.

But of the many glaring revisions to the text, it is the film’s ending that’s bound to rub fans the wrong way. While the original novel opted for a more ambiguous conclusion, the adaption aims for something more cut and dry.

Although fans will most likely be up in arms about such a blatant change to the text, the problems with The Giver are much more fundamental. The themes and characters of the original novel exist in name only, but the lack of richness and depth keep them from resonating past the screen.

It’s easy to make the case that books will always be superior to their film counterparts. But with regards to The Giver, the film’s surprisingly short running time (a little more than an hour and a half), shows that the filmmakers had no real intention of expanding on what they had.

Despite being aimed squarely at theyoung adult market, The Giver will most certainly attract older viewers who’ve had the opportunity to read the book back in school. It’s an obvious play at evoking childhood nostalgia.

In both the book and the film, Jonas and his peers are thanked by the community for their childhood. It’s a symbol of polite congratulations for crossing the threshold from child to adult. But for fans of the book, it’s a sarcastic punchline. They’ve simply taken our childhood and run away with it, without making any real effort at earning it. – Rappler.com