Mark Gil and his many roles, from neophyte to benefactor 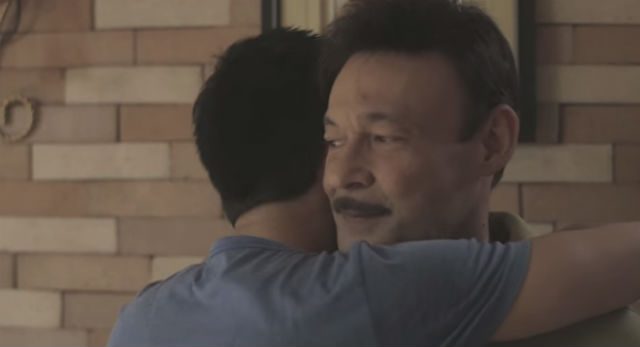 Raphael John Eigenmann, the son of Eddie Mesa, often referred to as the Elvis Presley of the Philippines, and legendary actress Rosemarie Gil, was born on September 25, 1962.

His fated entry to the entertainment industry, an industry marked by its reliance on lineages and convenience, forced him to adopt the name Mark Gil, a shorter and catchier name that would immediately link the then fledgling actor to the popularity and esteem of his mother.

In his earlier films, he evoked the irresistible charm of a young man privileged by mestizo good looks and hardened swagger. This facet, which Gil naturally possessed and wisely utilized to the fullest extent, got him roles which were beyond those given to traditional matinee idols.

In Gil Portes’ Miss X (1980), about a Filipino prostitute working in the red light district of Amsterdam, Gil was cast as the leading man to Vilma Santos, who at that time was already regarded as one of the Philippines’ best actresses. He ably fulfilled Portes’ requirements, churning out a performance that exemplified the grit that the material called for. Mark Gil however will forever be remembered as Sid Lucero in Mike de Leon’s Batch ’81 (1982). The film, which was produced in reaction to a fraternity incident that the son of the film’s funder experienced, accurately depicted the absurd punishments college students willingly go through just to be admitted into Greek-letter fraternities. There was definitely some ingenuity in casting Gil, who has become that generation’s poster boy because of his various roles that challenged the ideal perception of what the youth should be, as the tough neophyte of the Alpha Kappa Omega fraternity.

The pain, the embarrassment, the shame felt more real with Gil. His eventual descent to being a pawn beneath the forced ideals of the fraternity resonated so much more.

Gil would be nominated for an Urian for his iconic performance in Batch ’81. However, it would be his collaboration with Lino Brocka in Palipat-lipat, Papalit-palit (1982) that would grant him his first trophy as Best Supporting Actor from the critic’s group.

In the film, Gil portrayed a gay man whom a married woman, played by Dina Bonnevie, spends much of her time with after separating with her husband, played by Christopher de Leon.

He would also get nominated for his performances in Peque Gallaga and Lore Reyes’ Kid, Huwag Kang Susuko (1987), Chito Roño’s Narito ang Puso Ko (1992) and Gil Portes’ Saranggola (1999) by the FAMAS, among others.

Yet Gil’s career was not defined by the various accolades he garnered. He is that rare actor whose greatness did not need medals and trophies. He earned respect and veneration because each of his performances, whether it be in a masterpiece by a respected filmmaker or just one run-of-the-mill caper, is something that would add value to the film.

Gil, notwithstanding his status as one of the country’s best actors, always lent his talent whenever and wherever it is needed. It is perhaps this trait that made him an indispensible part of the ushering of independent films in the country. As early as Magnifico in 2003, he already established his presence as a capable actor whose love for the craft outweighed everything else.

Gil gave several of his best performances during this period of his career. Independent films became his outlet away from the deadening routine of telenovelas and mainstream work, where he would always play standard supporting roles.

In the hands of ambitious young directors, Gil was transported back to the era of Ishmael Bernal and Mike de Leon and their challenging and three dimensional characters.

In Ron Bryant’s Rotonda (2006), Gil inhabited the role of a troubled tabloid writer on the verge of committing suicide. He would win his second Urian trophy for the performance.

He would work again with Bryant in Alon (2008), where he played an old man who is torn between his cancer-stricken wife and a younger woman he meets at the beach.

In Lawrence Fajardo’s Amok (2011), Gil played a desperate fading action star who becomes one of the links to a violent incident in one of the busiest intersections in the metropolis.

It is an indubitably brilliant performance, one wherein the actor seamlessly matches the rhythm and energy of the film. Gil seemed to understand Fajardo’s creative impulses since he gave a more acute performance in 2006’s Raket ni Nanay, a film that requires a lot more subtlety to work.

Gil had the gift of molding himself to suit his directors’ visions. For Richard Somes in Ishmael (2010), Corazon: Ang Unang Aswang (2012) and Mariposa sa Hawla ng Gabi (2012), he transformed into bizarre monsters that aptly communicated the twisted realities Somes wanted to impart.

In Gabriel Fernandez’s Mana, he morphed into an esteemed family’s pathetic black sheep, becoming an indispensible part of the fractured Ilonggo clan that Fernandez wanted to show.

Arguably, Gil’s final great work is in Benji Garcia’s Philippino Story. In the film, Gil played the gay benefactor to a poor but good-natured callboy, played by Jun-jun Quintana. The success of Garcia’s film hinged on Gil’s performance, since a two-dimensional performance can tilt the balance the film requires, turning it into just another one of those films depicting predatory homosexual relationships.

Fortunately, Gil understood the delicacy of Garcia’s vision, and turned his character into one whose dilemmas and heartbreaks are easily understandable.

Moreover, Gil’s performance complemented that of Quintana, whose quiet innocence despite the harshness of the world he was born into is beautiful.

Interestingly, there was never a tinge of selfishness in Gil’s work here. He allowed Quintana to shine, and shine he did, eventually winning a Best Actor trophy from the Urian that year.

If there is one thing that Mark Gil should be remembered for, it is his generosity. His career is marked by performances wherein he is required to work with others, whether it is a director with a distinctly unique vision or filmmaking style, or an ensemble of actors with varying ranges.

In all his works, it never appeared that he was occupying much of the limelight. He was simply not there for himself. He was there for the film.

Even Sid Lucero, the name that jumpstarted his career, he generously lent to his son, Timothy Eigenmann. Perhaps this is the reason why Mark Gil is such a great actor. He just had so much to give, but too little time to keep giving. (READ: Stars, colleagues express sadness over Mark Gil death on social media)

Even up to the end, he was preparing for projects, for various filmmakers, for himself. There were simply no boundaries, not even the pain he was suffering because of the illness he had kept a secret, when it comes to his craft. (READ: Mark Gil: A pro until the end)

Alas, all shows must come to an end. It is time to retire Mark Gil, and let Ralph Eigenmann, the man whose lifelong vocation reflected an astounding heart, rest and reap the rewards of a life well lived. – Rappler.com