Facebook Twitter Copy URL
Copied
No plot spoilers for 'Legend Ends' in this movie review. Reviewer Zig Marasigan says the film is a fitting end to the much-loved movie adaptation of the popular manga and anime

All good things must come to an end. For Kenshin Himura, it’s the conclusive battle between him and the menace, Makoto Shishio. But for the legion of fans of the Rurouni Kenshin trilogy, The Legend Ends represents an end to something far more personal.

The Rurouni Kenshin trilogy is cinematic adaptation done right. And while it is far from perfect, the film is the spirit of the original manga and anime brought to life.

For those who have grown up alongside Kenshin and his friends, The Legend Ends is the closest thing fans will get to a real life farewell. (WATCH: Rurouni Kenshin director on movie twists and turns)

As the final chapter in the live-action Rurouni Kenshin trilogy, The Legend Ends closes the story of Kenshin Himura (Takeru Satoh), a former samurai forced to take down his vengeful successor Makoto Shishio (Tatsuya Fujiwara).

Torn between his duty to his country and to himself, Kenshin’s life is made especially complicated following a vow never to take another person’s life. But when confronted with a nemesis who deserves nothing short of death, Kenshin’s vow becomes especially problematic. (READ: What Rurouni Kenshin characters think of their characters)

—— Mild spoilers from Kyoto Inferno below ——

The Legend Ends follows the events of the previous film, Kyoto Inferno, where Kenshin awakens following a confrontation with Shishio that ends with Kenshin jumping overboard into the sea. But when Kenshin is saved by his former mentor, Hiko Seijuro (Masaharu Fukuyama), Kenshin finds renewed purpose in his struggle against Shishio.

For a series steeped in both action and historical fiction, the Rurouni Kenshin trilogy stays firmly grounded because of its characters. (VIDEO: Watch Rappler’s spoiler-free 3-on-1 interview with Kenshin stars)

Despite their inherently cartoonish nature, there’s a resonating drive behind the characters of series creator Nobuhiro Watsuki. And though the film manages to mix a healthy amount of humor, action, and drama, it’s this fundamental drive that keeps the story surging forward.

A parade of characters

But The Legend Ends suffers from its own fair share of blemishes. The film showcases a wealth of familiar faces from the anime and the manga, but with so many characters on parade, not everyone is given the proper time to shine, particularly the Ten Swords.

Introduced in Kyoto Inferno, the Ten Swords were teased as eventual antagonists in Kenshin’s quest to vanquish Shishio. But while characters like the dapper fanatic Hoji Sadojima (Kenichi Takito) or the fallen monk Anji Yukyuzan (Tomomi Maruyama) are eventually given the temporary spotlight, others like the blind swordsman Uonuma Usui (Mitsu Murata) are relegated to mere cameo appearances.

Even Kenshin’s allies Kaoru Kamiya (Emi Takei) and Megumi Takani (Yu Aoi) are given very little to do throughout most of the film, although the refreshingly humorous Sanosuke Sagara (Munetaka Aoki) is given a rather satisfying fight scene towards the film’s latter half. But the film’s most notable entrance is that of Hiko Seijuro, master and mentor of Kenshin himself. Hiko’s introduction in Kyoto Inferno made for an effective cliffhanger, but his full blown participation in The Legend Ends becomes pivotal to Kenshin’s eventual showdown with Shishio.

Despite the number of new faces, The Legend Ends is far more focused compared to Kyoto Inferno. Loose ends are finally knotted away and Kenshin’s character is brought to a satisfying close.

Unfortunately, Kenshin’s nemesis Shishio is surprisingly absent throughout most of the film’s first half. And though the stakes are higher than ever, Shishio’s lack of presence robs the film of any real urgency.

With the film’s main villain missing from action, Kenshin is left to train with his master largely unchallenged, leaving the film hungry for some spark of friction. But whatever urgency is lacking in the film’s first half is more than made up for by the film’s second.

The Legend Ends brings closure to the trilogy in spectacular fashion. Nearly the entire second half is a single prolonged battle along the shores of Tokyo. But while the film teeters dangerously into drowning from too much of everything, The Legend Ends never runs out of steam as Kenshin and his allies make their way to Shishio’s fortress for the final showdown.

The film may be starved of action in its opening scenes, but it serves up a buffet table of delectable action sequences leading up to a blood-drenched, steel-cut climax. For a series centered around a pacifist warrior, the Rurounin Kenshin trilogy ends in fire and blood. 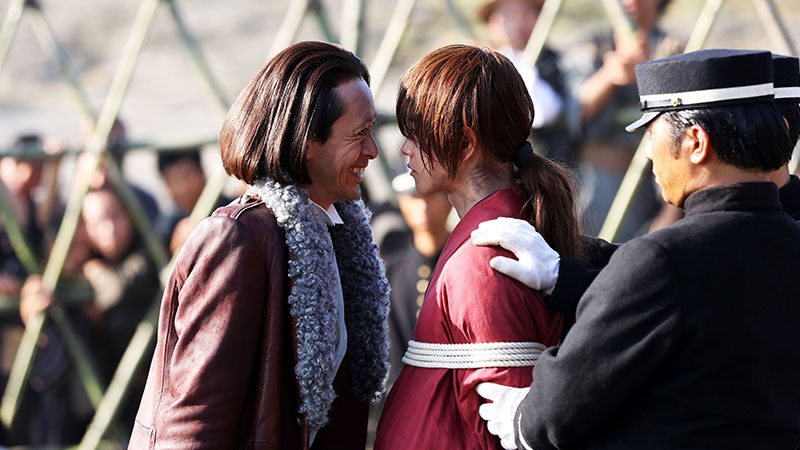 Worthy of the name

For director Keishi Otomo, the end of the Rurouni Kenshin trilogy marks a high point in his career. After a decade’s worth of television work, his transition into feature filmmaking has now been unquestionably solidified after bringing to life a trilogy as ambitious as Rurouni Kenshin.

But for fans of the series, the end of the trilogy is tinged with a bitter sweetness. The Legend Ends is an exemplary piece of work that is unabashedly targetted at fans of the franchise. But at the same time, it’s a series of films that doesn’t rely on the simple nostalgic hopes of its audience.

Keishi Otomo and the rest of his crew have managed to craft something special with the Rurouni Kenshin trilogy, and while it may not have lasting resonance among casual audiences, it does act as a satisfying farewell for die hard fans.

Despite the inevitable curtain call, the future of the franchise remains unwritten. And while it may be a good long while before the legendary Battosai picks up his iconic back-blade once again, fans can at least celebrate with a trilogy that is worthy of his name. – Rappler.com