‘The Trial’ Review: Original but melodramatic 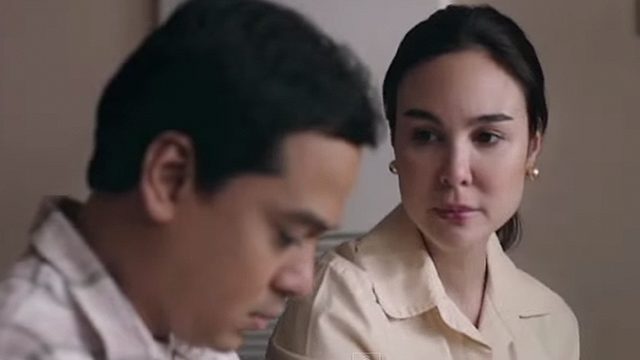 Facebook Twitter Copy URL
Copied
''The Trial' is admittedly held back when it follows convention, but it is ultimately liberated when it subverts them

Filipino family dramas have become a rare breed over recent years, a far cry from when films like Laurice Guillen’s Tanging Yaman and Rory B. Quintos’ Anak were a year-round staple. But when a genre is explicitly designed to collect tears from its audiences, it’s no surprise that moviegoers would much rather watch lighthearted family comedies starring Ai-Ai delas Alas, Vic Sotto, and Vice Ganda.

That’s why The Trial is such an odd beast. At a time when romantic and family comedies are playing jump ball with the box-office crown, Star Cinema and director Chito Roño make a surprising gamble on a film that’s neither one nor the other.

Ronald (John Lloyd Cruz), a mentally handicapped student, is accused of raping Bessy (Jessy Mendiola), his tutor and school teacher. And when the school files a case against Ronald in an effort to throw him in prison, Ronald’s family is given precious few options in matters of legal defense. But as a 29-year-old grade seven student, Ronald is a “special case” in more ways than one.

But when developmental psychologist, Amanda (Gretchen Barretto), discovers a connection between Ronald and her dead son Martin (Enrique Gil), she convinces her lawyer husband Julian (Richard Gomez) to take on Ronald’s case. And as Amanda, Julian, and Ronald try to mount a convincing defense, they discover soon that they’re all connected in more ways than just the case.

Make no mistake; The Trial isn’t a family drama by any conventional means. But it is a film about family. The Trial often falls head first into the pits of melodrama, but it does so with an unabashed desire to do so something new. And while the film does have the tendency to lose itself in the noise of histrionics, it does manage to deliver on a fresh spin to a genre that has long since passed its prime. Rape, mental disabilities, and court cases aren’t standard fare among Star Cinema films, and with good reason. When you’re aiming to delight and entertain the masses, there’s an immediate level of risk when the setting doesn’t inspire an exciting romantic climax or a novel comedic twist. But this is where The Trial tries to be something far more than cookie-cutter entertainment for the masses.

The Trial isn’t propelled by a young love team or a barrage of mile-per-minute punchlines. Instead, it’s driven by the story of Ronald, Amanda, and Julian. And though the performances swing from the poignant to the downright absurd, there’s an endearing complexity to each of the characters, even when the plot itself ends with an undeniable amount of predictability.

John Lloyd Cruz is at the epicenter of The Trial, and the film’s strongest pull in terms of outright star power. But it is the relationship between Gretchen Barretto and Richard Gomez that pushes the story forward. It is their corroding marriage, and their broken past that reveal the real heart of the film. And witticisms aside, it’s their marriage that’s on trial. The Trial frequently lapses in its desire to tell too many storylines at once, but for all the film’s ambitious attempts at originality, The Trial still falls prey to melodramatic convention. A deteriorating marriage, a dead son, and an emotionally distant mother are all familiar components in a drama that makes the common misstep of measuring its success on the amount of tears shed by its audience.

The film is so unabashed in its attempt to wring emotion that it often stacks not one, but two dramatic moments on top of one another. It is one emotional face off after another, and soon, the cast is in tears and the audience is exhausted.

And while the film is admittedly effective at pulling at proverbial heartstrings, it does miss the grander opportunity to make those heart strings sit, simmer, then burn. In fact, the film’s strongest moments and where the grandest gestures are smallest one, even if it’s something as simple as a young woman tucking her hand in her pocket.

But for all its flaws, The Trial is still a gamble. It never quite hits the high notes of popular romance and family comedies, but it does deliver on a story crafted with an indisputable desire to deliver something new.

At the end of the day, The Trial is a film about family. That is what’s most familiar, and that is what’s most important. While the film’s most prominent relationships may not be defined by blood, they are, in more ways than one, bound by it. The Trial is admittedly held back when it follows convention, but it is ultimately liberated when it subverts them.

The Trial may be a flawed revival of undoubtedly tired family dramas, but it’s a promising step towards seeing more films in the name of originality, regardless of genre. – Rappler.com