Facebook Twitter Copy URL
Copied
'There is some maturity to the two leads’ performances that proves that there is an actual reason for their extreme popularity,' writes Oggs Cruz

This is typical to the film’s genre. As soon as the leads establish passionate rapport with each other, a montage is called for, usually accompanied by a pop song that would have the audience reminiscing on their own romantic escapades. It is undoubtedly lazy, since it basically fast-forwards the narrative by relying on quick tricks to establish the essence of falling in love.

In all these types of films, the most pertinent question that needs to be answered is whether everything that led to that conveniently staged montage was worth the shortcut. Surprisingly, Crazy Beautiful You earns the cheat. By the time Mickey Thomas and Grace Slick start warbling their famous duet, sparks have been generated, leading only to a fire of juvenile romance.

The film’s an indubitable charmer. Cruz, who has been churning out rom-com after rom-com without any consistency in quality, finally chalks up something that is entertaining through and through.

The film starts with problem child Jackie (Kathryn Bernardo) being forced to go away to help out her mom (Lorna Tolentino) with her medical missions. Along the way, she meets Kiko (Daniel Padilla), the illegitimate son of a provincial mayor (Gabby Concepcion), who has been helping out with the medical missions as part of his duties.

The set-up’s familiar. It’s been done countless times before. The girl and the boy would at first be at odds with each other. After revelations about their hidden pains and angst, they start to understand each other and eventually fall in love.

The beauty is in the details

Cruz and her team of writers have no ambitions in revising the formula. In fact, Crazy Beautiful You works because it doesn’t stray too far from what has been tried and tested, minimizing the risks of stumbling over botched experimentation.

This isn’t exactly high praise, but at least the film succeeds in its efforts as an escapist product of a profit-minded corporation.

Given this, the subtle beauty of the film is in the details wherein the creative team has sprinkled some snippets of reality, but still within the scope of what’s generally palatable to the movie-going public.

Jackie and Kiko seem to be ordinary teenagers, the type who’d find themselves in these types of airy love stories, but their individual backgrounds reveal truths that pierce right through the core of a not-so-dandy-as-depicted society. Jackie’s a product of failed marriage, a youth turned wayward because of the irresponsibility of her upper-crust parents.

Kiko, on the other hand, has a story that is common but often-hushed because of sensitivities resulting from both local politics and pervading moral norms. He’s a product of that type of infidelity that is tolerated simply because of his powerful family name.

Even more strange is that he is aware of his place in the world, understanding of the difficult situation he was born into to the point that he can joke about it, such as his witty retort to his neighbor’s request that his father be a sponsor at her distant wedding.

Those tiny but intriguing details make the film’s adherence to formula tolerable. However, it is the performances of Bernardo and Padilla that push the film from being a mere forgettable reiteration into something whose charms can stay on for a little bit longer than usual.

There is a semblance of depth in Bernardo’s portrayal of Jackie. At first, the character’s tomboyish posturing seems forced, more a conceit to add personality to a romcom staple than actual characterization. 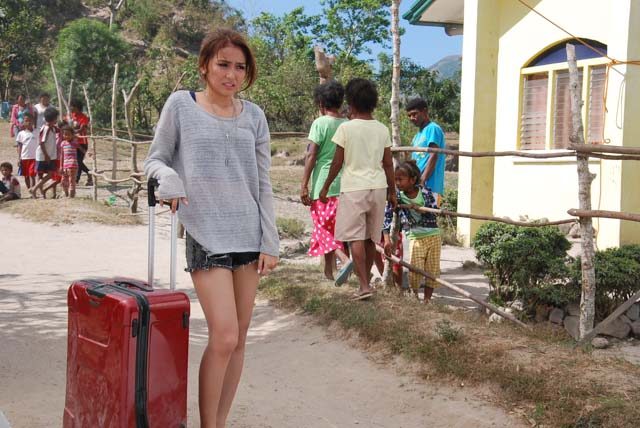 However, when the film reveals that the character’s posturing is indeed just posturing, a mask to the sweet lady she’s been trying to hold off, Bernardo becomes quite endearing.

Padilla similarly transforms. His gestures and mannerisms are reminiscent of Robin Padilla, whose onscreen romances always had him playing a toughie with a soft heart.

This seems to be the schtick that the younger Padilla is playing. Then, his character transforms, and he is also forced to unravel his pained psyche, to explode, and to cry like a normal teenager faced with dilemmas that are beyond his years. There is some maturity to the two leads’ performances that proves that there is an actual reason for their extreme popularity. Their pretty faces and celluloid love affairs are actually backed up by a sliver of understanding of what their characters are going through, no matter how simplistic those conflicts and dilemmas may be.

In the end, one cannot fault Crazy Beautiful You for being just another one of the hundreds before it and probably the hundreds after it. It does decently what it is supposed to do, and for someone who is willing to shell out money to satisfy a desire to take time off from the world’s problems for an hour or so, the film will do. – Rappler.com