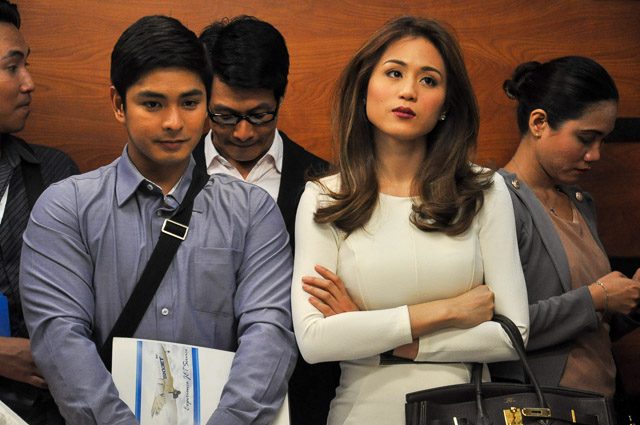 You’re My Boss opens with marketing head Georgina (Toni Gonzaga), stuck in traffic, sending sweet text messages to a former flame. Undeterred by the fact that all her messages are being ignored, she proceeds to stalk him through his Instagram account.

She then discovers that her ex-flame already has a girlfriend, who now becomes the target of her traffic-bound stalking. She scans the girlfriend’s Instagram account, curiously brimming with hashtagged selfies and photos of fluffy dogs, commenting with vicious sourness about everything that is wrong with her rival’s online activities.

You’re My Boss opens exactly like how a film written and directed by Antoinette Jadaone would. Jadaone, wildly observant of social trends and gifted with the ability to craft humor from the mundane, has created characters that are intimately linked to reality by gestures that they share with most of her audience.

Georgina’s introduction was of course mainly intended for laughs. However, it also turned her into someone instantly relatable, despite the fact that she drives a high-end sedan, sports a high-powered wardrobe, and is fueled by spite and apathy. She is but a fantasy connected to the audience by a single thread of familiarity, which is that knack for scouring through social media for the sole purpose of nitpicking. Everything else is formula

However, as soon as Pong (Coco Martin), the humble assistant of Georgina’s boss, suddenly shows up with his infectious smile and adorable ways, You’re My Boss reveals its stubborn adherence to formula. Here is the poor boy that will predictably make Georgina change her ways and make her fall in love, despite their differences.

There is absolutely no point in expecting an ending that is anything but happy. This is already dictated by a formula that has made millions for the film’s producers. What will essentially differentiate You’re My Boss from the rest of the pack is what Jadaone has molded in the middle, which is basically a hilariously elaborate ruse that would have bossy Georgina groveling and submissive Pong calling the shots. In an effort to win for her company an important Japanese client, Georgina begs Pong to act as her boss. The conceit gives Jadaone a large enough canvas for comedy, ranging from Pong comically mispronouncing even the most common of English words to Georgina being forced to shop for clothes unbecoming of her stature.

It all seems fine and dandy. You’re My Boss is charming when it needs to be, with Martin perfectly portraying a man pressured to be some notches higher than what he really is and Gonzaga seamlessly switching from being obnoxiously droll to being endearingly lovesick. Unfortunately, Jadaone peppers the romance with too many contrivances. For example, Georgina’s gnawing infatuation over a boy she never really shared any memories with is a bit too incredible to ground the theme of being unable to move on.

There is a glaring difference between intense heartache and regret over a love story that never happened. The never-ending tears of That Thing Called Tadhana’s Mace is believable because there was an existing romance that was unfairly abandoned. Georgina’s teary-eyed preoccupation however, comes across as juvenile, overblown to make it seem like a threat to her blossoming affair with Pong.

This is exactly where You’re My Boss falls apart. It succeeds in all the places that do not really matter, like the random sprinklings of funny witticisms, or the fleeting but undeniably amorous atmosphere of idyllic Batanes. The conflict in the central romance isn’t just believable. It is put on and quite shockingly insincere.

You’re My Boss is proof that Jadaone is still struggling to fit her style within the world of commercial filmmaking.

There is clear intellect in how the film plods along, in how it spends a lot of time in idle but meaningful moments and conversations instead of the montages backgrounded by recycled ‘80s pop songs that other films of its ilk conveniently utilize. Pacing sadly becomes a problem, especially with an already predictable story that is just taking too long to make its point. In one scene, Pong describes Batanes as a place where air, water, and land meet, resulting in a destination that is perfectly beautiful. In a way, You’re My Boss is the film where studio formula, Jadaone’s brand of filmmaking, and the untested tandem of Gonzaga and Martin meet. Unlike Batanes, the result here is far from perfect and beautiful, closer to being a misshapen effort, but with selective allure. – Rappler.com