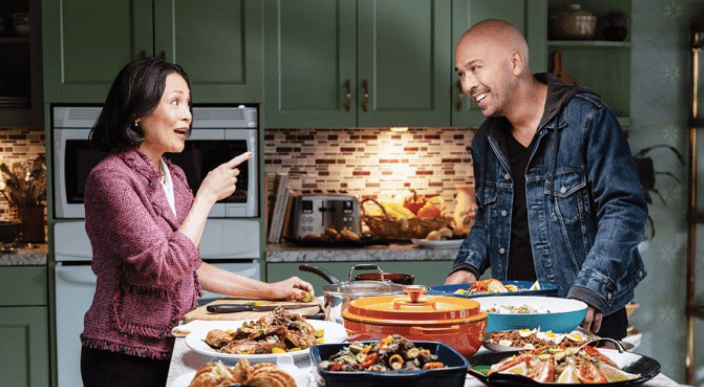 Yes, it’s a landmark: almost an entire cast of Filipino-Americans, and Jo Koy’s other Asian and comedian friends of color in key supporting roles. It’s the first time, as Jo Koy has repeatedly noted, for people of full or partial Filipino ethnicity to play their own selves — migrants in that mystical green pasture, the US of A.

I like Jo Koy. He’s brilliant enough to fill up arenas, a long way from the dinky comedy bars where he honed his stand-up craft.

He’s a likable, not bad-looking actor who taps real-life experience that, as his audiences show, stitch together common threads in the journey of immigrants or even those in their home countries.

The trailer didn’t inspire confidence, but there have been movies that transcended bad trailers, so I went anyway.

Plus, I was responding to the call of Fil-Ams, journalist-advocate Jose Antonio Vargas among them, to support this breakthrough.

Neither love for our flag nor ethnic pride could save Jo Koy’s movie.

I say this with sorrow.

The main plot has promise: a struggling comedian has to choose between family (and a mom that drives him crazy) and ongoing negotiations for what could be a career-changing project, one that would make him more than a beer-advert caricature. There’s also a testy relationship with a resentful son raised in a Beverly Hills environment that cocoons him from the messy immigrant past (and present) of dad.

A lot of potential there, even if only for some corny, Hallmark Movie-like product. Plus, this had the stamp of Dreamworks and Steven Spielberg, right?

But this was a sorry mess, a spaghetti-on-the-wall exercise that threw ostensibly funny vignettes one after the other, to see what would stick on a very frail storyline that didn’t really explore the (not very funny) quirks of this family.

It doesn’t flesh out the characters because it wastes so much time in a doleful crime caper.

It doesn’t provide insights on immigrants because it dims truth-telling in favor of cheap tricks.

The strength of good comedy is how it is able to serve up truth while making us laugh and cringe at the same time at ourselves.

That last word is key, because Jokoy doesn’t earn big moolah by throwing darts at politicians or other celebs, nor does he tackle hot issues.

He’s Jokoy, homeboy, in the same way Jimmy O Yang (doing a cameo here) is, though Yang does have a few elegantly hilarious barbs on current events and a snark behind his bland-unoffensive mien.

Jo Koy’s gazillion fans say his rice jokes and barking mom jokes are true for many children of immigrants across races and countries of origin.

But this is a movie; we expect to see the jokes’ backstories or the milieu that birthed these.

Good plots offer intimacy and then open up to let social truths filter in.

Instead of showing, Easter Sunday tells.

What it doesn’t show is the tug and pull of influences that build a noxious brew of behavior careening between servile, near-abusive, and prideful. Humans all have those traits, some more than others.

The bad dialogue here keeps the bad stuff flat, just there, nothing to make us dig deeper for enlightenment.

One scene mechanically slotted in to give Jo Koy his monologue was beyond bad: ham-fisted and bereft of any explanation of why people, especially immigrants, behave badly towards each other. If you’re going to harangue, you gotta show the roots, the why’s of problems, instead of serving up platitudes.

Maybe, and I’d like to see all the actors here get more exposure in Hollywood. But Easter Sunday’s script doesn’t inspire confidence. And even B-level sitcoms would have better acting.

Por dios por santo, it’s been some time since our sitcoms here have largely weaned actors from over-the-top, declamatory speech! We want our tiger moms to be deliciously wicked, not screaming banshees.

My Tita Landa and our Manang Dot could freeze six-foot macho dudes and teenagers in full blown tantrums without having to pitch their voices an octave higher.

Jo Koy totters between ham acting and being overpowered by screeching kin. The exaggerated mannerisms and expressions needed on arena stages don’t translate well on the screen. He is best in more quiet conversations with his son, played by Brandon Wardell.

Eugene Cordero would have been better served with scenes that could explain why he’s such a wuss and creatively criminal at the same time.

The best performances come from teenagers Wardell and the incandescent Eva Noblezada, who has comic chops to go with the drama, and Tiffany Haddish — because all three had more believable stories in the first place.

I still love Jo Koy and believe he can do it right the next time. He should realize the best comedy sitcoms and movies tackle social problems, panning out from the antics of stars. For Filipino culture, think, Home Along da Riles.

And that may be Jokoy’s main weakness.

I’ve noticed in interviews (having spent hours and hours for a month immersed in everything Jo Koy) that he shuts down anything awkward, any question that could lead to answers critical of individuals or situations.

Not sure what that’s all about: wanting to be liked, just liked and loved by everyone; or not wanting to alienate a base that seems to equate the larger truths with disloyalty — to authorities, adopted countries, or the mythical image of a homeland and people.

The movie’s director, Jay Chandrasekhar calls Easter Sunday, “an American movie.” If it is, it’s in the sense of reducing the immigrant experience into fetish images that block a deeper exploration of a rich, complex heritage.

Jo Koy has talked many times about wanting to transcend the immigrant specifics for something universal. That’s an ambitious goal but doable.

But the comedian will have to take risks if he doesn’t want to be trapped in inward-looking glass that is a big part of the problem of the country his mom left behind. – Rappler.com