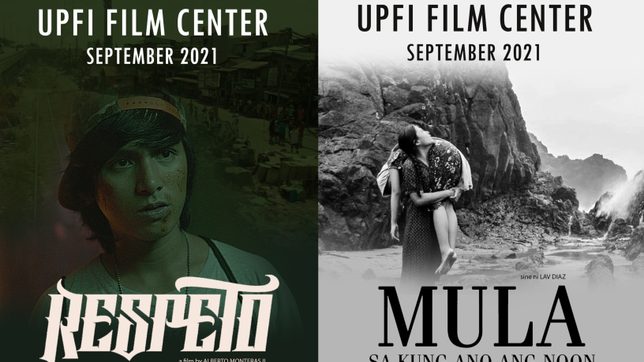 FREE STREAMING. 'Respeto' and 'Mula sa Kung Ano ang Noon' will be available from September 20 to 21.

The UPFI Film Center is holding a free online screening for movies Respeto and Mula Sa Kung Ano Ang Noon from Monday, September 20 to Tuesday, September 21, to commemorate the declaration of Martial Law.

“It’s the time of year once more that calls for collective resolve in denouncing a dark chapter in Philippine life with a corrupt President placing the entire country in September 1972 under Martial Law as a ploy to perpetuate himself in power,” UPFI said in a post.

Directed by Alberto Monteras II, Respeto tells the story of rising young rapper Hendrix, played by Abra, who is guided by aging poet and martial law veteran Doc, played by Dido de la Paz, amid a life surrounded by poverty and crime.

The politically-charged, coming-of-age hip-hop drama made its premiere at the 2017 Cinemalaya Film Festival, where it bagged several awards including Best Film, NETPAC Jury, and Audience Choice.

The film was lauded by NETPAC (Network for the Promotion of Asian Cinema), “for tackling the complex issue of human rights violation across two generations, musically connected by the vibrant and socially-conscious use of language.”

In December 2018, Respeto bagged the Jury Best Film award in the Youth Days category of the 31st Exground Filmfest in Wiesbaden, Germany. Director Monteras also received the Centenary Award for Best Debut Film of a Director at the International Film Festival of India.

Mula sa Kung Ano ang Noon (From What is Before) is a five-and-a-half hour movie directed by Lav Diaz.

Mula sa Kung Ano ang Noon has been screened locally and in different film festivals around the world, including Singapore Film Festival and the Toronto Film Festival. It also received the Golden Leopard prize at the Locarno FIlm Festival in Switzerland in August 2014. – Rappler.com