Facebook Twitter Copy URL
Copied
The West End singer and actress on what it was like being onstage with Andrea Bocelli, her dream of playing Kim in 'Miss Saigon,' and more

MANILA, Philippines – When Andrea Bocelli serenaded his fans in Manila on April 26, he shared the stage with a few Filipino talents, too. Among them was singer and actress, Christine Allado.

Christine started her theater career in the Philippines before moving to Hong Kong, then London, where she currently plays the lead in the West End production of Lin-Manuel Miranda’s In the Heights.

Watch her perform as Vanessa in the video below. She appears at around the 2:50 mark.

Just hours after her performance with Andrea, 25-year-old Christine had to shed her sparkling red Leo Almodal gown, put on her in-flight pajamas, and head to the airport for a 5 am flight to London.

On the plane, though, she also took the time to answer a few of Rappler’s questions via email. Here are some things to know about Christine.

She was an Andrea Bocelli fan long she performed with him.

Andrea grew up listening to Andrea, “I grew up singing to his songs and was inspired to study classical singing because of his dulcet tones.”

On singing with him at his Manila concert, Christine said, “I cant say it was a dream come true because I would never in my wildest dreams have dared to imagine something like that would happen!”

Christine got the opportunity to sing with Andrea because of her YouTube videos.

She has covers and videos of her performances up on her YouTube channel and now she has videos of herself singing at Andrea’s concert there too. In the video below, the two sing a duet of “Cheek to Cheek,” and at the end, Andrea brings Christine in close to demonstrate – “Like this” – before they take their bows.

In an email to Rappler, Christine recounted: “Some very important people came across my YouTube videos and after some exchanges, I was asked to send 2 audition songs which I sent via Soundcloud. I was presented to Maestro Bocelli and his management together with 2 powerhouse divas in the Philippines, and in the end he chose me! So it was very much a very blessed and lucky series of events!”

She moved to Hong Kong to pursue her dreams when she was 18. It was in Hong Kong that Christine began acting in international theater. She was in High School Musical in 2009 and The Golden Mickeys in 2010, according to her website.

As exciting as it was, moving away wasn’t easy. “When I moved away from home I knew no one really in Hong Kong, it was hard feeling homesick and alone. But in no time really, I had a group of friends there who became my family so it wasnt so bad.”

The hardest part of moving, for her, was missing her family and the food. “Being away from family is definitely the hardest part and always feeling a bit like you left a part of you behind. And the Pinoy food!!!”

Before she was a full-time actress, Christine was a business student.

Heaven, I'm in heaven! @AndreaBocelliofficial sweeping me off my feet at #CinemaWorldTour Manila leg. It is the greatest honour and my absolute pleasure to share the stage with you Maestro! Til we meet again! #andreabocelli #cheektocheek #cantodellaterra #Classical #classicalmusic #singing #concert #soprano #cinema #soundtrack #like4like #follow4follow #f4f #followme #follow #photooftheday #philippines #igerslondon

She was in her second year of taking up Business Administration in the University of the Philippines-Diliman.

She shared, “In the middle of my second year, an opportunity came knocking on my door to pursue a dream that I’d been trying to quiet for years. I really couldnt say no. And I was surprised by how supportive my family was and this fuelled by decision to take a leap of faith.”

Christine’s career is blooming now, but she’s had her fair share of struggles as well. 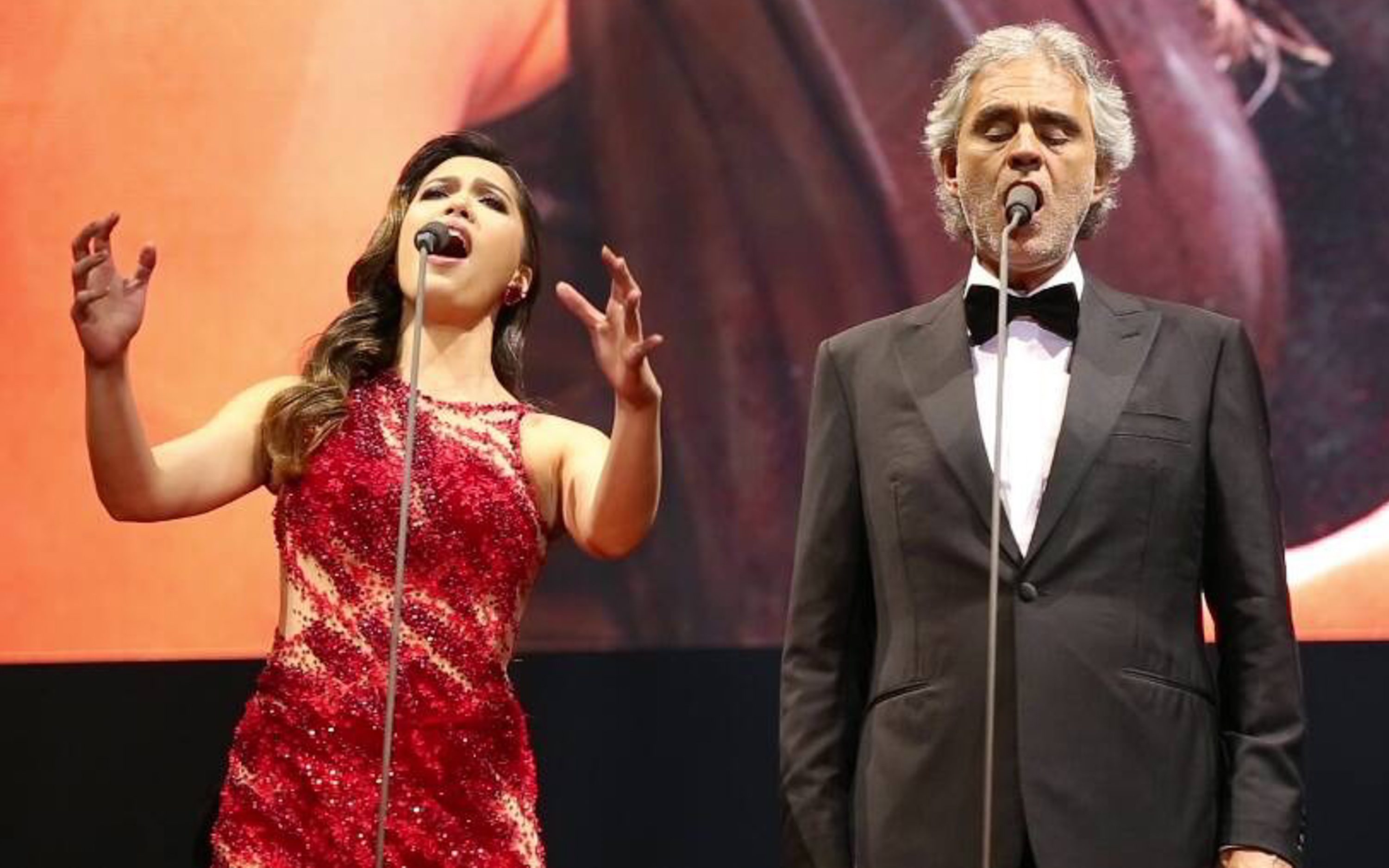 Her line of work means a lot of rejection; she said it has become a daily occurrence. “You have to learn to brush off the negativity and find your light in other things! I just try to savor the good times and keep them for the rainy days!”

“Also in London, I’m slightly limited by my ethnicity,” Christine added. “But recently there have been more and more opportunities for ‘ethnic actors’ so its a great time to be working here!”

Zyrah Rose is a 4-piece girl band. “We sing epic cinematic music ala Hans Zimmer with vocals,” Christine described the kind of music they make.

Zyrah will be making their way through Britain’s Got Talent season 10.

She was in the original West End cast of Fat Boy Slim’s Here Lies Love.

Fatboyslim in the house! Here Lies Love gala after party with the creator himself xx what a lovely man too! #fatboyslim #herelieslove #NationalTheatre

When Christine moved to London, she was in other productions before In the Heights.

Aside from being in Sir Tim Rice’s musical From Here to Eternity (2013), she was also the understudy for the character Imelda in the West End production of Here Lies Love.

She dreams of playing Kim in Miss Saigon.

“I’ve grown up always wanting to play Kim in Miss Saigon of course!” Christine said when asked about her dream role.

If Christine gets her dream, she’ll be following in the footsteps of Lea Salonga, who played Kim in the West End production of Miss Saigon and on Broadway.

Rachelle Ann Go, who is currently playing Fantine in the Manila run of Les Miserables, was also in West End’s Miss Saigon as Gigi Van Tranh.

“But then there’s also Maria in West Side Story which is just the most beautiful role,” added Christine. “And Clara in Light in the Piazza, my favorite musical of all time.”

Did you see Christine perform with Andrea Bocelli in Manila? What did you think of her performance? Let us know in the comments! – Rappler.com