Facebook Twitter Copy URL
Copied
During her 'Revival' concert in Manila, Selena Gomez creates electric moments that all concertgoers seek, where the music was emanating from her with a surreal, natural ease

What comes to mind when thinking about Selena Gomez’s concert is one of my all time favourite quotes, “Fake it ‘till you make it.” No, it’s not meant in a negative way or as a derogatory statement – as one might assume at first glance – but an inspirational phrase said to me by one of my early mentors, Zig Ziglar.

It’s often misinterpreted as a suggestion to put up pretenses to fool the masses. Let me tell you, the masses are not so easily fooled. This is more of a phrase about finding the strength from within (maybe fooling yourself a bit) and more about showing up.

And show up she did! Indeed, just a few years back, her first scheduled concert here, and parts of of the Australia and Asia for that matter, was canceled, a huge disappointment for fans. 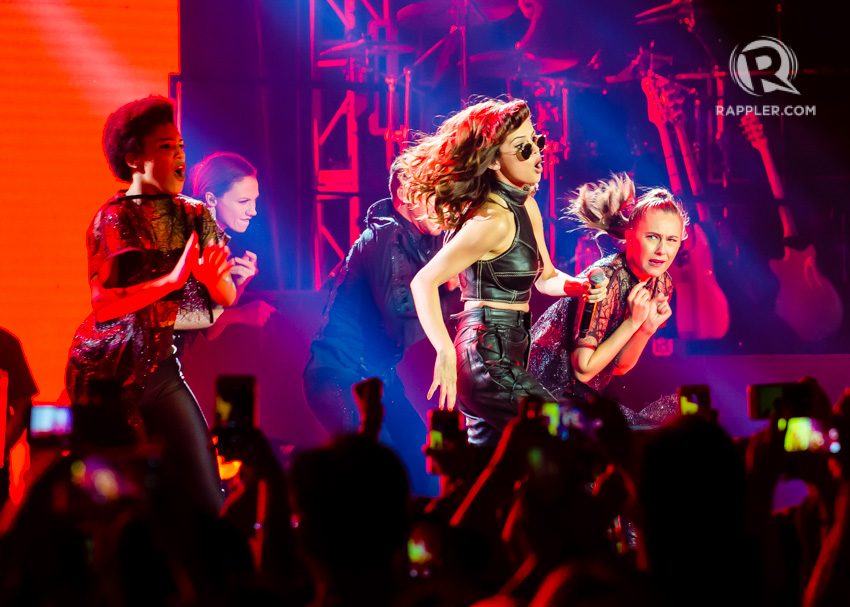 We all have tough days. It’s no different for a superstar, perhaps even more taxing when your life is viewed under a microscope by millions. Regardless, you just have to pull up your bootstraps, walk the walk, put on a smile and do your best, sometimes it’s more than half the battle, to simply just show up. Surprisingly, after you get the ball rolling, something wonderfully instinctive begins to take over and you’re rocking and rolling before you even realise it, once you get the rhythm, it ain’t so bad after all.

I interpreted the flow of this concert in a similar fashion. The stage production here was pared down a bit, in comparison up to the system in the US portion of her Revival tour. There were interactive rolling stage-prop triangles incorporated into the design, at times used as screens for magical costume changes, huge angular tipped video panels, the center one of which, lifts from the base to allow for a grand entrance and exit, multi-level scaffolding for dancers and musicians, enormous stage-to-ceiling inflatable single stem red roses and huge LED orbs. 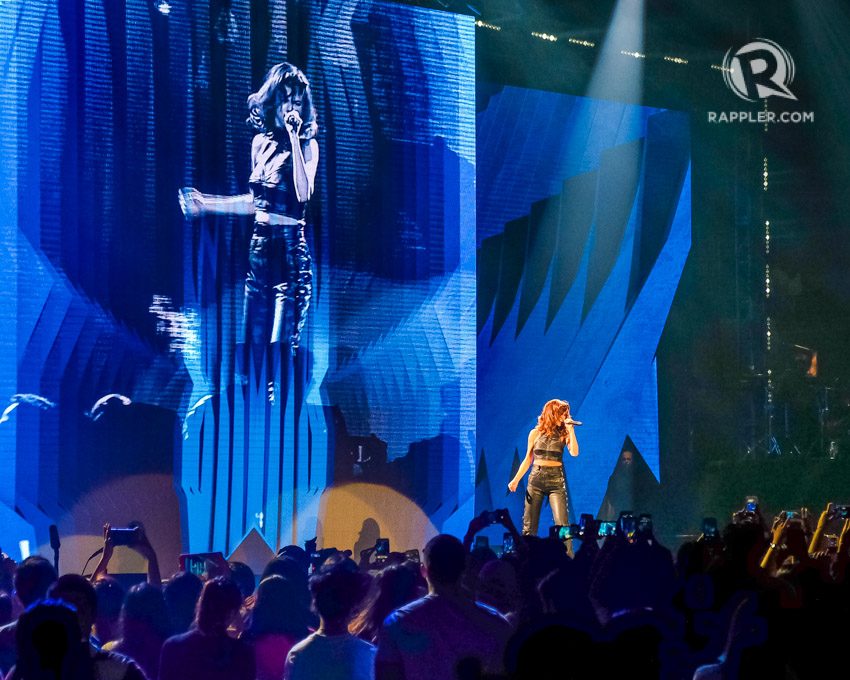 Many of the aspects were present here, with musicians positioned up on the stage scaffolding at the start of the show and the same props you’d see in previous productions, but some pieces had been simplified, the intricate stage deck morphed into the typical rectangular shape design with a catwalk added for drama, no trap doors needed.

With live video feeds often showing close ups or perfectly planned full shots so it provided a connection with the entire crowd, including the folks further away from the stage. It was in a wonderfully animated style, made it relatively easy to catch images showing a vibrant expression. There were various themed segments, often with a risqué style you typically witness in today’s pop music. A polished branded look to the videos, which were presented at perfect intervals, coincided with multiple outfit changes for the dance crew and Selena. The stage design, video presentations and outfits, all matched up quite well.

Everything skilfully matched to the composition of the various segments and the overall feel of the show. The giant roses were cool, to accompany a New Orleans Mardi Gras stage but what impressed me was the creative use of such a common item, such as an exercise ball, as they mixed it into an entertaining and energetic routine.

This dance team really had it together, bounding and tumbling, constantly moving to the beat, a well-executed and carefully choreographed routine throughout, keeping up the energy up, a nice complement to the show.

There were some bumps, but just as in my favourite quote, somewhere along the line, maybe 6 or 7 songs in, something changed and she began to hit her stride. A concert is a two-way street, with travelers in either direction, often advancing at different speeds, and the energy from the fans began to elevate the performance itself.

As the concert progressed you could feel her enthusiasm catching up with the crowd’s fervor, and you could see it physically, with a zip in her step and the vocals smoothing out. She created electric moments that all concertgoers seek, where the music was emanating from her with a surreal, natural ease and artist and the admirers connected as one. She addressed the crowd periodically, commenting on their exemplary demeanor, tidbits of insights about the upcoming song, along with quips about a life lesson in general.

There was a portion of the show where they rocked it out, flanked by her two guitarists, tearing up some outstanding riffs, as she belted the vocals as the audience cheered her on.

My favorite portions of the concert took place later on, the Eurythmics cover song, “Sweet Dreams”, music from my youth that I can relate to and when it was just her at the grand piano center stage, that’s where she really shined. There were no dancers, stage props or other distractions, just a simple spotlight, highlighting her incredible vocal gift, without the overwhelming static that can often mask much of what we want to hear, on and offstage.

It was one of the more tender and touching moments of the show. By the end of the event everyone’s speedometer was in sync, just how you’d envision a performance should be. Like a steam engine, which takes a while to build up speed, once you get it going, there’s no stopping it and it appears that her Revival Tour is doing just that. If you follow her career path, since the beginning, as a child actor on the Barney show, to her years with the Disney organization, leading up until now, you’ll know her journey is a singular one, surpassing what a typical performing artist would have experienced in their entire career, never mind at the tender young age of 24. Keep an eye out for her continuing saga with the good, the bad and the ugly (she said herself that her fans really have seen most of her life, as she grew up in front of the camera) for all to see, just scratching the surface on this woman’s talent, hence her enormous popularity.

Kudos for hanging in there and overcoming challenges that would send most folks running home with their tail between their legs. She promised the crowd that she would return. Some artists just say that, but in two or three years time, I think she’ll show up again – make sure you don’t miss the show next time! – Rappler.com