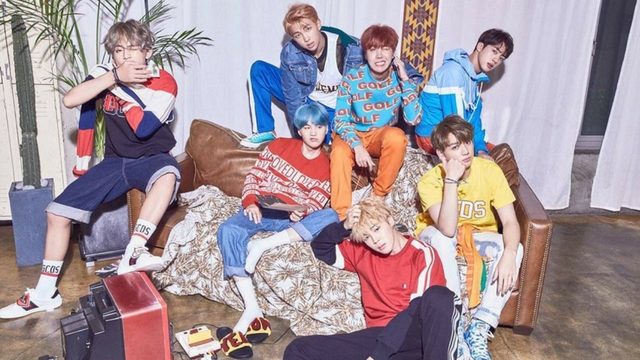 Anyone who’s ever so much as cracked open a Harry Potter book knows that fandoms are a force to be reckoned with, and while some may argue that it takes a certain preternatural disposition to be a fanboy/fangirl (that is, one that tends towards borderline obsession and dedication that would rival that of the most devout), the rising K-pop fandom seems to be all encompassing.

No one seems to be safe from the Hallyu—not manang at the corner store (who’s still playing Psy’s 2012 hit “Gangnam Style” from her phone), and not even proclaimed “queens of all media” (I’m looking at you, Kris Aquino).

It takes a lot to inspire the kind of manic devotion that some K-pop fans brandish like a weapon, infecting not just your social media feeds but apparently swinging even worldwide Billboard charts in their favorites’ favor.

Lately, the name that seems to be on the tips of everyone’s tongue is BTS or Bangtan Sonyeondan, which translates from Korean as, and brace yourself for this, Bulletproof Boy Scouts, but largely rebranded in 2017 as Beyond the Scene.

Most people refer to them as simply the Bangtan Boys — a 7-strong rap and vocal group who first reached general pop culture consciousness when they managed to dethrone none other than Justin Bieber for Billboard’s 2017 Top Social Artist Award after 6 consecutive years.

Praisin’ the Asian and sorely needed representation in Western pop culture aside, it’s not surprising that the group went viral and searches for their keywords skyrocketed post-award, because really, how? More appropriately, who even are these boys? Where did they come from, and how did their fandom (fondly dubbed ARMY, but you’re going to have to search for what it stands for yourself because it’s a little cringe-y) manage to bolster them to the top, overtaking artists like Selena Gomez and Ariana Grande?

Perhaps most importantly, why?

Whether you’re driven by morbid curiosity (and really, we don’t blame you, the K-pop industry is fascinating) or already have one of their songs stuck as an earworm and want to know more, you’ve come to the right place.

Let’s take a look and find out why 7 boys from South Korea inspire such love and madness.

Everyone loves an underdog

BTS released their first single and music video (MV) in June of 2013, when their eldest member (Jin) was 21-years-old and their youngest (Jungkook) was only 16.

They came out with a hip-hop aesthetic that was a mishmash of Western and Korean influences (read: gaudy, gold bling and HBA street fashion), with a little English sprinkled into their predominantly Korean lyrics.

An important thing to remember here is that BTS doesn’t hail from one of the big entertainment companies in South Korea and thus didn’t debut to the public with extensive promotions and loud fanfare. Quite the opposite, in fact—they came under fire numerous times early in their career for everything – from making careless comments to accusations of plagiarizing concepts from bigger, more popular groups. Two of the rappers in their 3-person rap line also got a lot of grief from the underground they hailed from, claiming that they had sold out.

But the group and their company stuck it out, using the haterade to fuel them through their rocky beginnings and hitting back with songs like “We On” and “Cypher Pt. 3: Killer.”

By sheer will and dedication to their craft (and maybe more than a little PR magic), they managed to climb up the ladder over the years to their current position at the top, charting high on Billboard and iTunes charts, breaking records left and right, and bagging much sought-after awards.

Music with a message

Early on BTS made it clear that their goal was to lend their voice to topics that largely go undiscussed in rigid, conservative Korean culture, covering everything from the youth’s struggles with school and society to love, sexuality and mental illness. Their aesthetic and sound evolves with every album, keeping up with global and Korean trends in music and fashion, but they’ve largely stuck to their messaging.

This in itself is one of the reasons why the group’s music resonates so deeply with their fans. These days K-pop is mostly bubblegum pop and endless lyric repetitions set to catchy hooks, but BTS is slowly bringing back the spirit of a genre that was patterned after that of American hip-hop — that is, more as a movement rather than a tried and tested way to make money.

One of the biggest factors for this is that the members themselves make their own music, making it a personal as well as collaborative effort between artist and company. Unlike other groups, who have composers, producers and writers spoon feeding them bops and ballads, at times even buying tracks from abroad, BTS writes their own lyrics and produces their own sound. It’s really no wonder then, that their fans feel such a strong connection with the group.

It’s also appropriate to note that BTS is using their fame to spread their message by working with UNICEF on anti-violence campaign called ‘Love Myself,” which you can find out more about on the website.

Hand in hand with the music come their concepts, which are so intricate and extensive that there’s no doubt in anyone’s mind that they’ve been planned years in advance.

Over the years, it’s become evident that there’s a slowly unraveling storyline within their MVs and other videos, reeling new fans in and keeping old fans hooked. Fan theories abound everywhere from Twitter to YouTube, fueling anticipation for every new album and every clue that comes with it. There’s no paying for PR like this, and it’s an approach that so far only BTS as an idol group has introduced to the entertainment industry.

The members themselves play into it, going as far as to claim cluelessness but dropping hints on their social media counts and even in their acceptance speeches for awards.

Any artist who wants to break onto a music scene outside of their country faces a language barrier, but amazingly enough BTS has managed to jump that hurdle.

Only one of the septet is able to speak fluent English (with the rest of them doing their best), but most fans either slug through fan-made translations or resort to learning Korean themselves. It speaks volumes that their music is able to transcend that barrier, and BTS is resolute in continuing to release music predominantly in Korean—an act which is laudable in itself because it shows their pride in their language and culture, as well as their reluctance to distance themselves from the fans that brought them to their current standing.

Fandoms and fanservice in Korea are worlds away from the Western entertainment industry, with idol groups positioned as boyfriends and girlfriends as applicable.

This aspect is no different with BTS, except that the 7 of them share the same account on Twitter and Fan Café (a Korean members-only forum where artists can post messages and images as well as chat with fans). They dote on fans with messages to stay healthy, do well on exams, and generally to keep ‘fighting,’ more often than not with accompanying selfies or snapshots of their daily lives.

It’s a big jump compared to being a fan of Western artists, who are largely untouchable and maintain a sense of celebrity even on social media. The fanservice that idols provide is a big factor in the industry’s success, creating a sense of intimacy between both parties and creating the illusion that they are attainable (and available) to the public.

One difference with BTS is that the members never fail to thank their fandom for their support, which is highly appreciated by ARMY being that they stream videos and purchase singles and albums religiously, helping the group climb up local and international charts as well as win awards that are up for public voting.

Unlike other groups, who often appear on talk shows and variety programs during promotional periods to help boost visibility and increase PR, BTS is known for producing their own shows on an app called V LIVE, a broadcasting and streaming platform similar to YouTube. There’s abundant content to be found on their channel, from free shows like BTS Gayo, Run BTS! and live vlogs, to pay-to-play behind the scenes features and shows like Bon Voyage.

It’s highly entertaining, to say the least. Despite having to rely on subtitles to understand what’s going on, it’s fun to see idols get scared out of their minds on a zombie run, watch them prepare for performances, and generally be themselves as they touch base with fans.

There’s years worth of content for new fans to wade through on the official channels and thousands of fan-made compilations to explore, and BTS has recently taken things to a new level with the release of their YouTube Red documentary Burn the Stage, which chronicles their recent worldwide tour and presents the members in a refreshingly earnest light.

Pick a bias, any bias

Becoming a BTS fan, or a K-pop fan in general, comes with a pretty steep learning curve. There are lots of terms to learn and things about Korean culture to take into account, but one of the main ones is having a ‘bias’ or choosing a favorite among the members.

Easier said than done when it comes to BTS, but let’s face it, you’re probably here because these beautiful boys with their flawless skin probably caught your eye and made you do a double (or triple) take.

We’ll let you decide on a bias for yourselves, but here’s some basic information to help you along.

RM, or Kim Namjoon, known as Rap Monster until he officially changed his stage name in late 2017.

RM is the Leader of the group as well as a member of their rap line, and he writes and produces a bulk of BTS’ music. He released his own mixtape, also titled ‘RM’, in 2015.

Jin, or Kim Seokjin, is the eldest member of the group. He’s part of their vocal line and is the official Visual of BTS — do we really need to explain why?

Suga how you get so fly?

Suga, or Min Yoongi, is also a member of the rap line and has written and produced a number of songs both for and outside of BTS.

In 2016 he released a self-titled mixtape under the name Agust D to differentiate it from his work as BTS’ Suga.

J-Hope, or Jung Hoseok, is the third member of the rap line on top of being BTS’ main dancer and sub-vocalist. In March 2018 he dropped his mixtape, titled Hope World.

Jimin, or Park Jimin, is part of BTS’ vocal line and dance line.

V, or Kim Taehyung, is another member of the vocal line and is a Visual along with Jin.

Jungkook, or Jeon Jeongguk, is the youngest of the group. Early BTS tracks will find him rapping, but these days he’s part of their vocal and dance lines.

Have you joined ARMY? Let us know who your bias is! – Rappler.com