Facebook Twitter Copy URL
Copied
Who is Seventeen and why are they taking the world by storm?

MANILA, Philippines – There’s a chance you’ve only heard of them now, but it’s actually the third time for Seventeen to visit the Philippines and perform for their fans.

Seventeen is a 13-member South Korean boy group formed by Pledis Entertainment. They debuted on May 26, 2015, and were the first K-Pop boy group to have debuted with a one-hour showcase broadcasted in MBC, a major broadcasting channel in South Korea.

Even before they debuted, the boys of Seventeen were in different shows during their trainee days.

They first appeared in the live broadcast series of Seventeen TV where the trainees were first introduced. Seventeen TV lasted for five seasons, concluding to concerts called Like Seventeen.

They also appeared in MBC’s Seventeen Project: Big Debut Plan, which lead to their debut showcase.

Who’s who in Seventeen? Born on August 8, 1995, S.Coups trained for 6 years under Pledis Entertainment. He is now Seventeen’s leader and main rapper.

Seventeen’s lead rapper and sub-vocalist is Wonwoo, who hails from Changwon, South Korea. He started training in 2011 and appeared in NU’EST’s “Face” and Hello Venus’ “Venus” MV. Kim Mingyu is Seventeen’s lead rapper, sub vocalist, and visual or face of the group. Born on April 6, 1997, Mingyu is also the tallest of the group. The group’s half-American main rapper was born in New York. However, Vernon and his family moved to Korea when he was five years old. He became a trainee in 2012. Woozi is Seventeen’s lead vocalist and composes songs for Seventeen. He has also written songs for other K-pop artists like IOI and Ailee. Woozi also plays the guitar and piano. He became a trainee in 2011. Jeonghan is both Seventeen’s lead vocalist and the “Angel” of the group with his innocent looks. Born on October 4, 1995, he became a trainee in 2013. 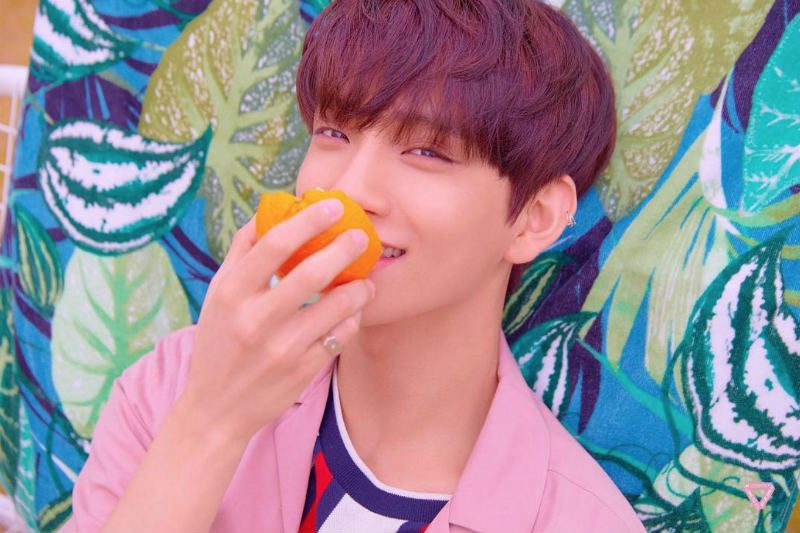 Joshua, one of Seventeen’s lead vocalists, was born in America. Joshua is a huge anime fan and the gentleman of the group. Seventeen’s funniest member is DK, who is also their lead vocalist. DK shares the same birthday as Vernon, but is older by a year. One of the voices behind the team’s powerful vocals is Seungkwan, Seventeen’s main vocalist. Pegged as the group’s mood maker, Seungkwan cannot not be missed in any of Seventeen’s variety shows. Seventeen’s lead dance and sub-vocalist hails all the way from Shenzhen, China. He started as a child actor in China before moving to Korea. Like Jun, The8 came all the way from Anshan province in China. The8 is a multi-talented lead dancer, sub-vocalist, and sub-rapper of the group. He is in charge of b-boying in the performance team. He’s also good at martial arts. Dino is Seventeen’s main dancer, sub vocalist, lead rapper, and maknae (youngest in the group), born on February 11, 1999. He choreographed their songs “Jam Jam” and “Flower.”

Why is the Philippines special for Seventeen?

Seventeen first visited the Philippines on August 2016 for a two-day fan-meeting in Solaire. Their popularity came as a surprise – the fan meeting was initially supposed to be a one-day event only. Since tickets sold out fast, the organizers decided to make it a two-day event.

The group came back to the country for their first world tour, Diamond Edge. They held their concert on October 6, 2017.

Seventeen also had their photoshoot for their album Teen, Age at a resort in Calatagan, Batangas.

In May 2015, Seventeen released their first EP, 17 Carat. They also got the name for their fans form this EP, who they call “Carats.” They promoted the genre-bending song ‘Adore U’ for this first EP.

Their second EP, Boys Be, is the highest selling album for rookies in 2015, its title track is “Mansae.”

Their repackaged album came out with the title track, “Very Nice.” When the music video was released on Naver, it received over a million hearts, solidifying Seventeen’s growing popularity worldwide.

One of Seventeen’s most popular songs was released the following year of May. “Don’t Wanna Cry” came from their fourth EP, Al1. The EP Al1, became so popular that it won Album Of The Year for the second quarter at the 2018 Gaon Chart Music Awards.

Seventeen released their second full-length album entitled Teen, Age where they promoted their title track “Clap.” They won the Disk Bonsang at the 31st Golden Disk Awards with their second studio album.

In February 2018, Seventeen released a special album Director’s Cut featuring a song for their fans entitled “Thanks.”

Seventeen officially debuted in Japan with their album We Make You on May 30. The music video was released earlier on May 16 with the title track “Call, Call, Call!”

Their latest album release, You Make My Day, is Seventeen’s fifth EP, and is their best-selling album overall. It was awarded Platinum status by Gaon Music Chart. They promoted their fifth EP with the song “Oh My.”

Get ready for Ideal Cut in Manila

Seventeen is set to come back in Manila for their second world tour, Ideal Cut on September 29, 2019.

While it’s their third time to come to the Philippines, it’s sure to be another spectacular show – just think about the new songs they’ve released the past year and the never-ending energy from the boys. – Rappler.com