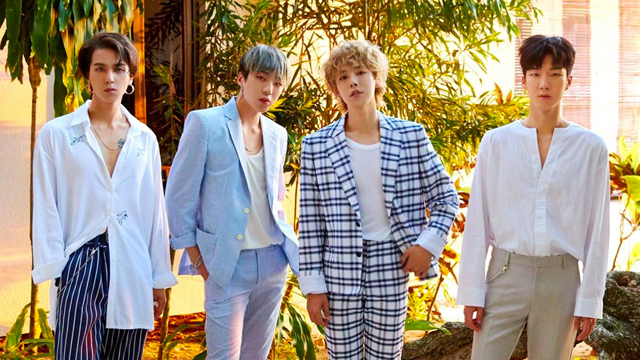 MANILA, Philippines – Korean pop (K-pop) group WINNER is coming to the Philippines on Saturday, November 10, for the Manila stop of their 2018 Everywhere Tour.

The 4-member group is no stranger to the country: they were here in 2014 and performed during labelmate 2NE1’s All or Nothing concert, and again in 2018, when they shot WINNER’s Summer Story in the Philippines in El Nido, Palawan.

But their November 10 concert will be their first time headlining a concert in Manila, and WINNER fans (collectively known as Inner Circle) are already counting down the days until they see Yoon (Kang Seung-yoon), Mino (Song Min-ho), Hoony (Lee Seung-hoon), and Jinu (Kim Jin-woo) in person.

Ask any Inner Circle (or Inseo) why he or she loves WINNER, and the person would probably start by talking about how talented the boys are individually and as a group.

WINNER made their debut in 2014 as a 5-member group under YG Entertainment, and went on to become an award-winning rookie group that year, with hits like “Empty” and “Don’t Flirt.”

While they came out with a mini-album in 2016, WINNER’s next big hit won’t be until 2017, when the group came back with 4 members and dropped “Really Really.” Their 2018 song “Everyday” also reached No. 1 on all 6 major Korean realtime charts just hours after its release.

But what really endears WINNER to their fans goes beyond the studio albums. Here are 4 reasons why we love WINNER:

1. Most WINNER members write and compose their own songs. They sing really well live, too.

One of this group’s strength has always been their ability to make their own music. They’ve been actively involved in creating all of their songs since their debut album, 2014 S/S, up to their latest album, Everyd4y.

With members who have been participating in reality shows as early as 2010, it comes as no surprise that the boys are already comfortable appearing not only on music shows but in variety shows as well.

Who can forget WINNER TV, where the boys were officially introduced as WINNER after winning WIN: Who is Next? Or Half-Moon Friends, where they ran a daycare center and took care of 10 children? And then there’s Youth Over Flowers, where the 4 members explored Australia on a tight budget.

Individually, the boys are variety show regulars too. Mino has been in 3 seasons of New Journey to the West already, Jinu was a regular cast member of Wizard of Nowhere, and Hoony recently coached dancers in Dancing High.

3. Everyone is a bias wrecker.

In K-pop speak, the term “bias” refers to a fan’s favorite member, that one person who you think stands out among the group. But in a small group like WINNER, it’s really hard to choose a bias and stick with him. Not when Yoon swoons with his own rendition of “All of Me,” or when Mino whips up a quick portrait of you, or when Jinu isn’t ashamed of admitting he’s a big G-Dragon fan, or when Hoony starts killing it on the dance floor.

Fans also get to know more about each member through their social media accounts. On Instagram we see Yoon’s hobby of taking pictures, Mino’s knack for creating art, Hoony’s updates on his dog Haute, and Jinu’s, well, selfies. When you a stan a group that is generous with their social media updates, how do you even choose a bias?

4. WINNER does the best covers.

This one needs no explaining. Just listen to this rendition of 2NE1’s “Missing You” (jump to 3:47 mark):

This version of Wonder Girl’s “Nobody”:

And of course, their cover of the BIG BANG hit, “Haru Haru”: