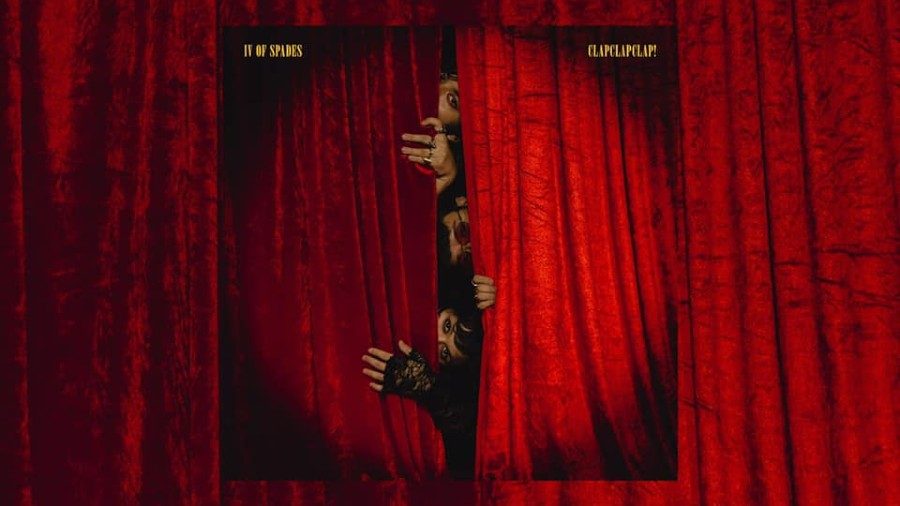 Having experienced enormous success after the release of just a handful of songs, pop rock band IV of Spades faces the unique challenge of risking a sophomore slump with their debut album.

The trio (composed of vocalist and bassist Zild Benitez, guitarist Blaster Silonga, and drummer Badjao de Castro) has already gone through more drama than any music group probably needs this early into their career.

Fan expectations are understandably high, given the strength of the band’s earlier releases and of former IV of Spades frontman Unique Salonga’s own full-length album, which was released in August 2018. Thankfully, the remaining members have stayed relatively quiet and hard at work.

The result of that work is CLAPCLAPCLAP!, a full, 15-track record that doesn’t include IV of Spades’ first few hits (“Mundo,” “Ilaw sa Daan,” “Hey Barbara”) and instead commits to the new direction that the band is taking.

This is not to say that they’ve forgotten their origins; several songs on the album (the singles “In My Prison,” “Bata, Dahan-Dahan!” and “Take That Man”) still give credit to Unique. But IV of Spades is clearly done with attempting to stick so close to their musical influences from the 1970s.

For better or worse, CLAPCLAPCLAP! sounds very much like a record from a band in flux. On one hand, these three young men remain just as versatile and talented as they’ve proven themselves to be, playing with little elements of funk and disco while staying accessible to a wide audience. On the other, the album does exhibit a bit of an identity crisis, with some clumsy lyrics and a general lack of overall structure keeping it from becoming truly memorable. It doesn’t necessarily announce a robust new identity for IV of Spades — working better as an enjoyable sample of what sounds the band has been toying around with in the studio.

There’s still much fun to be had here, though. The album goes from the hazy psychedelia of “Sweet Shadow” and “I’m a Butterfly” to the post-punk stylings of “Take That Man” and the groovy, mid-tempo jam of “Come Inside of My Heart.”

And the boys are strong performers no matter the genre: Silonga only really gets to shine during solos, but he makes the most of every note; de Castro elevates more than a few tracks without ever getting in the way; and Benitez proves himself a star, his bass parts often emerging as the strongest, most vital elements of these songs.

IV of Spades’ decision to play across a relatively wide spectrum of rock is most effective when their lyrics explore the anxiety of growing up. Their images of kids are often placed alongside the desire for freedom, making it clear how the band perceives the kind of world the youth are inheriting.

In “Bawat Kaluluwa,” for example, Benitez sings, “Pinosas ang kamay ng bata upang ito’y maging isang sunud-sunuran.” The blend of old school sensibilities and modern, up-tempo pop shines within this context, depicting IV of Spades’ generation as people who are perpetually hounded by the constant pressure to be ready for something impossible to anticipate.

Unfortunately, this focus on children doesn’t last, and CLAPCLAPCLAP! ends up wandering into the far less interesting theme of complicated, uncertain relationships. Nothing is inherently wrong with this subject, but IV of Spades doesn’t approach it with nearly as much self-reflection. The relationship dynamics that Benitez sings about are more frustrating than tragically romantic.

A song like “Come Inside of My Heart” (which starts with the words “I love you but I don’t really show you, I’d call you but only if you want me, too”) should be more emotionally complex, but its dreamy atmosphere definitely doesn’t allow for that nuance.

It doesn’t help that CLAPCLAPCLAP! is content with recycling these notions of an impossible love without clearly tying them back into the ideas presented during the first few songs. It winds up sounding a little lost, with an inconsistent flow of energy that only makes the album feel longer. Even when the band hits its final track (the piano-based “I Would Rather Live Alone (I’m Not Who I’m Today)”), the impact is dulled by the length of the journey. The record concludes without making a confident statement. And while it’s true that not every album needs to have a grand thesis, the themes presented here are too promising to just leave hanging.

In a word, CLAPCLAPCLAP! is hesitant. It’s made many valiant steps in the right direction, but it frequently seems to second guess itself. This can be seen in the album’s production, which has moments of innovation that are sadly few and far between. There’s that sudden muffled tone near the end of “Bawat Kaluluwa,” the carnival-esque bridge of “Bata, Dahan-Dahan!” and the thrillingly frantic outro of “I’m a Butterfly.” But these parts are over far too quickly. One can imagine a producer or the label stepping in to remind them not to scare off the newcomers.

Still, every band knows that the live stage is where their real proving ground is, and CLAPCLAPCLAP! at least promises that IV of Spades should still be capable of putting on a great show. It must be emphasized that Benitez, Silonga, and de Castro have definitely improved as musicians, making more interesting choices, moving away from the ‘70s obsession, and showing no major signs of slowing down, even after the kind of high-profile public split that they experienced. And, thankfully, there doesn’t seem to be any evidence of pettiness in their lyrics. They’re here to work.

CLAPCLAPCLAP! won’t redefine the local music scene by any means; IV of Spades still has a ways to go before they find a style that fits them, much less master that style without sounding derivative. But the band has shown that they’re at least aware of where they stand and who it is they perform for.

The album remains intriguing for its brief glimpses into the millennial burnout experience, or Gen Z anxiety, or however you want to describe the stress that young people are currently living with. We can be thankful that IV of Spades gives us a way to dance through it. – Rappler.com Emil Hofileña is a writer from Quezon City. He is currently taking his graduate studies in Communication.

He was selected as a juror for the 2018 Filipino Academy of Movie Arts and Sciences (FAMAS) Awards, in the full-length feature category.