U2 releases new album for free in Apple surprise

Sep 10, 2014 7:13 AM PHT
Agence France-Presse
Facebook Twitter Copy URL
Copied
Bono describes the album, the band's first since 'No Line on the Horizon' in 2009, deeply personal and says the release served as 'instant gratification' 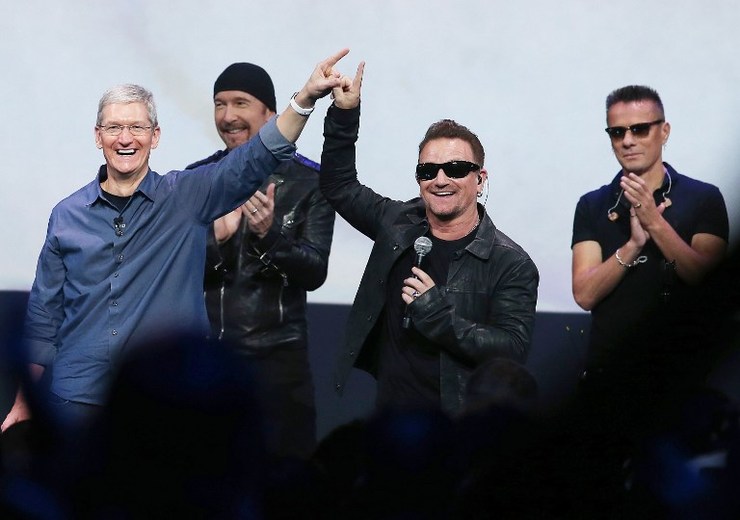 SAN FRANCISCO, USA – Irish superstars U2 released their first album in five years for free on Apple’s iTunes Tuesday, September 9, in a surprise, attention-grabbing step as the tech giant unveiled its latest smartphones.

At the much-anticipated launch event near San Francisco, U2 played a single from the new album – “Songs of Innocence” – which Apple announced it had sent out at no cost to half a billion iTunes customers around the world.

Apple CEO Tim Cook, who joined U2 frontman Bono on stage for a playful countdown to the unexpected announcement, described the move as “the largest album release of all time.”

Bono described the album, the band’s first since “No Line on the Horizon” in 2009, deeply personal and said the release served as “instant gratification.”

“From the very beginning, U2 have always wanted our music to reach as many people as possible, the clue is in our name I suppose – so today is kind of mind-blowing to us,” Bono said.

“The most personal album we’ve written could be shared with half a billion people – by hitting send. If only songwriting was that easy.”

Apple – which revealed its first smartwatch, as well as the iPhone 6 and iPhone 6 Plus at the event – said it would provide the album for free to customers who set up iTunes accounts in the next five weeks.

A physical copy – featuring acoustic versions, four additional tracks and a liner booklet – will be released on October 13.

U2 – who released some of the most acclaimed albums in the 1980s including “The Joshua Tree” and “Rattle and Hum” – would have been virtually assured of wide sales if they had sold the new work from the get-go.

Apple did not disclose financial arrangements with U2, whose members are multimillionaires.

U2 has collaborated for years with Apple. Bono alluded to the relationship when he told Cook, “We are the blood in your machine, oh Zen master of hard- and software.”

‘I’m still standing on that street’

Musically, the album frequently harks back to the band’s 1980s sound with The Edge’s tight guitar leading the way with occasional supporting keyboards. It was produced by Danger Mouse, who has worked with US indie icons Beck and Sparklehorse, as well as the more bluesy Black Keys and Norah Jones.

The first track, which U2 played for the release, is entitled “The Miracle (of Joey Ramone),” a tribute to the late singer of the New York punk band. While the sound is significantly more controlled than a punk song, U2 members cited The Ramones as an early influence after they snuck into a show in Dublin without tickets.

“Songs of Innocence” frequently returns to themes from childhood. The track “Iris (Hold Me Close)” alludes to Bono’s mother, who died of a brain hemorrhage when the future singer was a teenager.

“Something in your eyes took a thousand years to get here,” Bono sings, explaining, “I got your light inside of me.”

Bono has previously memorialized his mother in songs such as “I Will Follow” from the band’s 1980 debut album “Boy.”

On the latest album, another song harks back to Bono’s childhood. Entitled “Cedarwood Road,” it’s a reference to the Dublin street where he grew up.

Bono, who wrote about Northern Ireland’s violence in songs such as “Sunday Bloody Sunday,” on his latest album entitled a track simply, “The Troubles,” featuring Swedish singer Lykke Li.

But it’s no simple political allegory, with Bono singing, “I can live with denial, but you’re not my troubles anymore.” – Rappler.com