MANILA, Philippines – They needed no front act, no instruments or pyrotechnics, and kept no one waiting. The fans had waited long enough – and it was showtime.

Right on cue just a few minutes past 8, as promised, Scott Hoying, Mitch Grassi, Kirstin Maldonado, Avi Kaplan, and Kevin Olusola of Pentatonix burst onstage in a flurry of sound and carefully synchronized movement, and didn’t look back for the 90-minute show.

Let’s take a look at some of the evening’s highs:

It’s no secret that PTX members are big fans of Queen Bey, and many of their numbers incorporate their unique take on her hits.

One of their earlier YouTube videos from 2013, the Beyonce medley, is still one of their best-loved.

It’s filled with Scott’s distinct falsetto, Mitch’s pure power, Kirstie’s alternately fierce and vulnerable verses – and through it all, the pulsing rhythm set by Avi and Kevin.

Pentatonix tells the Pinoy crowd their success story – and asks, who cried the most when they won 'The Sing-Off'?

The gang took a break from singing to tell their story, from winning The Sing-Off, to being dropped by their label, to making it big on YouTube.

Behind them, the screen showed moments from their past – including their reveal of who cried the most when they won (Avi, of course).

It was a blessing in disguise, they said, that they were dropped from their label. Without it, they might not have made it to YouTube, where their fans were waiting to discover them. (RAPPLER: The nearness of YouTube)

.@KOlusola you are incredible. That was so moving. Everyone just kind of sat in awe. @PTXofficial pic.twitter.com/rIqcZ7ccEI

Together, Pentatonix is a force to be reckoned with, and individually, each member brings something completely unique to the table.

Pentatonix originally began with longtime friends Kirstie, Mitch, and Scott – then later adding Avi and Kevin, who was already doing his signature beatboxing and cello combination.

His solo with his cello was unforgettable. You don’t need much else when you have Kevin’s pipes, dexterity, and originality.

4. Down to the crowd Could they have endeared themselves more to the crowd than when they ventured down from the stage to share a moment with them during “Four Five Seconds”?

And by the way, not once did they sound winded, lose rhythm, or go out of tune. What would you do if you found Scott Hoying or Avi Kaplan on your lap? One lucky fan, plucked from the audience, found out. (WATCH: Pentatonix serenades PH fan onstage at Manila concert) 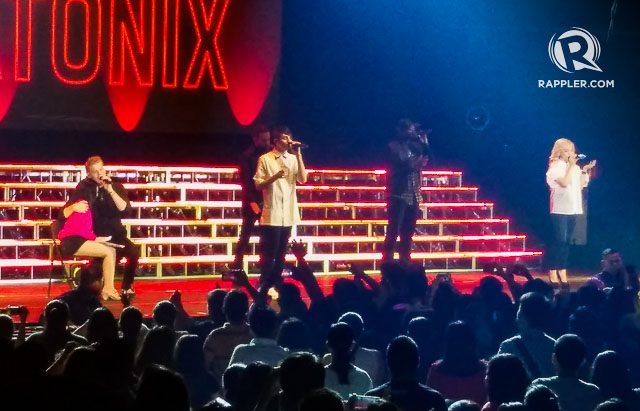 It wouldn’t be Pentatonix without a pitch perfect song for the moment – and they chose Marvin Gaye’s “Let’s Get It On.”

Throughout the show, small moments of closeness between the members kept the carefully arranged songs, the choreographed performances, from any feeling of distance or detachment. A high five between Avi and Kevin, clasped hands here and there, the way they made room for each other onstage – you were watching friends who knew the way each other moved.

It’s something judge Shawn Stockton observed way back when they were still competing on The Sing-Off. After an excellent performance of Florence and the Machine’s “Dog Days Are Over,” he remarked that band members set each other up for each other to shine. “That was so ingenious, the way you guys were just able to give Mich his moment,” he said of Michs’s high note. You see the same thing, 4 years later. Pentatonix might have made waves with their covers, but their originals were beautifully placed in the set list – and fans sang along with those just as much as they did the covers.

Stepping up to the plate, Avi asked everyone to light the Coliseum with their smartphones – a common concert move we’ve often seen – before launching into “Standing By.”

“I counted the stars tonight, / Oh how they shine so bright, / I gather them all, so we perfectly align / While we gaze from far away,” he sang.

.@PTXofficial no mics. No projector behind em. Just pure emotion and talent, and all our love. pic.twitter.com/NIoyYe5gax

The thing one must understand is that Araneta Coliseum, without exaggeration, shook under the weight of fans raring to show the singers how much they loved them. But once the group came back to the stage and explained they needed quiet to fully sing their Christmas tune without microphones, everyone complied.

You could hear a pin drop as all 5 huddled together to sing a slow, stirring “That’s Christmas To Me.” Fitting, because they are a gift. Earlier in their press conference with Philippine media, the group mentioned being excited to hear Pinoys sing – and they put us, the audience, to the test. (WATCH: Manila crowd sings with Pentatonix at PH concert)

Mitch took charge of the middle, Kirstie the left side, and Scott the right, teaching everyone a different part of the song. They launched into it after a very brief rehearsal – click here to watch the full video.

But the most feels-inducing moment came much later, when fans waited for Pentatonix’s encore. In what felt like a purely spontaneous moment, the crowd broke into song – the very parts that were just taught, in a bid to get them to come onstage again.

10. The buildup to Daft Punk

One of the best things about Pentatonix is that they’re able to use but also move past classic a cappella techniques and develop a very modern sound, able to make themselves skip forward and back, speed up and slow down in a blink. And there’s no more complex, intoxicating number than their Daft Punk medley to show off just that.

It’s no wonder they saved it for their final song in the small encore set. It’s what Mitch and Kirstie themselves had earlier proclaimed their personal favorites. This is a Grammy-winning arrangement, the one that put them most indelibly on the map.

Earlier, Avi told reporters that more than the reviews, what mattered to them was how fans felt about their work. (WATCH: 8 awesome Pentatonix facts)

“At the end of the day, I think that what’s really important to us is how our fans feel. And if they leave the concert feeling inspired, feeling happy, feeling uplifted, then we’ve done our job…we’re always just trying to make ourselves better, regardless of what other people say,” he said.

Outside after the show, people could be heard randomly singing aloud, the same few notes the group had earlier taught the crowd, preserving the high, the melody in their heads – and proving that PTX had indeed succeeded. – Rappler.com