Facebook Twitter Copy URL
Copied
'Now that I am sailing my own ship I’m a lot more confident in the music I am bringing into the world,' Cody says

MANILA, Philippines – YouTube sparked the ex-bedroom artist Cody Simpson’s meteoric rise, and he had since crossed paths with some of the biggest names in music, like Justin Bieber and Ziggy Marley. For 5 years, he was signed to major record label, Atlantic Records.

He took a big gamble by going indie and starting anew.

Cody Simpson is bravely embracing his newfound liberation, and he can’t wait to show this to audiences and listeners across the world with his upcoming record, Free.

Unshackling himself from big-label honcho demands, Cody has eschewed a teenybopper past and has confidently turned the right way at the proverbial fork in the road. Unfazed by new challenges, he even formed his own record label, Coast House/Bananabeat.

Free evokes a breezy but edgy soundscape. The singles that have so far been released has hints of his songwriting idols, Bob Dylan, Jack Johnson, Neil Young, and John Mayer (the last of which gave some indispensable input.) Even Miley Cyrus also shown her approval by snapping the cover art for “Flower.”

This coming August 12, he wants to show Manila some rock ‘n’ roll.

Cody speaks to Rappler via email about the creative freedom he has enjoyed working on Free. He talks about notable collaborations on the album, including soliciting some much-needed advice from John Mayer.

He also talks about looking up to prominent activist and singer-songwriter, Neil Young – he says it’s his dream to be able to work with him one day. Inspired by the veteran’s concept album The Monsanto Years, Cody hopes to push his overhaul further – using his own songs to incite social change.

“It feels amazing, and yes it is titled aptly so. Now that I am sailing my own ship I’m a lot more confident in the music I am bringing into the world. It’s a lot more of myself. You’ll hear it when Free arrives.

“I wrote and co-wrote all of the songs with an incredible producer named Cisco Adler. The two of us bunkered into the studio for a month and just created what felt natural to us. It’s very organic with all live instrumentation.

“Cisco and I just clicked. We met one day in Malibu and within a week had already cut a few songs that will be featured on the album. He’s a great dude who is super talented. Happy to have worked with him on Free.”

Current and dream collaborations, and sounding out with John Mayer

“These are artists I’ve been a fan of for a long time. It meant a lot that they took time out of their schedules to come and jam in the studio. G-Love, Donnavon, Cisco and all the live musicians who helped play on the record are incredible.

“I ran into John at a restaurant in LA one night and asked him if I could email him some of my new music. He was very gracious to send back advice and give me some excellent pointers.

“I really hope to work with Neil Young. He’s putting out a protest album this year on the topic of GMOs. That really inspired me to create music to evoke change.”

On running his very own record label, Coast House/Bananaboat

“It has been an interesting experience for my team and me. It’s a lot more work than we imagined, but in the end all very rewarding. Luckily I have surrounded myself with some very intelligent blokes who are taking care of everything.” 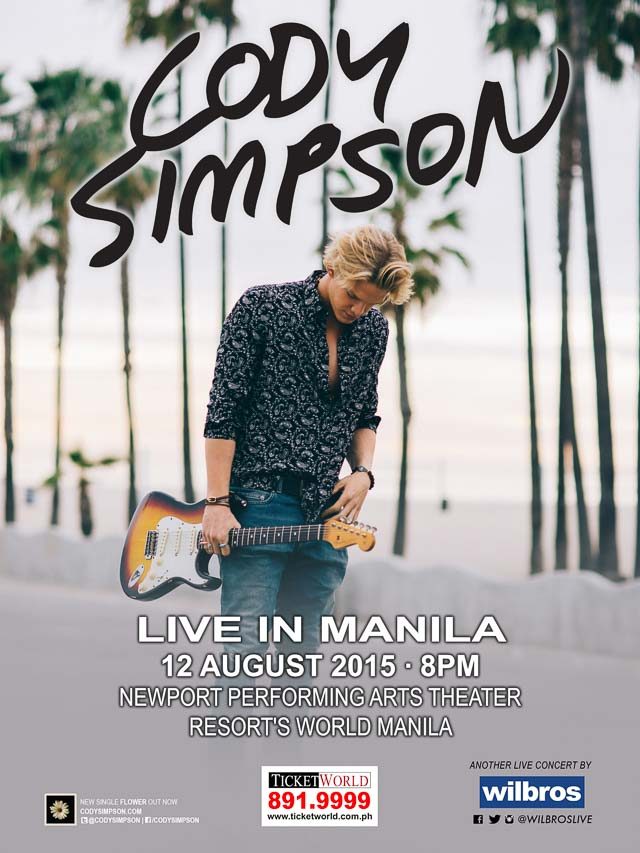 Cody will play in the Philippines on August 12. Rappler is a media partner. Click here for tickets.