WATCH: Taylor Swift crashes ex’s wedding in ‘I Bet You Think About Me’ music video 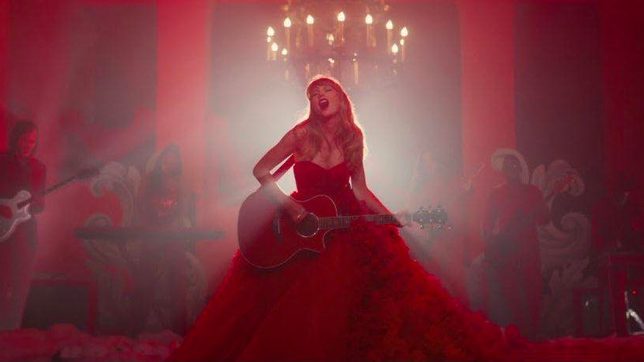 RED. Taylor Swift releases music video for 'I Bet You Think About Me'

Taylor Swift continues to surprise fans with the amount of content she prepared for Red (Taylor’s Version) as she released the music video for “I Bet You Think About Me” on Monday, November 15.

The “I Bet You Think About Me” music video stars Miles Teller as Swift’s ex, who is set to get married to another woman, played by Teller’s real wife, Keleigh Sperry. Swift then crashes the ceremony as she performs the song, ruins the wedding cake, and plays with the guests, while her ex reminisces about their failed relationship.

Serving as actress Blake Lively’s directorial debut, the six-minute clip dramatizes one of the singer’s “From The Vault” tracks that didn’t make it to Swift’s original 2012 album.

“The reddest video EVER is out now. Directed by [Blake Lively] who SMASHED it just like I smashed this cake,” Swift said in a tweet.

Swift collaborated with country singer Chris Stapleston for “I Bet You Think About Me.” It’s one of the six new songs featured in Swift’s 30-track Red (Taylor’s Version), which was released on Friday, November 12.

The new video is the second video from the album, following the Saturday, November 13 release of the short film for the 10-minute version of the track “All Too Well.”

Swift embarked on her goal to remake six of her studio albums, starting with the 2008 record Fearless up to 2017’s Reputation.

The singer-songwriter revealed that she does not legally own the masters of these records as per a contract with label Big Machine Records. After her contract ended, she signed with Universal Music Group, which granted her ownership over her future releases. – Rappler.com