Miss Universe 2015 predictions: Who will win the crown? MANILA, Philippines – And so we come to the one most important beauty pageant of them all – Miss Universe. This year, the 80 candidates – just like in previous editions – are fighting tooth and nail to make it to the top. Maybe not in the literal sense, but in a parallel approach using their solid arsenals of face, figure, and poise all wrapped in a package ready to get on the good side of the judges and brand-new owners.

During the Presentation Show at The Axis, they gave us a substantial preview of their full worth, which gave everyone – including your blogger – a clearer sense of who deserves to be up there and which among them could be eyeing the 64th crown with such fierce hold and intensity that will leave the weaker competitors settling for the crumbs of success.

And so, I present to you now my Top 15 (there will be a Top 15 indeed and not just Top 10 as previously rumored) based on their preliminary performances plus overall impressions since Day 1: 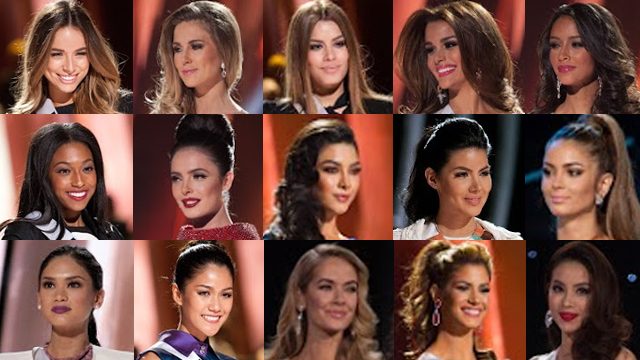 Coming up with 15 from 80 is truly mind-blowing. And to sacrifice a number of delegates who could also make it to the first cut makes me feel a certain degree of sadness because I know that each one of them gave it their absolute best. So let me just cite the representatives of Belgium, Chile, Indonesia, Russia and Georgia for completing a Top 20 if that were the wishful case.

From the 15, removing 5 lessens the pressure a bit in order for my final Top 10 to be highlighted. In reverse order, I removed Kosovo, Haiti, Australia, Mexico and Thailand. This left me with a satisfactory selection of finalists moving up one step closer to the crown. The entries from Colombia, Dominican Republic, Philippines, Vietnam, and USA remain within striking distance of the DIC crown. This in spite of France, Peru, and Paraguay still holding on tight for a share in the ultimate spotlight.

I favored my Final 5 with such firmness. Regardless of whether they will put on the best fight of their lives up to this point, I now pledge the magic circle to Ariadna Gutiérrez of Colombia, Clarissa Molina of the Dominican Republic, Pia Alonzo Wurtzbach of the Philippines, Pham Huong of Vietnam and Olivia Jordan of the USA. I believe that this is a preferable slate over other combos. Not knowing how the fateful turn of events will actually unfold holds me back a little. But I need to rank them now based on Final Look:

My Final Ranking of Miss Universe 2015:

Believe me when I say that I earnestly want Pia Alonzo Wurtzbach to win our country’s 3rd Miss Universe title. It’s long overdue. But if the two Latinas from the Dominican Republic and Colombia keep on presenting themselves with raging fire, then I won’t be forlorn getting the 2nd Runner-Up spot which has surprisingly remained elusive to the Philippines ever since.

My wish is for the Philippines to bring it on so strong and leave the other fighters in her court. And that doesn’t seem to be an impossible dream. Pia can still be it. And the final Q&A might just be the clincher.

Looking forward to a fantastic show, I remain humbly yours for Miss Universe 2015. – Rappler.com

Norman Tinio started pageant-blogging back in 2009 but has already been an avid pageant enthusiast since the early 70s. Apart from that, he is an industrial psychologist by profession, movie addict by nocturnal choice, and an ex-seminarian who can pray in Ancient Latin. You can always find him and his daily musings at normannorman.com.