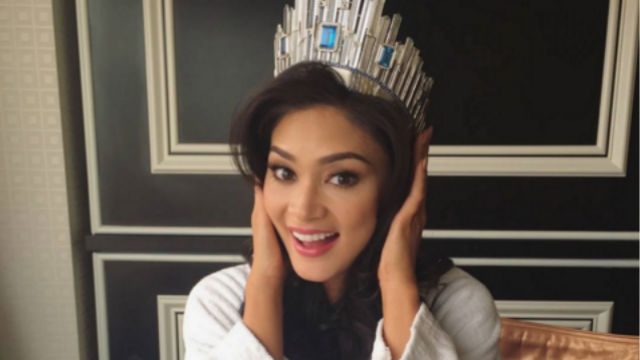 After her win, Pia’s coach, Mark Bessie Besana posted a video on Facebook. “Hi mga Pianatics, it’s me, Miss Universe, Pia Alonzo Wurtzbach from the Philippines! Nanalo na tayo (we won already), finally. Thank you so much sa lahat ng support niyo (all of your support) and I can’t wait to see you guys, thank you,” said Pia, before blowing kisses to the camera. “I can’t wait to share my victory with my countrymen. Mabuhay ang Pilipinas,” she told the media backstage after the pageant.

On Tuesday, December 22, Pia posted a message on her Instagram account, saying, “42 years of drought and now it finally reigns.”

Wurtzbach was visibly shocked when the “correction” in the announcement was made. She was then crowned by Miss Universe 2014, Colombia’s Paulina Vega.

She now follows in the footsteps of Filipina Miss Universe winners Gloria Diaz (1969) and Margarita Moran (1973) – ending a 42-year drought for the Philippines in the prestigious pageant.

It has been a long journey for Wurtzbach, 26, before her winning moment. The Filipina beauty queen represented the country in the global contest after her third attempt in joining the Binibining Pilipinas beauty pageant.

During the final question and answer round – in which the top three contestants were asked the question, “why should you be the next Miss Universe?,” this was her answer: “I want to show the world – the universe rather – that I am confidently beautiful with a heart.”

In the previous question and answer round, she was asked by host Harvey a politically-loaded question: does she approve of the US having military presence in her home country?

In her answer, she said she would welcome their presence, citing the “good” relationship between the two countries.

The day before the coronation night, Pia sent out a message to her supporters, acknowledging her 3 attempts to win the crown.

She wrote, “I hope I inspired you. Never give up on your dreams and believe that dreams do come true! Walang susuko! Ang Pilipino, palaban. (No giving up! The Filipino is a fighter.)“

The pageant, held at the Planet Hollywood resort in Las Vegas, is the 64th edition of the annual global competition. – KD Suarez and Vernise Tantuco / Rappler.com