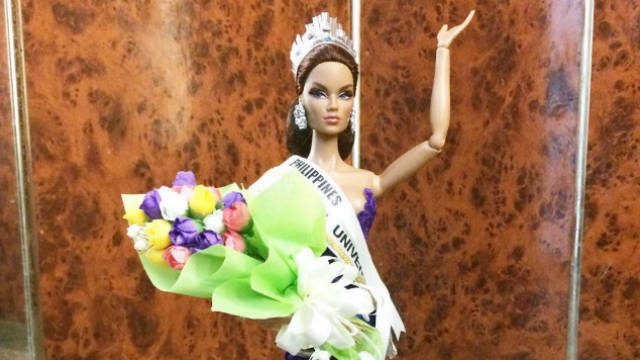 MANILA, Philippines  (UPDATED) – Miss Universe 2015 Pia Wurtzbach has been immortalized as a doll by two of her Filipino fans.

On Sunday, December 27, Ian Mendajar, one of Pia’s avid followers, posted an Instagram photo of a doll wearing a blue gown and the Miss Universe crown, similar to Pia’s outfit when she won the title on Sunday, December 20 in Las Vegas.

@piawurtzbach gave me and all the Filipinos the best Christmas gift after winning the Miss Universe 2015 title and now its my time to give her a Christmas gift… Hello Universe! Please welcome MISS UNIVERSE DOLL  a doll version of Miss Universe 2015 Pia Alonzo Wurtzbach wearing an @albertandrada creation (amazing creation) made by me This is actually my 4th Pia Doll. I hope you like it. Merry Christmas  #PiaDoll #MissUniverseDoll #missuniverse2015

Ian has previously made 3 dolls of Pia. First, when she won the title of Miss Universe Philippines last March, followed by a doll wearing her national costume during the Binibining Pilipinas competition, and another doll dressed in a gown similar to what Pia wore during the Star Magic Ball last September.

Now I have 2 Pia dolls

Its Miss Universe season again. I think this is the reason why my friend @mcriselda16 ordered a doll version of Miss Universe 2012 1st runnerup, Janine Mari Tugonon @tugononjanine  #missuniversedoll PS: Hi JT we know that you're here  welcome back and enjoy

Hello beautiful people all around the Globe  here is my Doll Version of our Miss Globe 2015 @anncolis on her National Costume. An amazing creation of Mr. @john_clivan from the Philippines!  #labANNPilipinas #missglobe2015 #AnnColisDoll

Meanwhile another fan, Oscar Antonio, also shared his version of Pia dolls. The first doll wore a red gown similar to the Oliver Tolentino gown Pia wore in the preliminaries, while the other doll was dressed in a blue gown and the Miss Universe crown.

Aside from Pia, Oscar also made a replica of Miss Universe 2014 Paulina Vega and 2007 Miss Universe Riyo Mori. He previously made a group of dolls representing the top 3 beauty titles in the world.

Aside from these dolls, Pia was sketched by Disney artist Jimmy Mulligan as a Disney princess last December 23.  – Rappler.com