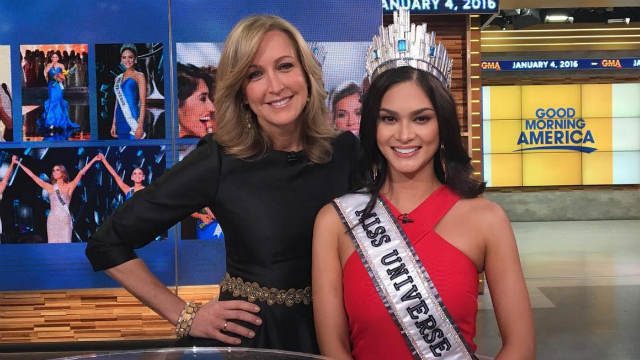 Facebook Twitter Copy URL
Copied
(UPDATED) Pia talks about the controversial announcement mix-up, speaking to Miss Colombia after the pageant, and her thoughts on sharing the crown

Pia said she still finds her historic triumph surreal, but added, “I’m so happy. I’m so excited, I can’t wait to start my reign.”

She said she got in touch with Miss Colombia Ariadna Gutierrez, who was mistakenly crowned on December 20 because of host Steve Harvey’s mix up. Pia said Ariadna seemed to be doing well when she greeted her on her birthday on December 25.

“I understand how she feels, I’m also concerned [about] her. And I know that she’s a beautiful young lady, very talented, and I think that she’ll have a lot of other opportunities. She’ll do very well I’m sure,” Pia said.

She also gave a message for Ariadna’s fans who have criticized her in their social media posts.

“I understand what they feel, because of course they want their bet to win. So that’s completely understandable. If it [were] the other way around, I’m sure the Filipinos would also feel a little bit disappointed with the results,” she added.

Pia dismissed a suggestion made by US presidential candidate Donald Trump that she and Ariadna can share the crown.

“I think it would be a little bit difficult for two girls to share a crown. But I have high hopes this will give great opportunities for me and Miss Colombia, and the rest of the candidates,” she said.

She added she would love to be the next Bond girl but she will have to focus on her duties as Miss Universe.

Aside from raising awareness on HIV/AIDS as she vowed during the question and answer portion of the pagent, Pia said she also wants to raise awareness about relief operations for calamity-stricken areas and cyberbullying.

As for wearing the crown, Pia quipped: “It’s a little bit heavy, I’m not complaining. It can stay there for a long time.”

Here are some photos and behind the scenes from Pia’s visit to the show, where she was interviewed by Lara Spencer.

Coming up on @GMA exclusively, I'm joined by the lovely @MissUniverse pic.twitter.com/SGEb9xfvmQ

So excited to be on-set at @goodmorningamerica with @laraspencerabc. Tune in between 7:30-8:00am EST to catch me. -Pia

Who caught my segment this morning on @goodmorningamerica? #MissUniverse -Pia

I'm ready to take on the day! Getting hair and makeup done by my glam squad this morning for @GoodMorningAmerica! Tune In to watch starting at 7:30am EST. #-Pia

Pia also guested on LIVE with Kelly and Michael, where she met actor Samuel Jackson and The Bachelor‘s Ben Higgins. She was also given the opportunity do the Miss Universe walk on the show.

I'm such a huge fan of @samuelljackson. # I can't believe I had the opportunity to meet one of my favorite actors during LIVE with @kellyandmichael. -Pia

What an exhilarating experience it was to be on LIVE with @kellyandmichael. #MissUniverse -Pia

Backstage waiting to go on LIVE with @kellyandmichael. Tune in now to @abcnetwork. # -Pia

Other appearances include Inside Edition, where she showed her New York apartment, Extra, Access Hollywood, where she met actress Eva Longoria, Nightline, and Entertainment Tonight.

Some behind the scenes action of @piawurtzbach on @extratv. If you're walking by Times Square, you can see Pia on the jumbotron with host @ajcalloway.

The sweet and hilarious @evalongoria right when she spontaneously joined my interview at @AccessHollywood. # Fun fact: Eva was Miss Corpus Christi 1998! -Pia

Just had my interview with @entertainmenttonight. I got to sit down with @nischelleturner who also happened to be a Prelim judge during #MissUniverse. -Pia

Get a peak inside of my New York apartment on @InsideEdition. Come check it out! -Pia

The day's not over yet! Make sure to catch my @nightline interview with @jujuchangabc on @abcnetwork tonight at 12:30am EST. -Pia

Tonight on #Nightline Pia Alonzo Wurtzbach aka @missuniverse joins @jujuchangabc – tune in at 12:35am ET [ @taylormdunn ]

What do you think of what Pia Wurtzbach had to say during her first interview as Miss Universe? Let us know in the comments! – Rappler.com