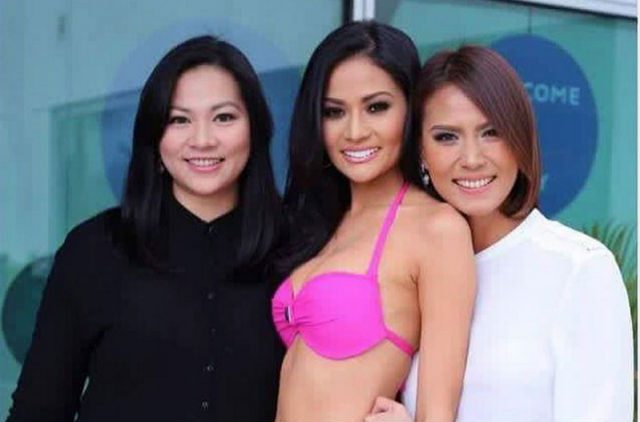 MANILA, Philippines – Candidate 28 Nichole Marie Manalo is one of the most popular ladies in this year’s batch of Binibining Pilipinas 2016 hopefuls. Although she has many fans, she has two supporters who have been behind her all her life – sisters Kate and Bianca Manalo, who are beauty queen title holders as well. During an interview with members of the press last March 29, Bianca, who represented the country in Miss Universe 2009 in the Bahamas talked about her sister’s second try. Nichole first competed in 2014.

“She doesn’t have to ask permission. But she informed us and of course we’re happy for her. It’s her dream so all we could do is support her all the way,” she said.

Kate, who competed in Miss World 2002, said “I help her (Nichole) train but she has other mentors also,” referring to the camp Kagandahang Flores, the beauty camp Nichole is part of.

Both Kate and Bianca agree that it does not matter what title Nichole gets. Aside from Kate and Bianca, their aunt Nenita Ramos is also a title-holder, being Bb Pilipinas International 1968.

“It doesn’t really matter which crown she gets. I mean each of the titles, each of the crowns has its own platform and at the end of the day if ever she wins any of the titles, it gives her na opportunity to promote her cause,” Bianca said.

For Kate, one thing she saw in Nichole now is that she’s a better person.

“Actually now Nichole is now fiercer and better. I personally know, I get to spend time with her for her training, I know she’ll give it her all. So win or lose, of course it will matter [if she loses] but there will be no regrets because she gave it her all. And my advice to her was just to really have fun and be herself. Because she’s not only doing this for herself but for her family and eventually the country if ever she wins a title,” Kate said.

Bianca meanwhile said: “I just told her to enjoy every moment and relax. Just have fun. kasi when you’re relaxed, it would show your confidence, everything. When you just portray yourself , you will shine brightly eventually.”

In an interview with Coconuts Manila, Nichole said that one of the reasons she decided to try again was because of Pia Wurtzbach’s success in the pageant. Fans will remember that Pia was also part of the 2014 season, and she tried 3 times before finally winning the right to represent the Philippines at the Miss Universe pageant.

(If Pia did not give up, why should I give up? So I tried again)

(I remembered, right after Binibining Pilipinas 2014 pageant, there were 3 of us in the dressing room. All of us were sad…I told her ‘try again.’ She told me that she was already tired. But she tried again, so why can’t I?)

The pageant’s coronation night will be on Sunday, April 17 at the Smart Araneta Coliseum. Pia, who returned to Manila Wednesday, April 13, will crown her successor along with fellow Bb Pilipinas title-holders – Janicel Lubina, Rogelie Catacutan, Christi Lynn McGarry, and Ann Colis to this year’s winners. – Rappler.com