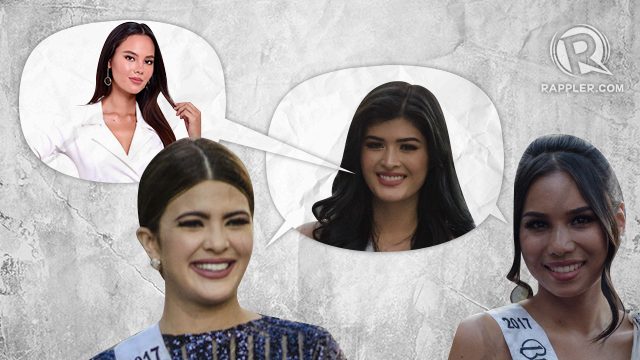 MANILA, Philippines – Two of Mariel de Leon’s fellow Binibining Pilipinas queens came to her defense after netizens continue to criticize her over a remark made during a TV special.

On Sunday, March 11, during the Road to the Crown special, all of the candidates were seen undergoing a speech workshop.

During the turn of candidate 20 Catriona Gray, Mariel told her: “I really love your confidence and the way you speak. But sometimes it’s a just tiny bit scripted.”

Catriona is considered as one of the heavy favorites to win a title in this year’s competition.

The Bb Pilipinas International titleholder’s remark did not sit well with Catriona’s fans and supporters who called her out on social media, accusing her for being arrogant and a know it all.

Mariel defended herself, saying that there is a difference between constructive criticism and bashing.

And yes, there is a difference between constructive criticism (to help someone grow) and bashing.

On Monday, March 12, fellow beauty queen Katarina Rodriguez and Elizabeth Clenci took to their respective social media accounts to speak up on the issue, saying that Mariel was not harsh in giving criticism to Catriona.

On Twitter, Katarina, who placed 1st runner-up in the Miss Intercontinental pageant in Egypt last January said: “I reviewed what she (Mariel) commented on towards Catriona and she did not insult Catriona, she did not speak of her in any offensive manner, and please take it from someone who knows Mariel, she would not want to bring any person down.”

Katarina also said that she’s saddened that many are critcizing Mariel for the wrong reason and reminded everyone that pageants are supposed to be fun.

“Please remember if you have nothing nice to say, say nothing at all. She is my friend and I will defend her.  You don’t need to like Mariel, but  at least respect her. Yung intentions niya ay hindi naman masama (Her intentions mean no harm).”

“Pageantry is supposed to be fun and exciting, not demeaning or hurtful. Let’s keep the peace please! Let’s love all our queens and all our candidates.”

Hi everyone, let’s remember to keep kindness and peace especially in something that should be fun for us all. pic.twitter.com/fxh4ywvGtv

Elizabeth Clenci, Miss Grand International 2nd runner-up also defended Mariel on the issue. In her Instagram stories, Liz said that while social media has given everyone a platform to speak, it should also have boundaries and respect.

“All the girls were given constructive criticism by all of us during the activity in Bataan. In the past year, I have gotten to know Mariel and she is the most kind hearted, sweet soul you will meet. I don’t get involved in too much but when I see something is out of line, especially regarding someone who is important to me,  then have to speak up,” Liz said.

Liz said that regardless if they know the person or not, it is still inappropriate  to use nasty words to put down. She also appealed to the fans to be calm.

“Please guys, I know how incredible and passionate you are as fans but let’s show the world we can be passionate fains in a POSITIVE way.” Mariel thanked Katarina and Liz for defending her.

Sisters have each other’s backs. Catriona also issued a statement to her fans, calling them stop bashing Mariel on the issue.

“I’ve also noticed that alot of you have taken a comment given to me during the show in a negative way.

“Firstly, any advice from our queens is valuable to us Binibinis and I took all of those given to me, in a very constructive way!  I always have something to learn and improve on, that’s why one of my greatest passions is education!!

“Secondly, everyone is entitled to their opinion and although at times you may not favor it, it doesn’t give a good reason to turn around and try to hurt others through bullying or bashing.

“Be passionate, but be mindful. Let’s cultivate an environment, not just in beauty pageants but in society in general, where we argue like we’re right but listen like we’re wrong. Debate is healthy, bashing is not,” Catriona said.

Catriona, who was crowned as Miss World Philippines 2016, hopes to be one of the 6 winners on Sunday, March 18 during the coronation night at the Smart Araneta Coliseum. – Rappler.com