Facebook Twitter Copy URL
Copied
From the terno to sarimanok, here's a roundup of the national costumes of the Philippines from 1999 to 2017

MANILA, Philippines – Miss Universe fever is on as candidates prepare to head to Bangkok, Thailand for the competition scheduled on December 17 (December 16 US time).

One of the most anticipated segments every year is the national costume. While a handful of candidates have already showed of their respective costumes, Miss Universe Philippines 2018 Catriona Gray has opted to keep it a secret – she’ll debut it at the competition itself. (IN PHOTOS: Miss Universe 2018 national costumes)

Through the years, the country’s representatives have often kept the national costume very traditional, picking either a Maria Clara or terno. Maricar Balagtas (2004) and Janine Tugonon (2012) were among those who decided take a different route. (A look back at memorable national costumes of Bb Pilipinas candidates)

From 2000-2014, many of the costumes were designed by Colombian fashion designer Alfredo Barraza. But after Mary Jean Lastimosa’s national costume in 2014 received criticism online, the Binibining Pilipinas Charities (Inc) opened doors again to Filipino designers, starting with Pia Wurtzbach, whose capiz terno by Albert Andrada got rave reviews.

Following Pia, representatives such as Maxine Medina and Rachel Peters took inspiration from different elements and concepts in Philippines culture – there’s the vinta by Rhett Eala (2016) and the Sarimanok (2017) by Val Taguba.

Here’s a quick look back at some of the national costumes of the Philippines that have been presented so far on the Miss Universe stage from 1999 to 2017: 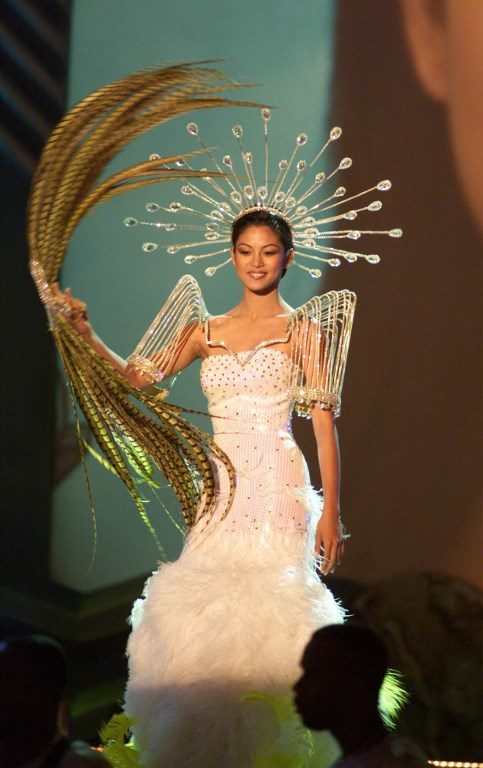