Miss Vietnam 2018: ’I was told to find a husband, but I had to follow my dreams’ 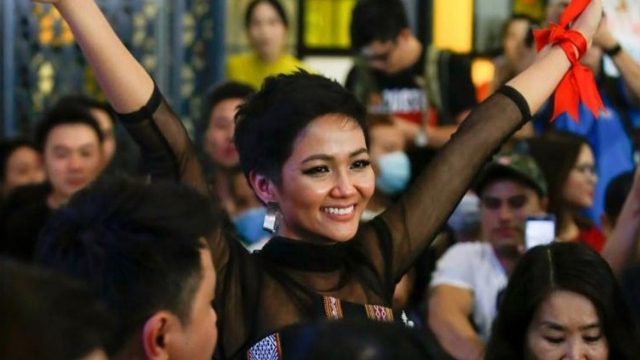 MANILA, Philippines – Miss Vietnam 2018 H’Hen Nie may not have won the Miss Universe crown, but she did win a lot of people’s hearts throughout the competition.

The beauty queen charmed viewers during the pageant’s coronation event on December 17 when she became the first candidate from Vietnam to make the pageant’s top 5 – the furthest any one from the country had ever gone in Miss Universe. (READ: Miss Vietnam’s Pinoy trainer talks about teaching the fan favorite)

During the coronation, she also notably diverged from the typical beauty queen uniform and rocked a pixie cut and a crop-top and pants ensemble.

More than her sartorial choices and even her top 5 finish however, it was her life story that truly inspired fans.

H’hen is part of the Rade people, an ethnic minority in Central Vietnam. She is one of 6 children of farmers, and, as she shared in a video posted by Miss Universe, her parents are still living in their hometown in rural Vietnam.

She shared that her parents wanted her to follow Rade custom and marry in her teens.

“At 14 years old my parents told me to find a husband. However I stated that I could not possibly get a husband at that point in time because I had to follow my dreams,” she said in her native language.

“I did not want to live a life where I had to marry early like many other kids had in my village,” she added.

She then went on to put herself through school, working as a domestic helper in Ho Chi Minh to earn money for college, where she studied economics.

After college, she started working as a model, and then found pageantry, eventually becoming the first ethnic minority to win Miss Universe Vietnam in 2018.

After winning the prestigious title, H’hen decided not to keep the prize money for herself. Instead, she decided to use it to support literacy.

“I opened a library deep in the countryside. It’s a friendly library that helps children to read,” she said.

I am an ethnic minority. I’m just to get married at 14 but no I chose education and from nothing – here I am. I can do it, you can do it. Thank you so much @missuniverse @missuniverse.in.th

H’hen will be doing the same for the money she earned from competing in Miss Universe.

According to a post on the official Instagram page of Miss Universe Vietnam, H’hen will be donating her entire Miss Universe earnings, which amount to 1 billion VND (approx US$43,000) to support her cause.

“She wants to complete her promise with her village to provide scholarships for poor students and complete her social project Room to Read.”

MISS H'HEN NIÊ DONATES HER ENTIRE 1 BILLION VND (~43 000 $ US) PRIZE FOR COMMUNITY ACTIVITIESAfter making history for Vietnam by reaching to the final Top 5 in Miss Universe 2018, H'Hen Nie has received a total 1-billion-VND (~43 000 $ US) prize from various sponsors as well as her managing company. She's decided to donate 100% of her prize for social activites. She wants to complete her promise with her village to provide scholarships for poor students and complete her social project Room to Read (build more libraries in rural areas, support schoolgirls around the world). Such an amazing act of her #MissUniverse #Vietnam #HHenNie