WATCH: Catriona Gray teaches you how to do the slow-mo turn 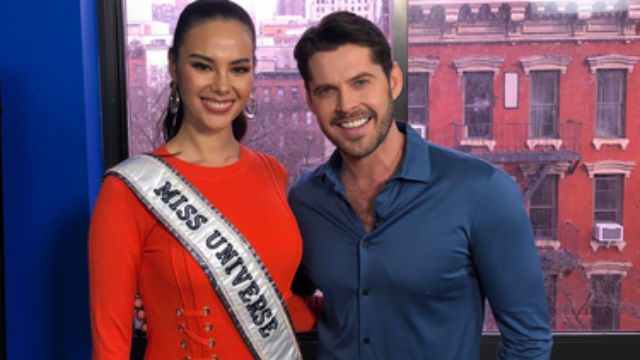 MANILA, Philippines – Miss Universe 2018 Catriona Gray’s slow-mo turn during the preliminary competition last December still continues to get attention and she has happily obliged to show it once again.

During her interview on Celebrity Page Network, which will air this week in the US, the Filipino-Australian titleholder gamely showed host Stephen Walker how to do the turn. Stephen clearly seemed to enjoy it.

It’s safe to say that our Stephen Walker learned a thing or two when @MissUniverse @catrionaelisa stopped by the office  #MissUniverse pic.twitter.com/vkWaE3AVP8

The newly crowned @MissUniverse @catrionaelisa stopped by and chatted with our Stephen Walker about becoming Miss Universe, chasing your dreams, and more!Thanks for stopping by, Miss Universe! #MissUniverse pic.twitter.com/RKWA3OIFXV

Stephen was clearly impressed by Catriona, posting on Instagram the video with the caption: [Catriona Gray] teaching me the slow mo Turn, view full lesson on my IGTV lol.”

Her appearance on Celebrity Network was one of the 6 interviews she did on day one of her media tour. She started her tour with appearances on Good Morning America and Live with Kelly and Ryan.

Ryan Seacrest took to Twitter after the interview saying: “A lot of #FilipinoPride in the audience today for @MissUniverse @Catrionaelisa! Maligayang bati sa inyong pagkapanalo!”

Catriona is set to make appearances on Good Day on Fox 5 and Build Series on AOL.com on Day 2 of her media tour, Tuesday, January 8, New York time. – Rappler.com