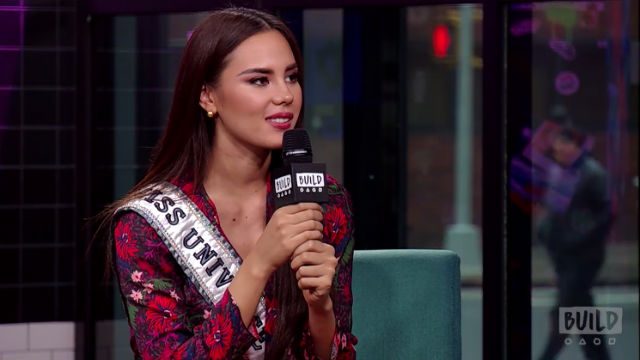 Facebook Twitter Copy URL
Copied
Catriona gets candid on topics ranging from criticism on pageants and the 'war' on social media – is she Filipino, Australian, both?

The interview, which ran for more than 27 minutes, is the longest and most in-depth she’s done since stepping into the Big Apple to begin her reign. She started her media tour on Monday, January 7, with appearances on Good Morning America and Live with Kelly and Ryan.

Media week started off strong for #MissUniverse 2018 @Catriona_Gray. If you were interviewing Catriona, what would you want to ask her?

She began her Tuesday tour with an interview on Good Day New York, where she got to  show a bit of her singing skills.

Here are excerpts of Catriona’s interview with Build Series and questions thrown to her by selected members of the audience.

Winning the national title vs the Miss Universe crown

Catriona: It’s so different. Because competing for Miss Philippines, I really feel I’m just a candidate. I’m not representing my country just yet. So when I get the honor of wearing a Philippines sash, I really want to embody every aspect. So even as Miss Philippines, in my wardrobe, I want to showcase the Filipino textiles, our fabrics, our silhouettes, symbolism, and I researched about our culture and our history. You know there was so much more weight into it. It wasn’t just I’m candidate number this. I am a Miss Philippines and this sash is not just lettering, it’s a country. (READ: Catriona Gray at Miss Universe 2018: Ambassador for PH culture, design)

On the ‘cohesion of cultures’ in her life

Catriona: I really feel that growing up in a cohesion of cultures really made me have an opened mind in how different cultures can be. The different traditions they carry, how it makes them affect, how they treat different people, how they go by their life, their values that are integrated into them. So I grew up with that with the best of both worlds. And I had the pleasure of traveling a lot in my life, so I think it really helped me to have an opened mind and to be more understanding and I think that one of the beauties of a competition like Miss Universe, where you get women from all over the world coming together…and it opens up the most interesting conversations. I think that’s a great thing.

Catriona: …I really feel that I am Miss Philippines. I feel like a Filipina, a Filipino woman. It just so happens that when I was growing up, it was very much in Australia and I think you can be both. I did grow up with those two sides of the world, if you would. And I just thought it was funny that there was almost a “war” – “No she’s ours! She’s practically a Miss Australia.” I am a Miss Philippines but I can’t blame them for being excited from feeling the high spirits. The role of social media

Catriona: First, I say the leap in followers was just…it took me by surprise, because I still feel the same girl from one year ago. You know, I don’t feel I have changed that much, but to see that I have this such platform now, with so many people listening to what I have to say, it really makes me want to orientate towards to something really educate people, to create awareness, to do something more than show them a cute outfit or what I’m having for lunch. But social media has definitely revolutionized or transformed the world of pageantry. Not just pageantry but any social cause that we would like to lend out voice to or how we informed each other, how we connect.

And that’s why I think it’s a powerful, powerful tool that really has the potential to do so much good. And as Miss Universe, I really want to utilize the tool to as I said educate, create awareness, draw people to causes that they might have not known about or connect to them in some ways and help see themselves that person or that cause. So yeah, I think social media is an amazing thing, if used the right way.

Catriona: I can totally see how some have a total negative perception of beauty pageants. But I feel that’s drawn from a certain surface perspective. They really don’t see the journeys of the girls or what they represent because these days, especially with the women I competed with in Miss Universe, the women I’ve talked to, they all have causes, they all have a bigger meaning for wanting to pursue Miss Universe. And it’s usually about the platform which is so amazing to see. because I think we’re also showing that women can also be multi-faceted…and I think when you really see what we’re trying to represent, what we’re trying to do in the platform of pageantry, that will kind of change some people’s perspective.

What pageants helped her develop

Catriona: If I had to develop anything as a candidate it was mental fortitude. Because to be bombarded in social media with both positive and negative comments, it was really hard to always have a thick-skin, because someone could say “hey just don’t worry what they say” but there are times that will get you or a comment would hurt. So it was really just building that mental fortitude that I had to do as a candidate and just remember why am I doing what I am doing.

Advice from her predecessors

Catriona: This piece of advice came was from Rachel Peters (Miss Universe Philippines 2017), who is my predecessor. She just told me take everyday as it comes. Because she told me you can get overwhelmed because it’s a high pressured environment. You know how much expectations is on you, but just take it day by day which you know it’s a simple advice, but I really did apply it throughout the pageant.

Catriona: Something that I really stay true to is what my values are and my uniqueness. For example, I am a very creative person so I interject to everything possible of my journey. I was really hands on my wardrobe, to how my final look was, my jewelry like everything. I was so hands on and I felt that when I walked out of that stage, no matter what happens, I knew and I felt comfortable, I felt as beautiful as I could be and I stay true to myself. I think that’s so important because in pageantry, there will be people who may just have the best intentions as mentors… but you need to have the final say. You need to feel comfortable. You need to feel like you and that will shine through.