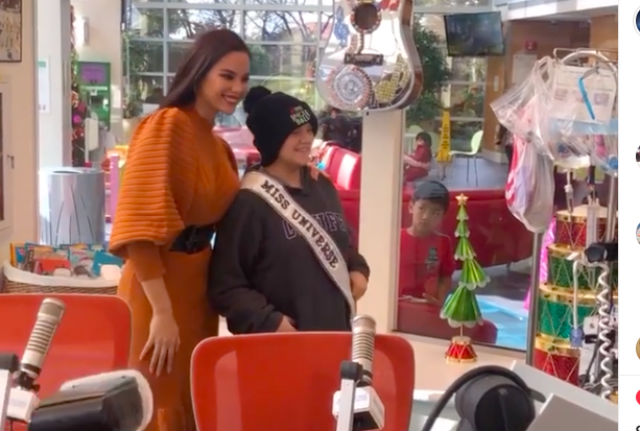 MANILA, Philippines – Days before she turns over the Miss Universe crown, Catriona Gray took time off to visit kids at the Children’s Healthcare of Atlanta.

The reigning Miss Universe was seen giving a toy and postcards, as well as sashing one of the patients during her visit.

Catriona also took time to visit the radio studio of The Ryan Seacrest Foundation in the hospital. The foundation, which has locations in hospitals across the United States, was established by TV and radio host Ryan Seacrest to help out kids through entertainment and media.

“Dropped by Children’s Healthcare of Atlanta and had a chat a the @ryanfoundation studio on site as well as popping into visit some of the children patients. Today was yet another reminder that life is such a blessing and should never be taken for granted. These children and their families are so, so strong and its moments like these that inspire me the most,” Catriona said.

Catriona is set to crown her successor on December 8 (December 9) at the Tyler Perry Studios in Atlanta. – Rappler.com