Spotlight: Why ‘He’s Into Her’ is a must-watch 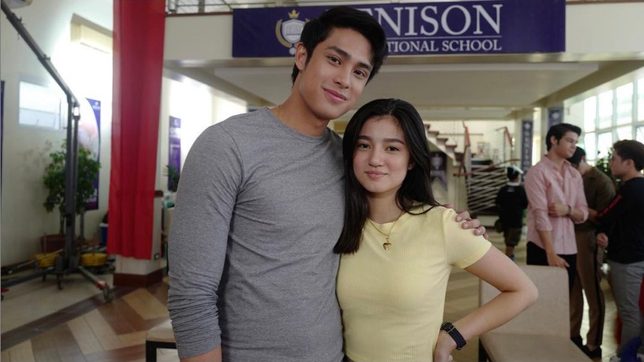 NEW SERIES. Donny Pangilinan plays Deib Enrile while Belle Mariano is Maxpein del Valle in the TV series adaptation of the novel 'He's Into Her.'

Facebook Twitter Copy URL
Copied
Get to know its cast, creators, and how the Wattpad hit is being adapted on-screen

After over two years since the 2019 cast announcement, fans are ecstatic now that He’s Into Her is finally on air. During its iWantTFC premiere on May 28, it received a “record-breaking high number of views” that also caused technical issues on the platform.

Since then, the web series has been released via Kapamilya Channel, Kapamilya Online Live, A2Z Channel 11 and has constantly topped the Philippines’ trending list.

Here’s why it’s well-loved by many:

He’s Into Her is based on a popular Wattpad novel

Originally published in 2013, He’s Into Her follows Maxpein Zin del Valle (played by Belle Mariano in the series), a girl from a small town who agrees to live with her wealthy father in Manila. She’s transferred into the Benison International School where she stands up against Deib Lohr Enrile (Donny Pangilinan), the school’s varsity captain.

The two start out as sworn enemies and even as their relationship grows, they do their best to outwit each other.

(I wasn’t expecting the support and love they’re giving my stories… Before, when I was starting, all I want is to have readers. I didn’t expect that I’ll receive this much support… The readers supported my story even until now that it has become a series).

Given the huge following of the novel, He’s Into Her writer Vanessa Valdez explained the need for these changes and assured fans that they still stuck to the essence of the story. “There are some things that are in the book that we can’t put on the screen,” she explained.

“There are some things we need to tweak that are palatable for the audience to make it more understandable. I’m thankful for the generosity that Maxine has extended to us because not every author will be as gracious and as generous as she has been,” Vanessa said during the show’s Grand Media Launch.

When Belle and Donny were first announced as the series’ leads in 2019, it drew mixed reactions from loyal readers of the book. But now that the adaptation is finally out, there’s no denying that they’re the perfect choices to play Max and Deib.

Belle admitted feeling pressure because it’s her first major lead starrer. “What scares me is, what if hindi ko ma-reach ‘yung expectations ng tao? (I didn’t reach the viewers’ expectations)?” she said during the media launch.

Belle said that the feisty Max is different from her past roles. “This is my first lead and challenged po ako kasi people know me as this sweet girly na girl but then this one mapapalabas ‘yung pagka-angkas ko and pagka-boyish ko. So there is pressure po talaga but I am driven to prove anyone na kaya kong gawin ‘tong role na ‘to,” she said.

(It’s challenging because people know me as sweet and girly, but for this one, it will show my tough side. There’s pressure but I am driven to prove anyone that I can do this role).

“Pero mas excited pa rin ako kasi natutunan kong magtiwala sa sarili ko, na kaya ko ‘to, na kaya ‘to ng buong cast. I will pull this off,” she added. (But I’m more excited because I learned to trust myself and the whole cast).

Both Belle and Donny admitted they were awkward around each other at first, since it was their first on-screen pairing. “Noong una, natakot akong lumapit sa kanya (At first, I was scared to approach him),” Belle said.

“Mas naging close kami (We grew closer)… We just focused on playing our characters and giving our viewers the best… I really felt that we are very much in the moment, we gave it all. We really took the time to support each other,” Donny said.

Belle said it was important for them to build a strong bond so they can establish their chemistry in the series. “I feel like to have a good chemistry, it’s really important na maganda ‘yung dynamics niyo together. Suportahan kayo. Kailangan kiligin ka talaga, doon magiging effective,” she said in a Star Magic Lounge interview.

(I feel like to have a good chemistry, it’s really important to have good dynamics together. Support each other. You have to really feel the kilig for it to be effective).

Donny echoed the sentiment, adding that sometimes, the strong emotions spill over even after they’re done filming a scene. “It doesn’t just one take, we have to like really be in the zone that it expands sometimes. You can bring in all your emotions,” he said.

Donny said that the huge fan base also meant added pressure but that “it’s a good pressure.”

“At the end of the day, we just want to give something that could inspire people and let them go through over a rollercoaster of emotions,” he said.

It features a new breed of rising stars

Aside from Belle and Donny, rising young artists are also in the cast of in He’s Into Her. Pinoy Big Brother alums Vivoree Esclito, Kaori Oinuma, Rhys Eugenio, Criza Taa, Ashley del Mundo and Rise Artists’ Jeremiah Lisbo and Joao Constancia are also part of the cast.

After being labeled as new stars to watch out for, Criza said it’s both a compliment and challenge. “Ang laking pressure pero sobrang nakakakilig, isa po siyang motivation na galingan pa lalo,” she said during the media launch. (It’s a huge pressure but it’s a nice feeling. It motivates us to do better).

Director Chad Vidanes said he’s in awe of the work the cast has been putting into the series. For most of its stars, He’s Into Her is their first big project.

“They always ask me the in-depth of the characters. They read between the lines. Hindi lang siya memorize ng lines, kita mo talaga ‘yung passion at dedication nila sa art, (They don’t just memorize. You really can see how passionate and dedicated they are for this craft,” he said of his young cast.

Maxine recalled writing the novel eight years ago – which is also why they had to make some changes to make sure that the series makes sense in 2021.

And while the series is about young people, Vannessa said even older viewers will appreciate and understand the series. “We had to write in a way na even if you don’t speak the language, maiintindihan mo pa rin ‘yung show (you’ll still understand the show). The show is not just for young people, it’s for everyone. Hindi siya alienating to the older generation (It’s not alienating for the older generation),” she said.

Director Chad added, “We make sure that even if they have their language from time to time, the general public can understand it and read between the lines.” – Rappler.com

New episodes of He’s Into Her are released every Friday, 8:45 pm, on the iWantTFC website and mobile app. The show also airs Sundays at 8:45 pm on the Kapamilya Channel, Kapamilya Online Live, A2Z Channel 11, and TFC.