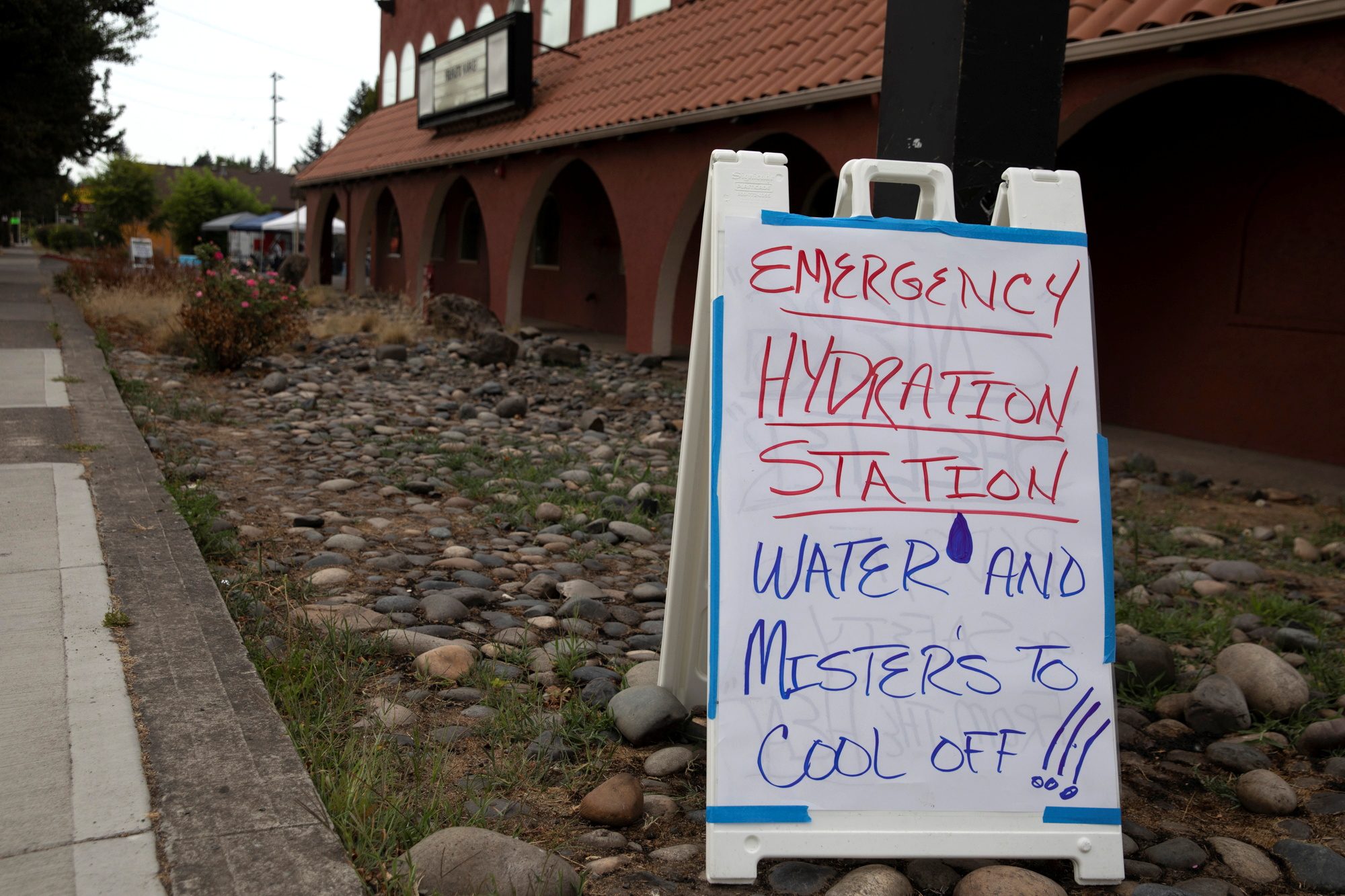 SIGN. Sunrise Center is set up as a cooling station as a heat wave hits the Pacific Northwest in Portland, Oregon, US, July 30, 2021.

Facebook Twitter Copy URL
Copied
'The heat wave in Canada, fires in California, floods in Germany, floods in China, droughts in central Brazil make it very, very clear that climate extremes are having a very heavy toll,' says Paulo Artaxo, a lead author of the report

Extreme heat waves that previously only struck once every 50 years are now expected to happen once per decade because of global warming, while downpours and droughts have also become more frequent, a UN climate science report said on Monday, August 9.

The report found that we are already experiencing those effects of climate change, as the planet has surpassed more than 1 degree Celsius in average warming. Heat waves, droughts, and torrential rains are only set to become more frequent and extreme as the earth warms further.

It is the first time that the UN Intergovernmental Panel on Climate Change (IPCC) has quantified the likelihood of these extreme events in a wide variety of scenarios.

“As the IPCC makes plain, the impacts of the climate crisis, from extreme heat to wildfires to intense rainfall and flooding, will only continue to intensify unless we choose another course for ourselves and generations to come,” US Special Presidential Envoy for Climate John Kerry said.

The report found that once-in-a-decade heavy rain events are now 1.3 times more likely and 6.7% wetter, compared with the 50 years up to 1900 when major human-driven warming started to occur.

Previously once-in-a-decade droughts could happen every five or six years.

To save the planet, focus on cutting methane – UN climate report Scientists emphasized that these effects of climate change are already here, with events like the heat wave in the US Pacific Northwest killing hundreds in June and Brazil currently experiencing its worst drought in 91 years.

“The heat wave in Canada, fires in California, floods in Germany, floods in China, droughts in central Brazil make it very, very clear that climate extremes are having a very heavy toll,” said Paulo Artaxo, a lead author of the report and an environmental physicist and the University of Sao Paulo.

Heat waves show stronger increases in frequency with warming than all other extreme events. Twice in a century heat waves could happen roughly every six years with 1.5 degrees Celsius of warming, a level which the report says could be surpassed within two decades.

Should the world become 4 degrees Celsius hotter, as could happen in a high-emissions scenario, those heat waves would happen every one to two years.

Carolina Vera, another report author and a physical climate scientist at University of Buenos Aires and Argentina’s main agency for science research (CONICET), said there is also an increasing likelihood that multiple extreme weather events could happen at the same time.

For example, extreme heat, drought, and high winds – conditions that could feed wildfires – are more likely to happen at the same time.

The IPCC has a medium or high-level confidence that many important agricultural regions around the world will see more droughts or extreme rain. That includes parts of Argentina, Paraguay, Bolivia, and Brazil that are major growers of soybeans and other global commodities.

“It is scary, sure, with the risk that fires, heat waves, droughts will affect humans in the form of weather and food insecurity, energy insecurity, water quality, and health – mainly in poor regions,” said Jose Marengo, a climatologist at the Brazilian Science Ministry’s disaster monitoring center.

Marengo was a review editor for the IPCC report’s chapter on human influence on the climate system.

For example, regions that are already prone to drought are likely to experience them more frequently, including in the Mediterranean, southern Australia, and western North America, said Friederike Otto, IPCC author and climatologist at University of Oxford.

Increased frequency of drought and heavy rain also are not mutually exclusive and are predicted in places like Southern Africa, she said.

“If we stabilize at 1.5 degrees, we can stop them from getting much worse,” Otto said. – Rappler.com