PROTEST. Climate change activists gather to protest outside of BlackRock headquarters ahead of the 2021 United Nations Climate Change Conference (COP26), in San Francisco, California, US, October 29, 2021.

Facebook Twitter Copy URL
Copied
UN chief Antonio Guterres says that while the clutch of recent climate announcements may 'leave the impression of a rosier picture.... unfortunately, this is an illusion'

Reluctance among major carbon polluters, including China, India, and Australia, to embrace stronger plans to reduce their planet-warming emissions has dented hopes for an ambitious outcome from a crucial UN climate summit starting on Sunday, October 31.

A slew of national announcements just before the two-week COP26 talks kick off in Scotland has done little to advance efforts to meet global warming limits, which are set to be smashed without far steeper emissions cuts, analysts said.

China, the world’s biggest emitter of greenhouse gases, on Thursday, October 28, submitted an updated set of contributions to the UN climate body that were widely seen as offering nothing new compared with earlier pledges from its leader.

Other big players, including Australia and India, have also fallen short, while uncertainties remain around whether US President Joe Biden can get approval for domestic legislation vital to his climate plans ahead of the COP26 conference.

“China’s limited level of ambition together with insufficient pledges and policies from a number of other major countries – such as the US, India, and Australia – likely means that the COP will not deliver major victories,” said Danny Marks, an assistant professor of environmental politics at Ireland’s Dublin City University.

But smaller achievements are possible such as agreements on green energy, forest protection, and climate finance, “which would enable the UK to claim the conference was still a success,” he told the Thomson Reuters Foundation.

The Group of 20 nations, whose leaders gather on Saturday and Sunday in Rome before heading to Glasgow for the UN gathering, are expected to pledge to take urgent steps to limit global warming to 1.5 degrees Celsius (2.7 degrees Fahrenheit) – the lowest ceiling set in the 2015 Paris Agreement.

But ahead of the G20 meeting, UN chief Antonio Guterres told journalists that, while the clutch of recent climate announcements may “leave the impression of a rosier picture,” “unfortunately, this is an illusion.” The COP26 conference in Glasgow has been billed as the last major chance to galvanize the collective effort needed to limit global warming to 1.5 Celsius, with scientists calling for emissions to be cut by nearly half by 2030 to achieve that.

Two UN reports warned this week that the world is “way off track” to cap rising temperatures, with current pledges set to result in an average 2.7 Celsius temperature increase this century.

The levels of ambition shown by countries ahead of the COP26 talks “are miles off” meeting the 1.5 Celsius goal, said Dimitri de Boer, head of environmental charity ClientEarth in China.

“We call on all countries to do everything possible to further step up the transition,” he said in emailed comments.

In its long-awaited plan, China outlined aims for its carbon emissions to peak before 2030 and to become carbon-neutral before 2060, reaffirming pledges made by President Xi Jinping.

The country also formalized a commitment to raise the share of non-fossil fuels in its primary energy consumption to 25% by 2030, higher than a previous target of 20%, as well as vowing to boost its wind and solar power capacity.

Nick Mabey, chief executive of E3G, a London-based think-tank, said China’s plan was “disappointing and a missed opportunity” because the Asian powerhouse has not committed to cut its emissions this decade despite worsening climate impacts.

COP26 aims to banish coal. Asia is building hundreds of power plants to burn it. 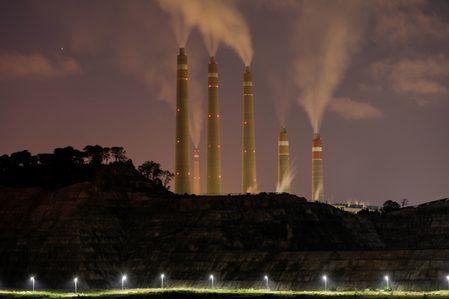 But Ma Jun, a director at the Beijing-based Institute of Public and Environmental Affairs, said the new plan was “significantly different” from China’s first submission under the Paris accord – for example, shifting its emissions peaking timeline from “around 2030” to “before 2030.”

This week, India – the world’s third-biggest carbon emitter after China and the United States – rejected calls to announce a net-zero emissions target for mid-century, saying it was more important to lay out a nearer-term pathway to slash emissions.

Australia, meanwhile – long seen as a climate laggard among advanced economies and one of the world’s largest emitters of greenhouse gases on a per capita basis – said it would adopt a net-zero emissions target by 2050.

But the plan has been widely blasted and branded a “scam” by environmental group Greenpeace, which said the goal relied on technologies that have yet to be developed and did not represent a step up in Australia’s ambition.

In addition, the climate credibility of the United States remains in question as continued haggling in Congress over legislation looks set to hamper Biden’s bid to deliver on a US pledge to cut emissions 50-52% by 2030 compared to 2005 levels.

Washington has also come under scrutiny for failing to cough up its fair share of climate finance under an unmet pledge by rich countries to raise $100 billion a year from 2020 to help poorer nations adopt clean energy and adapt to climate shifts.

Saleemul Huq, director of the International Centre for Climate Change and Development in Bangladesh, said there was a “great deal of pessimism” among the delegates from climate-vulnerable countries he had spoken to before the start of COP26.

The mood in Glasgow, he said, rekindled memories of the 2009 Copenhagen climate summit, which nearly collapsed as countries wrangled over binding commitments, ending in a weak outcome.

“Hope I am wrong,” Huq, a veteran of UN climate negotiations, tweeted from the Scottish city. – Rappler.com