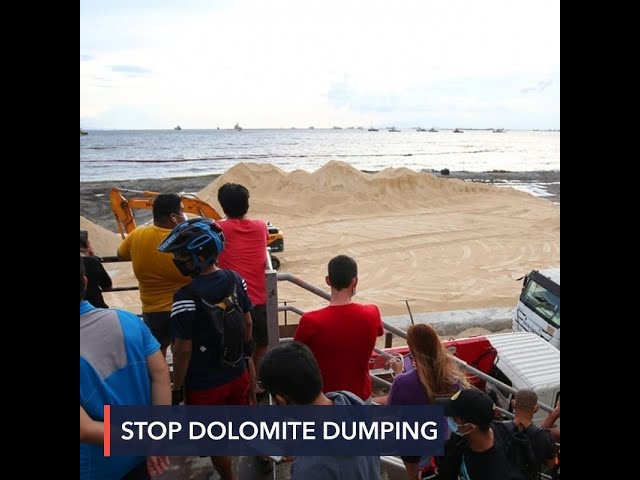 Environmentalists, fisherfolk, and church groups pushed Tuesday, September 8, for a petition to stop the dumping of crushed dolomite along the Manila Baywalk.

The groups cited the Department of Environment and Natural Resources’ (DENR) non-compliance with national laws and environmental regulations in implementing the project.

“It must be stopped as it has not undergone an environmental impact assessment nor a consultative and participatory process in both Manila Bay and Cebu,” the petition read.

Earlier, DENR Undersecretary Benny Antiporda said that dumping white sand was a “beach nourishment” project, and that it was part of the Phase 1 of the Manila Baywalk project.

According to the petitioners, because Manila Bay is an environmentally critical area, all the more should any project undergo an environment impact assessment.

Manila Bay is also a national historical landmark, construction and development projects must be permitted by the National Historical Commission.

Following the Local Government Code of 1991, big-scale projects that might affect climate, resources, and species living near the area should be consulted first with constituents of the local government.

In an online discussion on Monday, September 7, Lou Arsenio, program coordinator of the Archdiocese of Manila Ministry on Ecology, said residents of coastal communities were not informed as “they have never heard of any consultations” regarding the project.

The Cebu provincial board did not issue any permit for the extraction of dolomite rocks. Usec Antiporda earlier clarified that the “white sand” in Manila Bay was synthetic, and was actually crushed dolomite rocks from Cebu.

It was the Central Visayas office of the DENR’s Mining and Geosciences Bureau which issued the permit to extract and transport the controversial dolomite.

The petitioners described the project as “an abdication of that grave responsibility to protect and preserve Manila Bay,” citing the 2008 Supreme Court ruling mandating government agencies and local governments to focus on cleaning up and restoring the water quality of Manila Bay.

Defending the project’s merits, Presidential Spokesperson Harry Roque said that ‘beautification is incidental’ as it was also an anti-erosion and flood control project.

But if the government is to truly rehabilitate Manila Bay, the groups said, DENR must focus on addressing ecological degradation, pollution, and socio-economic issues in the area.

Aside from stopping the dumping of sand, the group called for more long-term and sustainable projects, including the rehabilitation of mangroves and wetlands and establishment of a holistic, science-based fisheries management.

In a statement, Senator Nancy Binay also called for the halting of the project, citing the agency’s non-compliance with laws.