‘A loud month, for sure’: US awaits huge, 17-year cicada hatch 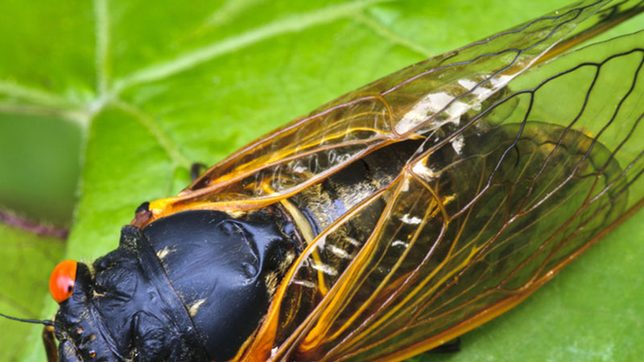 Stock photo of a periodic cicada.

Facebook Twitter Copy URL
Copied
Billions of cicada nymphs, which have been living off tree roots for 17 years, will crawl out of the ground, shed their skin, and start feeding and looking for mates

For millions of Americans, this May will be an extra noisy month. A once-every-17 year hatch of periodic cicadas is set to occur across parts of the eastern United States – and it is expected to be big.

The hatch of the cicadas, called Brood X, will take place once the warming spring soil reaches a certain temperature. Billions of cicada nymphs, which have been living off tree roots for 17 years, will crawl out of the ground, shed their skin, and start feeding and looking for mates.

It is hard to predict the exact day the hatching will start, but Dr Jessica Ware, an associate curator of invertebrate zoology at the American Museum of Natural History in New York, expects it will be sometime around May 13.

“May is going to be a loud month, for sure, for cicadas,” said Ware.

Male cicadas make a loud, chirping sound by vibrating a plate called a tymbal located on their abdomens.

Periodic cicadas are a different species from the annual cicadas that can be heard on most summer nights after dusk. Ware said scientists are not sure exactly why periodic cicadas developed such a long life-cycle, but it probably evolved as a survival mechanism.

Ware said cicadas are harmless, and their hatch provides food for birds, animals and other insects.

“It’s kind of exciting to think about Brood X emerging because the last time these individuals were above ground was in 2004. And so when you think about – a lot’s happened in the last 17 years,” said Ware.

Brood X cicada hatches will occur in the middle part of the Eastern United States, from as far south as Eastern Tennessee, all the way up to southern parts of New York. – Rappler.com