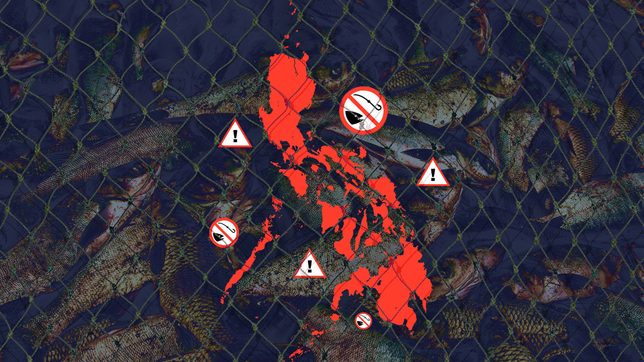 The Philippines, with its rich marine resources, is just one of the many countries in the world dealing with illegal, unreported, and unregulated (IUU) fishing in their waters.

According to a report by the United States Agency for International Development (USAID) and the Philippine Bureau of Fisheries and Aquatic Resources (BFAR), the country is losing P62 billion ($1.2 billion) annually to IUU fishing.

The Philippines already has laws that seek to address growing threats to the country’s marine biodiversity and resources, such as Republic Act No. 10654 or the Act to Prevent, Deter, and Eliminate IUU Fishing – an amendment to the 1998 Philippine Fisheries Code.

But IUU fishing, according to the BFAR, is “by nature complex and clandestine, which means data are hard to come by and substantiate.”

Although there have been data on IUU fishing in the Philippines throughout the years, these estimated figures – including the projected economic losses from such activities – are still broad and yet to be deeply understood, according to a recent interagency report.

This lack of accurate data led to efforts under the USAID Fish Right Program to create a pioneer IUU Fishing Index for the Philippines. But before knowing the numbers, what is IUU and why is it difficult to capture these figures?

Nygiel Armada, a biologist trained in fish population dynamics and chief of party of the Fish Right program, explained the difficulty in detecting and monitoring IUU fishing due to its “below the radar” nature, inadequate data, and lack of incentives for fishers to comply with the regulations, among others.

Despite these limitations, fisheries experts nationwide have come up with consensus estimates of IUU fishing and its impacts. These are the numbers from their January 2021 assessment report.

From commercial fishing, about 274,000 to 422,000 metric tons of catch per year are not reported to the BFAR. These figures still have “high uncertainty” compared to the illegal fishing estimates.

No statistics were estimated yet given ongoing discussions on the process for measuring unregulated fishing.

Armada said these figures are only “seed estimates” on the IUU fishing situation in the Philippines done through the Delphi method. The Delphi approach is a quick, iterative estimation process among diverse field experts who share their estimates based on personal knowledge and field experiences.

For the estimation process, over 50 stakeholders from national and local governments, academe, civil society organizations, and local fisherfolk participated in the IUU forecasting through online sessions amid the COVID-19 pandemic.

Armada explained that the “start-up effort” aims to eventually build a sharper data gathering and monitoring system for the Philippines’ coastal and marine areas. He hopes this could also better inform the plans and priorities of local and national governments, especially on resource protection and investments within their communities.

“You cannot respond to things you do not know,” said Armada, who shared that the BFAR and Fish Right are assisting local government units in crafting their IUU fishing reduction plans. This plan, he said, will focus on potential solutions toward fisherfolk compliance since hard enforcement alone, which strictly involves patrol and arrest efforts, doesn’t seem to be effective.

“There are different solutions to each problem. If these were three illnesses, there must be different treatments, because if you compound and think of these fisheries issues only as illegal fishing, you won’t cure the problem,” Armada said in Filipino.

Some IUU fishing solutions proposed by experts and advocates include looking into vessel monitoring measures, investing in fisheries law enforcement, and streamlining governance structures to provide clear guidance on reporting and tracking of catch.

Armada said the BFAR and Fish Right program, with support from NGOs, have assessed the IUU fishing of 136 municipalities, as of November 14. The group is also collecting success stories on combating IUU fishing across the Philippines to propose action points that will address challenges in sustainable fisheries, especially amid the trend of depleting fisheries worldwide. – Rappler.com