Carbon dioxide in the air at highest level since measurements began GREY. Cars move on a road during a day with polluted air, following the outbreak of the coronavirus disease (COVID-19), in Beijing, China February 13, 2021.

Despite a massive reduction in commuting and in many commercial activities during the early months of the pandemic, the amount of carbon in Earth’s atmosphere in May reached its highest level in modern history, a global indicator released on Monday, June 7, showed.

Scientists from the National Oceanic and Atmospheric Administration (NOAA) and the Scripps Institution of Oceanography at the University of California San Diego, said the findings, based on the amount of carbon dioxide in the air at NOAA’s weather station on Mauna Loa in Hawaii, was the highest since measurements began 63 years ago.

The measurement, called the Keeling Curve after Charles David Keeling, the scientist who began tracking carbon dioxide there in 1958, is a global benchmark for atmospheric carbon levels. 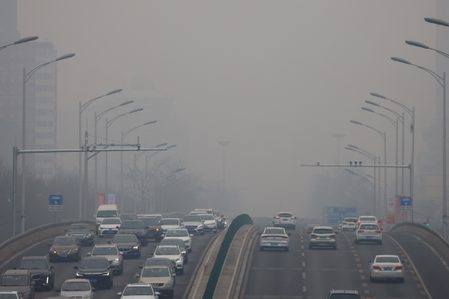 Because carbon dioxide is a key driver of climate change, the findings show that reducing the use of fossil fuels, deforestation, and other practices that lead to carbon emissions must be a top priority to avoid catastrophic consequences, Pieter Tans, a scientist with NOAA’s Global Monitoring Laboratory, said in a report on the emissions.

“We are adding roughly 40 billion metric tons of CO2 pollution to the atmosphere per year,” Tans wrote. “That is a mountain of carbon that we dig up out of the Earth, burn, and release into the atmosphere as CO2 – year after year.”

The amount of carbon in the air now is as much as it was about 4 million years ago, a time when sea level was 78 feet (24 meters) higher than it is today and the average temperature was 7 degrees Fahrenheit higher than it was before the Industrial Revolution, the report said.

The carbon dioxide levels measured were not affected by the eruption of Hawaiian volcanoes, Tans said, adding the station is situated far enough from active volcanoes that measurements are not distorted, and occasional plumes of carbon dioxide are removed from the data. – Rappler.com