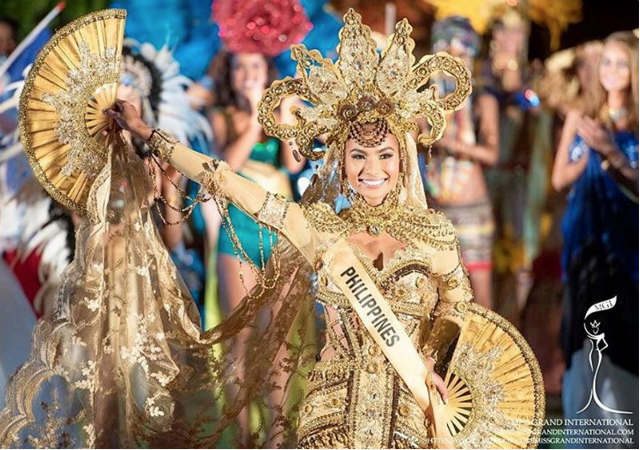 A photo posted by Miss Grand International (@missgrandinternational) on Oct 25, 2015 at 6:40am PDT

Parul’s costume was designed by Edwin Uy. According to Parul, the costume was inspired by a Muslim Maranao princess.

Last August, Binibining Pilipinas Charities Incorporated (BCPI) that Parul will represent the country in the Miss Grand International. Parul initially thought she was not going to compete anymore as she placed in the 2014 Binibining Pilipinas pageant and did not compete in an international pageant in 2014, while a new batch of queens was crowned in 2015.

“I thought I wasn’t going to have a pageant. And so when I got the call…I was like ‘okay…’ but now I’m excited. When you waited for too long, that’s how I felt. But now, I’m happy that I have a pageant because we all worked hard for where we are all right now.”

Miss Grand International (MGI) is a Thailand based pageant founded by Nawat Itsaragrisil in 2013. According to the information on the pageant’s website, the competition aims “to become the world’s leading international beauty contest under sponsorship from governments and organizations that will make a stand for the betterment of humanity.” The pageant also promotes peace through their Stop The War And Violence campaign.

Prior to BCP getting the Miss Grand International franchise, John De La Vega, who also trains beauty queens, was the pageant franchise holder in the country. – Rappler.com